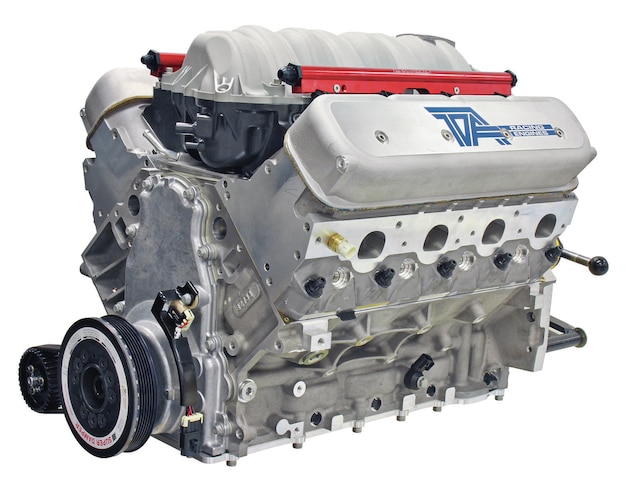 First of all: Yes, the intake manifold shown in our lead photo is backwards. That's intentional, for reasons we'll go into in a moment. But the larger question should be, Why would anyone want to take a perfectly good, 427-cube LS7 and make it smaller?

After all, the LS7 was envisioned as a large-displacement sledgehammer for the racetrack. In a 3,200-pound Corvette Z06, it's rated at 505 horsepower and 470 lb-ft of torque, enabling some truly world-beating performance from a more or less stock vehicle. But for dedicated race cars that have been significantly lightened--even those only wearing a Corvette skin over a custom racing chassis--the parameters and optimal performance range for an engine change.

Such was the case of a racer who recently walked into Thomson Automotive, a cutting-edge LS-engine builder that is no stranger to this magazine. The racer was looking for an engine that would deliver higher-rpm power in a car that would weigh more than 1,000 pounds less than a Z06. Along with road-course capability, the car was also intended for flat-out, top-speed contests such as the Texas Mile and the Silver State Classic Challenge.

"He wanted an engine that made around 600 horses and spun to 8,000 rpm or more, to provide long, sustained horsepower for high top-end speeds," says Brian Thomson, the shop's founder. "We've got an LS7 package that makes 630 naturally aspirated horsepower at 7,000 rpm and almost 600 lb-ft of torque, but that wasn't going to fit the bill for this project."

Indeed. Besides the stock- displacement LS7 not providing the desired rev range, the nearly 600 lb-ft of torque--coming on strong at low rpm--was more than the lightweight car needed, as it would make tire spin problematic. And while 600 hp could be coaxed out of the small-displacement LS3 engine, it couldn't be done as easily, and there was still the issue of revving it safely beyond 8,000 rpm.

"The great airflow of the LS7 heads is what we really wanted for high-rpm horsepower, but we just didn't need all the torque," says Thomson. "It became clear that de-stroking the LS7 would not only help trim some of the low-end torque, but help the engine spin to 8,000 rpm, too."

A few taps on the calculator brought the configuration into focus: By cutting the LS7's stroke from 4.000 to 3.625 inches and maintaining the stock 4.125-inch bores, the displacement would be 388 cubic inches (6.35 liters). It would also make this short-stroke LS7 an "over-square" engine, with a 1.14 bore/stroke ratio. A "square" engine has equal values for the bore and stroke dimensions, for a 1:1 ratio.

An over-square engine configuration is ideal for high-rpm horsepower--it's how Formula 1 engines rev to seemingly impossible plateaus of 13,000-plus rpm--because the shorter stroke minimizes the maximum piston speed. That reduces power-robbing friction and heat, while also reducing stress on the crankshaft. And because these traits favor high-rpm horsepower, an over-square engine typically makes its peak torque higher in the rpm band, too, which is just what this racing-engine project called for.

"The short-stroke concept is by no means a new one, but it's not typically associated with LS engines, which are known for making big power down low," says Thomson. "With the right camshaft and a few other key components, the 600-horsepower level shouldn't be a problem--even when taking nearly 40 cubic inches out of the displacement."

The dyno test would prove Thomson right on his performance prognostication, but more on that in a moment. For now, let's take a look at some of the supporting components in this unique combination:

The factory reciprocating parts were replaced with all-new, all-forged components, including Oliver 6.125-inch rods hung on a Callies Dragonslayer crankshaft. The rods are actually longer than the stock 6.067-inch LS7 units, which is a good thing in a high-rpm engine because it reduces the rod ratio.

The stock, as-cast LS7 were machined to accept the Jesel rockers for unflappable ultra-high-rpm performance, and the valves were swapped for Del West Engineering titanium parts on both sides.

A new FAST 102mm intake manifold for LS7 heads was used to maximize high-rpm airflow. It was used with FAST fuel rails and a stock LS7 90mm throttle body.

As for the reason the intake is turned around on the engine, it's to match the unique air-intake system the engine's owner developed for the car. The manifold bolts right up in either direction, so its installation in the reverse position was not an issue.

For an engine builder who is used to building bigger-inch LS engines that make boatloads of torque at low rpm, the dyno details of this short-stroke LS7 must have seemed almost alien, but they nonetheless hit the mark for the project. Here's the bottom line: 615 hp at a lofty 7,200 rpm and 506 lb-ft of torque at 5,800 rpm.

With the excellent airflow characteristics on the smaller-displacement engine, it was up to the camshaft to deliver the horsepower. It did, with the wide, 115-degree LSA working with the mild lift and duration specifications to optimize performance to the outer reaches of the rpm band. A wider LSA enables the intake valves to open and close later, and the exhaust valves to open earlier. That reduces overlap, fosters a broader, flatter torque curve, and enables the power to hang on at higher rpm.

A look at the accompanying dyno chart bears this out: The torque curve isn't so much a curve as it is a gently sloping arc. It takes nearly a 2,500-rpm sweep to go from 416 lb-ft at 3,500 to the peak 506 lb-ft at 5,800 rpm--and even after that, the torque doesn't drop off a cliff. It simply recedes at the same basic rate. In fact, the torque is essentially the same at 6,100 rpm as it is at 5,100 rpm. It's smooth, predictable, and controllable in a lightweight race car, especially with the peak torque not occurring until nearly 6,000 rpm.

And on top of it all, this shorter-stroke, smaller-displacement engine still made 35 lb-ft more than a stock LS7.

As for the power, it comfortably exceeded the 600-horse target and did up at the far end of the tachometer, just as designed. And like the torque values, the power came up smoothly and predictably. In fact, the wide LSA of the camshaft also gave this racing engine a decidedly docile idle quality. We could totally see this combination working in a street car, minus the racing-spec oiling system, making it more than a contender for some of Europe's high-winding exotics.

Just for kicks, we looked up the specs on some of those exotics, and here's how this engine compares with them:

If nothing else, this comparison validates the viability of the cam-in-block, overhead-valve LS architecture in producing high-rpm horsepower. It bettered the lot of those other engines, and did it with two or four fewer pistons. It's enough to make you chant "U-S-A! U-S-A!"

"It really is a sweet, high-rpm engine," says Thomson. "We figured out that the customer's car will theoretically do about 240 mph with it--if he can find enough room to wind it out."

And does Thomson recommend a similar combination for those whose street-driving plans are a little less ambitious?

"With the extra weight in a production-based Corvette, you'll definitely notice the lack of low-end torque," he says. "But if you really like the feeling of ultra-high-rpm power, it works great, and the driveability is excellent."

We'll point out that while Thomson suggests the engine is low on torque, the stock 6.2-liter LS3 makes 423 peak lb-ft at 4,600 rpm and his 6.4-liter engine made 474 lb-ft at the same rpm level. It also makes 400 lb-ft by about 3,000 rpm, which is hardly chump change in our book. So, while it may not have the sheer grunt of one of Thomson's supercharged engines, it's hardly lacking for pound-feet. And you've never heard anything as melodious as an LS engine pushing beyond 8,000 rpm.

Defying convention has never been a worry for Thomson Automotive, and this high-winding, short-stroke LS7 is the perfect example, as it proves the exception to that old adage about there being no replacement for displacement.

Maybe it should be changed to, "There's no rpm like high rpm."