Upgrading an early C3 with an electric wiper-door actuator from elite custom pain and body. 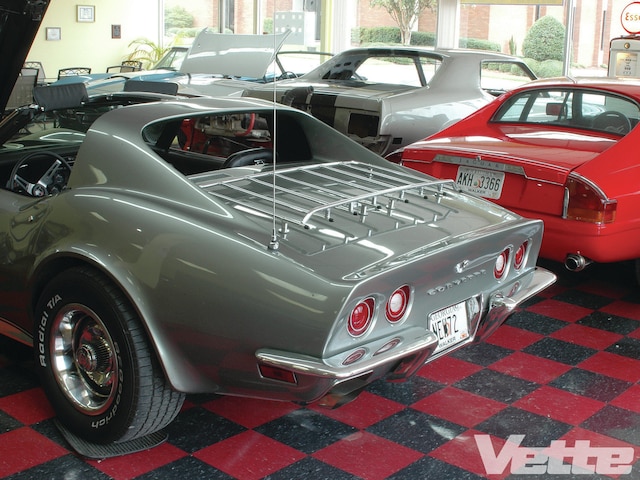 When you walk into the front room of Wolfgang Geiger's shop, Elite Custom Paint and Body (ECPB), with its red-and-black checkerboard floor, the first thing you notice is not necessarily Corvettes. Oh, they're there alright--the Top Flight '67 427 drop-top, the stripped '69 'vert, the metallic silver '72--but they're very much not alone. On one side of the '72 is a '53 Ford pickup in Pepper Gray metallic paint with a supercharged Cobra engine and C4 Corvette suspension. On the other side--lined up with the midyear and the stripped shark--are a '69 Mustang and a pair of Jags, one an E-Type V-12, as well as a totally idiosyncratic Italian Autobianchi Bianchina. Not to mention the straight-eight Packard engine on a stand (the Packard's body is in the paint booth), equipped with period-correct go-fast goodies, or the rare Saab coupe in the back.

All of which is to say, with the broad variety of cars he works on, Geiger understands the problem that confronts those of us who actually drive older Corvettes: there's a lot of stuff that just doesn't work.

Take, for example, my first Corvette, a blue '71 four-speed 'vert powered by a warmed-over 454, a car I actually used as a daily driver at one point. Lowered, stiffened, Bilsteined, and built with malice aforethought, it was a raw, elemental thing. And without air or functional heat--to say nothing of defrost--you broiled in the summer, and arrived well-chilled in the winter.

It was also a car whose defining characteristic was that it constantly seemed bent on killing you--not only because of the power and the perpetually insubordinate rear suspension, but also because the windshield-wiper door wouldn't open. Although ill-advised and arguably illegal, it is possible to drive through the rain in daylight without wipers. But not at night, a lesson I learned the hard way on a winding Tennessee two-lane. Dead at eye-level, the oncoming headlights turned the windshield into a glaring sheet of blindingly white droplets. The only thing I could see was the guy behind me... Who appeared to be wearing a cloak and carrying a scythe.

Enter my current Corvette, a red '72 coupe in much better condition, but still with a non-functional wiper door. I've tried rolling down the window and holding the door open while driving, with predictably poor results. On a couple-thousand-mile road trip to the coast this summer, I actually zip-tied the sucker open after the Rain-X I had applied ceased to be effective. That worked, but looked as ugly as homemade sin.

While I've heard rumors of wiper doors that actually function on other people's Corvettes, they remain to me as the res cogitans of RenÚ Descartes--a purely immaterial thing, unconnected to physical, experiential reality. Reenter Geiger and ECPB. As the second of a pair of vacuum-operated systems Geiger was charged with replacing on a customer's '72 coupe (see last month's article covering the headlight-actuator fix), the wiper door found on '68-'72 sharks is particularly troublesome. Among other things, the door itself operates in an arc, which means a simple piston moving in a straight line won't do the trick.

After experimentation, Geiger, himself an electromechanical engineer, created a system using the same basic electric actuator used for his headlight conversion, but with a housing that allows the actuator to move, following the arc of the opening wiper door as it extends. As with the headlight actuators, we'll follow ECPB's installation of the wiper door system on my red '72 coupe.

Admittedly excited once the installation was complete, I actually hoped for rain on the way back home from ECPB. No luck that night, but we've had plenty in the month or so that's passed since then, and the wiper door performs as advertised. Almost anticlimactically, you click the switch over, the wiper door opens, and bang, you can see. Considering my past experience with the vacuum-operated wiper doors, I'm still not quite used to the idea of the wipers working (call me Pavlov's dog), but work they do.