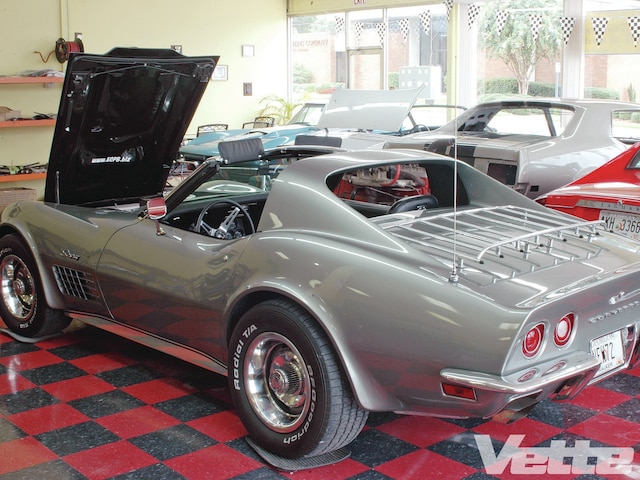 There are certain things on the C3 Corvette that were simply designed to be non-functional. Yes, I have the clock and the e-brake in mind, but I'm also talking about the headlight covers and the wiper door. I can't vouch for how they worked when brand-new, but I've owned two sharks, and neither of them had headlight assemblies that functioned reliably. And when they did work, they only went up and down using the override switch under the dash, and never with the light switch itself.

Oh, sure, one might work, leaving you winking your way down the roadway, or both would stop working, forcing you to get out of the car and pull them up when it got dark. The problem is especially vexing on the chrome-bumper cars, which, as we know, have a high CDI factor. For those unaware of this judging criterion, the CDI factor is an objective measurement that's crucial in evaluating the performance, appearance, and general je ne sais quoi of a car. It stands for "Chicks Dig It."

No matter how high that factor is for your car, when you're out on the town, there's nothing impressive about having to get out and pull up your headlights. Yeah, you can smile at the pretty girl in your passenger seat through the windshield as you try desperately to wedge your fingernail under the cover to pry it up, but it's pretty hard to look cool doing that. Trust me.

And once they're up, there's nothing cool about lying down in the parking lot so you can reach up under the grille and pull down the armature to fold them closed. (Eventually, I learned a half-pushup maneuver that kept me from having to literally lie down on the ground, but that lost its charm after I fell over in the Post Office parking lot. See above comment about looking cool.)

So we know they're a problem, and even when you've recently replaced the little witches-hat pieces, they won't last in perpetuity. Passing over the obvious, tired joke about vacuum systems in general, the headlights are devilishly hard to troubleshoot--no multimeters here, folks. Even when the system is all sealed up, it still depends on vacuum produced by the engine, which means both that it has to be running in order for them to work, and that their function will be affected by mods (such as a performance cam) that change the amount of vacuum the engine produces.

Now that we've outlined the problem, let's talk about the solution. When Wolfgang Geiger took on a '72 coupe, nicknamed "Rebecca," for a complete restoration in his shop, Elite Custom Paint and Body (ECPB), the owner had already had enough of the stock system. Among the modifications, which included EFI and a gorgeous Steel Cities gray paint job, were firm instructions from customer Bill Ray to eliminate the vacuum system entirely. As the car neared completion, Geiger realized that there wasn't a kit available that would let him replace it with an electric alternative. Perhaps underestimating how committed the customer was to getting rid of the vacuum, Geiger apologetically told him that while he was sorry, it couldn't be done.

"You are an electromechanical engineer, aren't you?" he asked.

"Well, yes," Geiger answered, not quite sure what to expect. Whereupon Ray simply walked out. Three days later, with the help of Sean Broome, Geiger had fabricated a set of electric actuators and had them installed. While that may seem like sacrilege, never forget that C2 headlights were electric instead of vacuum, as were C4 and C5 units, leaving the vacuum-operated C3 lights as an anomaly.

The story wasn't over yet--there was still the wiper-door issue to surmount--but the headlights were well and truly dealt with. Triggered by the headlight switch, the electric actuators pivoted the lights smoothly up in sync with one another. With that done, the customer wanted to know when Geiger would start selling the conversions separately. Since ECPB works on other cars in addition to Corvettes, Geiger wasn't particularly enthusiastic about the proposition. "Who would want that?" he asked.

Now is when those of us who own sharks chuckle, by the way. Relentless, Ray finally convinced him, actually bankrolling the first batch of the kits. His car, Rebecca, became the demo car that attended the shows (Geiger actually added a remote control to it just to catch people's attention when they saw the lights open on command), and the conversion is now offered for sale by Eckler's, Rik's Corvette Parts, and Corvette Central.

Having seen Rebecca at the Sevierville, Tennessee, Corvette Expo, I had the opportunity recently to visit ECPB and follow the installation of the electric actuators on my own Corvette, a red '72 coupe, which suffered all the typical vacuum-based maladies.

It's been said that the mark of a good sound man is that you never think about him, and that's the way Corvette headlights should be. It's been three weeks since the actuators were installed, and the most impressive thing about the conversion is that I never worry about the lights anymore. I just pull the switch, and up they come.