Soda Blasting Is A Safe, Environmentally Friendly Way To Return Your Corvette's Fiberglass To Fresh-From-The-Mold Condition 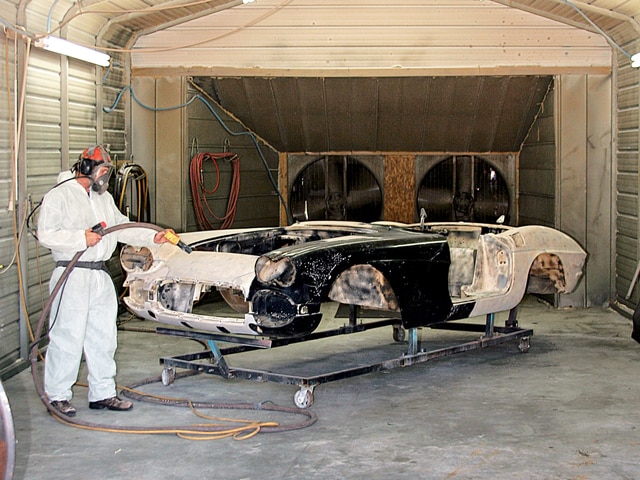 There's nothing like a nice, clean slate. In fact, it's the thing car-guy (and -gal) dreams are made of-no layers of old paint, no hidden surprises, and instant access for bodywork.

When it comes to stripping our Corvettes down to the bare basics, there are three options: chemical strippers, by hand with sandpaper and other tools, and media blasting.

Obviously chemical paint removers aren't the first choice. When you're talking about stripping the paint from a Vette, chemical agents are always discussed, with the same conclusion: not many people trust them. Let's face it-fiberglass isn't steel, so there's a pretty good chance a chemical stripper will either attack the fiberglass, or seep into it and ruin any chance of achieving a good paintjob down the road.

Manually, you can use sandpaper either mounted on a dual-action sander and "jitterbugs," sanding blocks and contoured sanding pads, razor blades, or our personal favorite method, a wet sponge and baking soda.

Sanding a car by hand gets the job done, but it's not only time-consuming, it's incomplete: You don't typically get inside the trunk or body, under the hood, and so on. We've actually seen whole cars stripped with razor blades, and it's not nearly as hellish as it sounds. Once you get a good rhythm going and the razor's angle of attack right, it goes pretty quickly. (And for fun, you can sweep all the flakes into a bag and weigh how much paint your car had on it!) But sanding the car or giving it a close shave really only hits the easy spots-the exterior surfaces, the doorjambs, and maybe a couple hidden areas if you're aggressive. And heaven help you if the car is wearing several layers of paint stacked on one another.

That's why media blasting is one of the best methods of stripping Corvettes. There are some serious concerns with this approach, though, mainly that it can destroy the car if done improperly.

Media blasting is exactly what it sounds like: A medium-be it crushed walnut shells, sand, glass, plastic pellets, aluminum oxide, or a myriad of other materials-is run through a hose and launched at the car under very high pressure, just like in your home bead-blast cabinet. As the medium hits, it blows, strips, or tears off bits of paint, filler, and possibly fiberglass, depending on the material used.

One of the things we don't like about most media is that the residue gets everywhere in the car. We've seen blasted cars spill little piles of sand or walnut shells when rotated on a rotisserie, placed on a trailer, or hit with any kind of high-pressure air-like from a spray gun during the painting process.

One material that's made a big impact on the industry in recent years is baking soda. Soda blasting doesn't hurt chrome trim, glass, rubber, aluminum, or fiberglass, yet it has no problem pulling off paint, filler, undercoating, and seam sealer. Unlike other media, soda granules are soft and comparatively delicate, exploding on impact and turning to dust. (For this reason, the soda can't remove heavy rust on chassis components or other metal pieces.)

According to Lanny Porter, owner of NuTech Refinishing in Jefferson, Georgia, the exploding soda absorbs the energy, rather than transferring it to the base material. This is why it can be used on soft metals, glass, and fiberglass. Even so, it can still do damage because it is fired at the car at such high velocity. For this reason, an experienced hand is necessary, especially when working with fiberglass.

Original Corvette body components have a smooth resin finish without gelcoat, while aftermarket replacement panels are usually gelcoated. "Removing paint from gelcoat is easy to do without harming the gelcoat," Porter tells us. "It takes effort to remove gelcoat using soda. But the resin finish isn't as hard, and can be damaged with the baking-soda process if done improperly."

Sometimes cars have what Porter refers to as "rotten 'glass," and that can be a problem for soda blasters. "This is fiberglass that has deteriorated, possibly from previous chemical stripping where the chemical was left on too long, or sometimes [the fiberglass] just aged. The minute you blast that area, it looks like you blasted cardboard," Porter says. "Normal hand-sanding may not have brought this to light, and the area may have been painted over without anyone knowing it was bad. This would be an area that needs to be repaired, because it can affect the paint further down the road, resulting in a much more costly repair and repaint."

After the blasting process, a residue remains that acts as a natural rust inhibitor for steel, preventing flash-rust for long periods of time (depending on your regional humidity and proximity to the ocean, of course). While this coating is also on the fiberglass afterwards, its rust-inhibiting properties obviously don't come into play there.

It's this coating that has earned soda blasting a bad name. Soda has a pH value of 8.4, and it needs to be neutralized and washed away before the body can be painted. If the body isn't thoroughly washed, problems with paint adhesion will result down the road.

"The only thing soda blasting has against it is the reputation for paint lifting," Porter tells us, "but that comes down to human error, not the soda. Just like mixing and applying paint or body filler, there is a proper procedure that has to be followed to make the product work properly."

As a dust, the soda can be blown out with an air gun, but no matter how thorough you are, it will remain in really hard-to reach areas. It's water soluble, however, so a thorough power washing will completely dissolve any powder that remains. Initially, end users used straight water, or added vinegar or some other chemical to neutralize the soda, but it didn't get the job done (not to mention that vinegar and water would flash-rust metal pieces in hours).

Soda Works, the equipment supplier Porter uses, recommends using a chemical called "Holdtight 102," a food-grade, environmentally friendly chemical that changes the surface tension of water "so it can microscopically remove contaminants from substrate," says Porter. It also contains a flash-rust inhibitor and salt remover. After power washing the car with the Holdtight solution, you have a 48-to-120-hour window to get steel pieces in primer before it starts to flash-rust; fiberglass doesn't require any other special care. Soda Works trains its technicians to thoroughly wash and neutralize the soda prior to giving the vehicle back to the customer. "Washing and neutralizing the vehicle should be part of the service for the customer," Porter adds.

It's been commonly written that soda blasters can remove one layer of paint at a time. "Well, I'm not going to say it can't be done, but it completely depends on the experience of the man doing the blasting, how much pressure he's using, and a variety of other factors," says Porter. In other words, don't plan on stripping a car down to its original paint.

Corvette-restoration specialist Alley Cats of Georgia has used NuTech to soda blast several Vettes over the years, and it was the shop's first choice when Mark Penk brought in his mother's unrestored '62, which she bought new. We were there while the team knocked the surface down until it looked fresh from the molds.