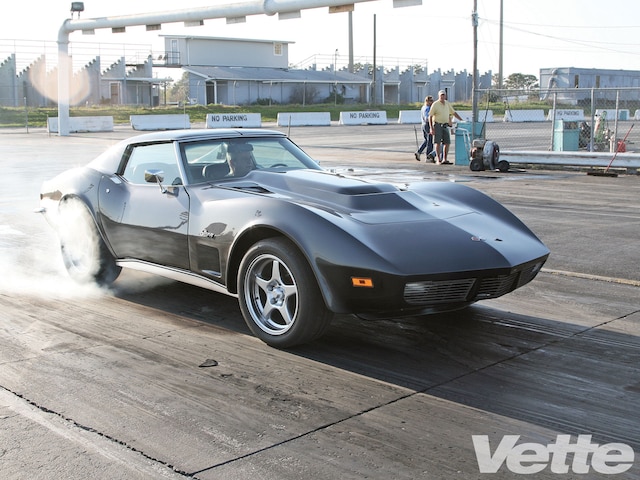 The positive attributes of the Corvette are many and varied, but superb handling may be the single feature that's most often associated with the marque. Wanting our car to live up to this high standard, we decided to improve its performance and aesthetics with some modern front-suspension components from Speed Direct.

Speed Direct has been supplying Corvette steering, suspension, and other components to performance-minded owners for some time now, offering several levels of performance and adjustability for early Vettes like ours. Checking out the company's website, we decided that a pair of aluminum control arms would help Project C3 Triple-Ex by shedding nearly 10 pounds of unsprung weight from the front end while improving suspension geometry by allowing increased positive caster. These control arms also help stability and handling, reduce bumpsteer, offer improved geometry, and allow greater adjustability than the factory stamped-steel units. We also ordered a set of single-adjustable front shock absorbers and new coilover springs to replace the factory components on our car.

Though it was tempting to order Speed Direct's double-adjustable front shocks, we decided that since our car will see track duty less often than it sees the street, the simplicity and adjustability of the single-adjustable units made more sense. These shocks are race inspired, with velocity-sensitive valving, and are adjustable in rebound. Used with Speed Direct springs, they also offer four inches of ride-height adjustment, so achieving a proper stance shouldn't be a problem. Since we'd already upgraded our car's cooling system with an aftermarket radiator and dual electric fans, we had room for another beneficial front-suspension component: a spreader bar.

Speed Direct's spreader bar attaches between the upper control arms to add a lateral brace to the front suspension at the point where flex is at its worst. This upgrade should reduce the tendency of the factory frame to flex torsionally as the car is driven aggressively through the turns. Made from billet aluminum with Heim-style rod ends, it also looks great. The spreader bar bolts directly to provisions in the Speed Direct upper control arms for a simple installation, but it's also compatible with factory arms if your car is so equipped.

With our parts on the way, we put C3 Triple-Ex on the rack to began disassembling the front suspension. Though we used a lift, jackstands, and a transmission jack to complete the work, it can also be easily accomplished by using a floor jack and jackstands. The only specialty tool required for the job is a ball-joint separator; otherwise this installation requires only basic handtools. Of course, the front end will need to be realigned after performing this kind of suspension work, but to ensure proper four-wheel alignment, we'll accomplish that task after installing a new rear suspension in an upcoming issue.

When our Shark Bite components arrived, we found them to be professionally packaged and clearly marked, with great instructions included. With very little trouble, we had our new front-suspension pieces installed in a day, and adjusted the ride height quickly with the spanner wrenches provided in the kit. We chose the stiff 550-in/lb rate springs for some aggressive driving and planned autocrossing, but Speed Direct also offers springs with more conservative rates, making them suitable for small- or big-blocks and anything from street to all-out race machines.

Follow along now as we dramatically improve our C3's front suspension, giving it better road manners, the adjustability needed for the track, and a lower stance. And be sure to watch future issues to see us eliminate the rear transverse leaf springs in favor of Shark Bite adjustable coilovers. After that, we'll take our C3 Triple-Ex out for road and track testing!