Newsletter
Sign Up today for our FREE Newsletter and get the latest articles and news delivered right to your inbox.
Home
Camaro Performers
How To
Transmission 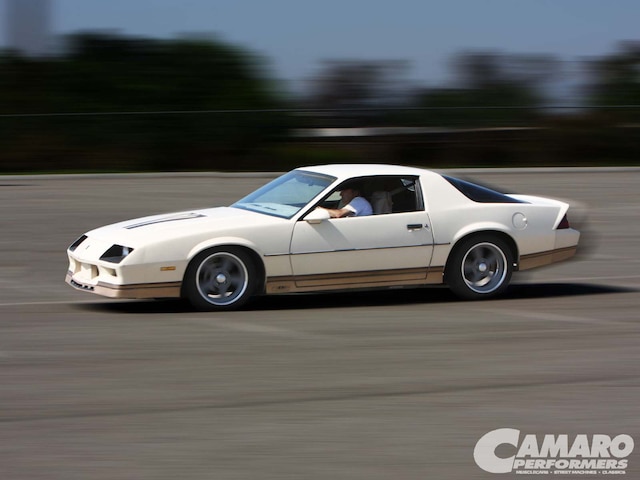 While the gas crunch that rang in the ’80s can be held responsible for the sub-200 hp “muscle cars” that were jammed down our throats by the Big Three in those days, it also brought us a grip of new technology. At the outset, innovations such as computer controls and electronic fuel injection that were deemed necessary to lessen harmful emissions and increase fuel mileage were unsettling and unwelcome, mostly due to our lack of familiarity with their inner workings. But it wasn’t long before the aftermarket embraced (read “found a way to modify”) this equipment as is evident by their place in today’s hot rods.

Possibly the best piece of new equipment to come out of the ‘80s was the overdrive transmission. And today you’d be hard-pressed to find a hopped up muscle car in any garage or car show without a four-speed automatic, five- or six-speed manual, or an auxiliary overdrive unit. While these babies made their way onto Detroit's assembly lines because of their decreased fuel consumption, we quickly found out that they made our high-performance rides more drivable (and fun to drive). We've heard more than one enthusiast make the claim that an overdrive was “the single biggest performance improvement” he had made to his car. With the advent of overdrive, the disadvantages of adding stiffer rearend gears, a slippery converter, and more camshaft barely enter into the debate. Now you just do it because having the extra gear makes it all easier to live with.

The 700R that was putting the power to the ground in our Crossfire Z was first introduced by Chevrolet in 1982, and would eventually replace the Turbo 350. It offered a new lower 3.06:1 first gear and a 30-percent overdrive fourth gear. The originals did have some inherent problems and were prone to failure, especially when put behind anything with decent horsepower. The best thing that ever happened to these transmissions, renamed in 1990 to 4L60, was the conversion in 1993 to a computer-controlled shifting system. Designated the 4L60E, the electronic trans uses a computer to provide unlimited shift point and pressure adjustability as well as eliminates the often-problematic throttle valve (TV) cable adjustment. With 25-plus years of refinement, and the hard work of aftermarket experts like the folks at Phoenix Transmission, it’s now possible for these transmissions to handle almost 600 hp.

Using a long 15mm box wrench for leverage and a flywheel tool, we removed the torque converter bolts.

One dilemma you will have when installing a late-model trans into your early-model car is determining how to drive the speedometer. The unit in our ’83 is cable-driven, and since the 4L60E doesn’t have a provision for a cable, and we didn’t want to change to an electronic speedometer, we chose to use a manual speedometer conversion kit (PN SW41, $400) from SW Fabrication in Texas. The kit includes a new, modified tail housing, speedometer sleeve and driven gear, vehicle speed sensor (VSS), and reluctor/drive/bushing assembly. You’ll have to provide SW with the gear ratio and tire height for your vehicle so they can provide you with the correct speedometer gear

The new reluctor/drive/bushing assembly is then slid onto the shaft. We gently tightened only one of the set screws that held the assembly into place as we needed to test-fit it with the tail housing installed.

The drive gear must be located in the center of the opening in the tailhousing where the speedometer sleeve and driven gear will be mounted. You can slide the gear back and forth to get it to this position. Once eyeballed into place, we pulled the housing back off to loctite and tighten the set screws on the gear assembly.

With the trans still hanging freely against the trans jack, we re-connected the rigid transmission lines, speedometer cable and shift cable, and dipstick tube. The newer model transmission does not accept the converter lock-up harness. This will be handled through the stand-alone transmission computer. We’ll show you how to install that in our next issue. We then added a new polyurethane transmission mount (PN 3.1108R, $21.95) from Energy Suspension for the transmission to rest on.


Not wanting to leave anything to chance, we greased up the speedometer drive gear and installed it to make sure that it was meshing properly with the driven gear/reluctor assembly. A few revolutions of the driveshaft verified that we had it all aligned correctly. After seating the assembly into the tailhousing by hand, we fastened it with the retaining bracket.


To mount the new transmission, we used one of BMR Fabrication’s torque arm relocation crossmember kits (PN TCC017, $254.95). This crossmember incorporates a mount for the torque arm so that it no longer needs to attach to the stock aluminum transmission tailhousing. This will eliminate the chance of breaking the housing at the stock mounting points. The crossmember also gives you multiple mounting points to allow for fine-tuning of the torque arm, and launch characteristics of the car.


The BMR crossmember kit uses all of the stock mounting holes. Notice the torque arm mounting plate to the left of the transmission housing.

THE GUY S BEHIND THE GUTS
Phoenix Transmission’s Street/Strip 4L60E features their high performance pump, special valve body and servo assembly, steel-bonded apply pistons, 29-element input sprag, special modified sun gear shell, increased clutch capacity, and a host of other modifications. The 2500-stall Street/Strip torque converter they sent us was built with a carbon clutch, furnace brazing, and a hardened hub. They’ve been rebuilding high performance and specialty transmissions since it was founded in 1983. Greg Ducato and his staff are dedicated to producing the highest quality, custom-tailored transmissions and torque converters for discriminating customers.

Once the internal parts have been hand and machine-washed, and inspected a third time, they go to the polishing station where all contact surfaces are lathe-polished. This prolongs bushing and washer-wear, especially in high-rpm applications.
Each transmission and torque converter ordered are custom-built to the vehicle’s individual specifications including shift points and torque converter stall speed. Every Phoenix transmission undergoes an eight-step cleaning and inspection process, which produces a semi-polished finish on the aluminum case. It’s both pleasing in appearance and stress relieved for added strength.


Phoenix builds their torque converters in-house on the latest computer-controlled equipment and every unit is computer-balanced. Thoroughly dyno-testing each transmission before it leaves their Texas facility allows Phoenix to guarantee shift accuracy, stall speed and internal line pressures, and offer a two-year, 24,000 mile warranty that doesn’t begin until your transmission is in service. This gives the builder plenty of time to complete their project without worry of running out of warranty before the car is finished.


While it was off, we decided to replace the stock torque arm with a BMR adjustable tubular arm (PN TA001, $329.95). Like most OEM parts, the stock arm was built with cost as its main consideration, so flimsy stamped-steel was used for its construction. The BMR arm is MIG welded and made using 1.25x0.120-inch tubing and heavy-duty ¼-inch mounting plates.


The front end of the torque arm mounts with a polyurethane bushing that is encapsulated in a clam shell bracket which fastens to the mount plate on the crossmember. BMR provides several different torque arm mounting positions based on the horsepower of the car. Since we’ll never see more than about 400hp, we used the top-most location. On a 9- to 10-second car, this would provide enough leverage to put it on its bumper, but it will work wonders for a 12- to 13-second ride.


The final step of the torque arm installation was to set the pinion angle. This requires the use of a magnetic protractor, which BMR includes with every torque arm. BMR’s instructions call for the pinion angle to be measured with the suspension loaded (either by resting the car on the ground or resting the rear end on jack stands). You’ll need to place the angle finder on the driveshaft and record the angle. Then place the angle finder on the rearend torque arm mounting plate and record that angle. Adding the two measurements will give you the pinion angle (for example, -3 rearend angle plus +1 driveshaft angle = -2-degrees). BMR recommends that F-bodies with automatics be set at 1- to 2-degrees negative. Turning the adjuster on the torque arm will allow you to fine-tune your angle to the desired setting. A bit confused? Visit www.bmrfabrication.com  to view a video with step-by-step instructions.

In preparation for the arrival of our 400hp Dart SHP engine on our 1983 Chevy Camaro, Project Crossfire Z will be receiving a 12-bolt rearend to handle the 400hp and more. - Camaro Performers Magazine

Preston Edmunds purchased the 1983 Chevy Camaro at the riple age of 16, and for 18 years he has put lots of hard work to get a super-clean machine that is plenty fast, too. - Super Chevy Magazine

Read all about the 24 hours of LeMons racing we engaged in and see what worked and what did not. Only at www.chevyhiperformance.com, the official site for Chevy High Performance Magazine!

It's time for the second part for the completion of the 4L60E transmission into your third-gen camaro by installing a TCI electronic Transmission Control Unit to call the shots of the transmission. - Camaro Performers Magazine

There's not an aftermarket part that we have run across that doesn't excite us even a little bit, although some are definitely farther up on the fun chart than others and a good radiator on our 1983 Chevrolet Camaro is needed. - Super Chevy Magazine