TREMEC Five-Speed for Your C3 Corvette 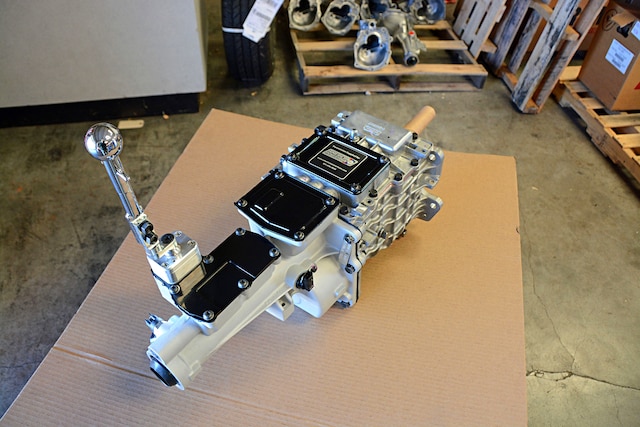 Three pedals and four gears, it’s the stuff of legend in the world of early Corvettes. If you have the big-block with three-deuces, you can even relate to the old Beach Boys song featuring the line “three-deuces and a four-speed.” As fate would have it, our 1971 Corvette project car came with merely two pedals, and Editor Brian Brennan, being a guy who prides himself on being able to mix things up (we’ll let you interpret that as you like) decided it was time to ditch the old automatic in favor of a stick shift car so he could mix his own gears.

At first, a four-speed gearbox was considered, but as we know, the times they are a changing and today the four-speed tranny has gone the way of surfer music. Our early Corvettes often take to the modern highways where cruising at 70+ mph is the norm. Doing that with an original four-speed tranny generally means you’re spinning that vintage engine pretty good just to keep up with traffic. One solution is to change the rear gear to a taller (lower numerically) gear so you can cruise at higher speeds and lower engine rpm. That’s fine, but then you sacrifice that all-satisfying low-end performance. Launching the car in First gear is no longer the exhilarating experience directly associated with Corvette performance.

The real solution is an additional overdrive gear in the transmission, and happily American Powertrain in Cookeville, Tennessee, has the perfect solution for Corvettes in the form of their 1968-76 C3 Corvette 5-Speed Kit (PN PFGM-20007). It should be mentioned they manufacture similar kits for C1 and C2 Corvettes. American Powertrain takes a brand-new TREMEC five-speed transmission and modifies the rear housing to locate the shifter exactly through the original C3 shifter opening in the console. Gone are the days of an old Hurst shifter coming out the side of the tranny tunnel and rubbing your leg; this package fits. But the cool features don’t stop there. American Powertrain also has a shift handle that looks like a factory Corvette piece, so the interior of the car retains that factory original appearance. They also include a new console shift pattern plate to show the new five-speed pattern. Since we were converting our automatic transmission C3 to a manual shift we also turned to American Powertrain for the clutch assembly and pedal assembly.

Speaking of factory appearance, our 1971 (C3) had been “resting” for almost 30 years so the interior appointments were, shall we say, “stale.” But just a small bit of time with the Corvette America catalog solved all our ageing console problems. So now, not only do we have a brand-new five-speed transmission to deliver new-car performance, we have the interior pieces to make the car look new as well.

We stopped by the American Powertrain headquarters and followed along as they modified the brand-new TREMEC five-speed specifically for the C3 Corvette (they can adapt this transmission to other year Corvettes, too). The conversion is interesting with some unique machine work done on the tailshaft housing (this housing is referred to as the “extension housing” in TREMEC manuals) to locate the shifter in the proper location.

After the American Powertrain five-speed arrived at Hot Rods by Dean their team of experts had it installed in no time. What made it so simple was the complete American Powertrain kit. The boxes arrived at Hot Rods by Dean complete with the modified transmission; a new, proper length driveshaft; powdercoated transmission mounting bracket; transmission mount; pilot bearing; backup light wiring harness; speedometer conversion (mechanical or electronic) and the aforementioned console shift pattern plate. We also ordered the optional Corvette-style shift handle.

With the new five-speed installed we have a Corvette that launches hard and still cruises at highway speeds with ease. It truly is the best of both worlds; with one hand on the vintage-style shifter, mixing the modern gears below, ya gotta love it.

1. Few things will add more fun, performance and reliability than adding a new American Powertrain five-speed transmission to your Corvette. Let’s take a look at the modification process that makes this TREMEC a direct fit in the C3 Corvette.

2. American Powertrain uses only brand-new TREMEC transmissions, no rebuilt units here. This is our brand-new TREMEC prior to modification. The rear tailshaft housing will be removed and replaced with a modified unit.

3. Starting with a new rear tailshaft housing, the machinist at American Powertrain removes the unused mounts on the bottom of the housing. Note the housing is held in place with a special mounting fixture.

4. The milling machine continues the removal of aluminum, providing the required clearance for mounting this transmission in the C2/C3 frame.

5. When the machine work is complete, every trace of the unwanted mounts has disappeared. This attention to detail is apparent throughout the modification.

6. The next step is machining a recess in the top of the housing. This recess will accommodate the new shift linkage, enabling the shifter to come up exactly in the stock Corvette location.

7. The shifter adapters are also machined in house; only one adapter is used for each conversion.

8. Over on the CNC milling machine, these housing are formed to fit the new recess machined into the tailshaft housing.

9. Here are all of the machined pieces that convert a brand-new TREMEC five-speed to a custom-fit C3 Corvette transmission.

10. The first step is to remove the rear tailshaft housing from the TREMEC five-speed tranny.

11. After removing the two top covers the shift rods are exposed. These must be disconnected before removing the tailshaft housing. The roll pins are driven out of the collars to disconnect the rods.

12. With the rods disconnected, attention is turned to unbolting the tailshaft from the main transmission housing. An impact wrench makes quick work of the process.

13. After removing the tailshaft housing, the output shaft is exposed. The three rods protruding from the top of the main transmission case are the shift rods.

14. The two cases are sealed from the TREMEC factory with a red sealant. All of this old sealant is carefully scraped off with a razor blade.

15. Our new, modified tailshaft housing will require a bearing race in the receiver below the mainshaft opening.

16. A coating of grease in the receiver helps the race slide as it is tapped into place.

17. The fifth gear drive assembly has a bearing that will ride in the new bearing race we just installed in the tailshaft housing. A coating of bearing grease is applied prior to final assembly.

18. A bead of sealant is applied to the main transmission case to provide a perfect seal between the main housing the tailshaft.

19. The bead of sealant is flattened with a finger to ensure uniform coverage between the mating surfaces.

21. With a little wiggling, the housing lines up and slides into place against the main transmission housing.

22. Notice the tailshaft housing slides up against the main case, the bolts are not used to pull it into place. Once the two housing are mated, the bolts are threaded in place.

23. After applying a bit of antiseize on the threads, the tailshaft to main housing bolts are torqued to 50 ft-lb.

24. With the two housings joined together, the roll pins are tapped into place on the shift rods.

25. Here we can see the machined housing and shift relocation pieces manufactured by American Powertrain installed in the tailshaft housing.

26. The two original covers are now installed atop the TREMEC tranny using the factory gaskets.

27. The modified rear housing requires a new cover to facilitate the relocated shifter. This is custom machined by American Powertrain.

29. The neutral safety switch is located on the rear of the tailshaft housing and comes with weatherproof wiring connections in place. The new driveshaft that came in the conversion kit will slip into place here, too.

30. OK, so you get a great five-speed overdrive transmission built with custom-machined parts to locate the shifter exactly in the factory opening, but when you’re in the driver’s seat this Corvette-style shifter simply completes the perfect conversion.

31. Since we were converting our Corvette from an automatic to five-speed we ordered a new console, shifter boots, shift plate and decal from Corvette America.

32. And here it is, our brand-new custom TREMEC five-speed transmission ready to be installed in our C3 Corvette. Add a 2-year warranty and technical support from American Powertrain to complete the package.

33. And this is what it looks like when it arrived at Hot Rods by Dean’s door, packaged like it just rolled out of the factory and ready for installation.