Swapping out a Turbo 400 for a Gearstar 700-R4 Transmission 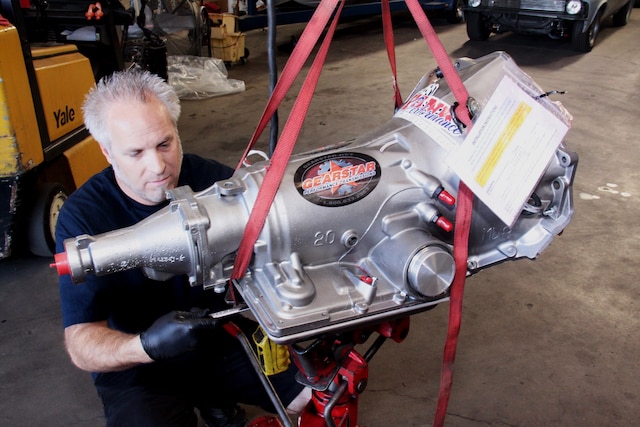 It was a matter of necessity the GM Turbo-Hydramatic 700-R4 transmission ever happened at all. GM’s powertrain engineers were handed a challenge amid higher fuel prices and tougher government standards to improve fuel consumption with an old-time proven concept called overdrive. GM took the Turbo 350’s proven internals and adapted them to a new package known as the 700-R4 overdrive automatic.

When the 700-R4 was introduced in 1982, it had minor performance issues GM engineers had to work through. Just five years later, the 700-R4 had undergone several engineering refinements and gained a more favorable reputation with enthusiasts. By 1990, the 700-R4 became a popular swap for the classic Turbo 350. That same year, the 700-R4 became known as the 4L60, the same transmission, but with a new designation. In 1993, the 4L60 became electronically controlled and known as the 4L60E. Even though the 700-R4 transmission isn’t being manufactured by GM anymore, it remains one of the best transmissions around.

Chevrolet’s Turbo 400 transmission is a time-proven rugged performer. It can take the power. However, it is not an efficient automatic transmission for cruising. We’re going to replace it with a fuel-efficient Gearstar 700-R4.

Zack Farah founded Gearstar Performance Transmissions to professionally serve hard-core enthusiasts. His goal, based on decades of experience in the mass-production transmission rebuilding industry, was to be the best custom automatic transmission shop in the industry.

“Gearstar is a custom transmission shop, one transmission, one builder, start to finish,” Zack comments. “We custom manufacture each transmission to the exact application, meaning how the car is going to be driven, specifications, horsepower and torque, vehicle weight, rear axle ratio, and rear tire size.” He adds, “We calibrate shift points and set redline parameters. We also set up the correct speedometer drive and driven gears so the speedometer is 100-percent accurate. We also build the transmission to have a firm, hard, or very hard shift, depending on the customer’s preference.”

Gearstar builds a wide variety of 700-R4 transmissions—five of them—ranging from 325 to 600 lb-ft of torque capacity. Because the 700-R4 can easily overheat, it gets Gearstar’s closest attention in terms of cooling and durability. Overheating is one of the greatest causes of transmission failure.

Zack adds, “This 700-R4 transmission build for Hot Rod Specialties includes the upgrade to a Smart-Tech Drum and input housing kit with the heavy-duty hardened input shaft. We can regulate line pressure under a high-torque load and you get increased clutch capacity.” Zack goes on to say, “Our 2.84:1 input carrier kit transforms the popular 4L60 series transmission from the factory ‘wide ratio’ 3.06/1.63 to a ‘close ratio’ 2.84/1.55 for game-changing acceleration on the track. This keeps performance engines in the optimal powerband while allowing a longer pull in First and Second gears, improving consistency, reliability, and performance.”

We took a classic ’67 Chevelle and swapped out a Turbo 400 for the late-model efficiency of a Gearstar 700-R4 overdrive automatic and were pleased at how easy this swap was. All it took was the same flexplate, a slight adjustment to the crossmember, and a mild TCI shifter detent replacement and we were back in the game.

Joel Rode at Hot Rod Specialties in Upland, California, performed this swap in a matter of hours and was driving the Chevelle the next day.

Removal of the Turbo 400 begins with removing bellhousing bolts and disconnecting the torque converter up front, shift linkage, and vacuum modulator. And finally, the transmission crossmember and driveshaft are removed, as shown.

The Turbo 400 is supported with a transmission jack for removal. Because the Gearstar 700-R4 has similar dimensions to the Turbo 400, it is easy to swap without extensive modifications. Gearstar and Summit Racing Equipment have provided virtually everything necessary to do this swap.

The Turbo 400’s imposing demeanor is reflective of its brute ruggedness. There’s a slight weight gain with the 700-R4, which tips the scales at 155 pounds versus the 400’s 134. However, both transmissions are roughly the same size with near matching crossmember alignment. The crossmember has to be moved slightly aft.

Here’s the Gearstar 700-R4 overdrive automatic on a sling ready to install. Summit Racing Equipment has provided everything else we need for this swap. Inland Empire Driveline Service is setting us up with a custom-made driveshaft to connect the transmission.

GM’s Turbo 400 (top) and Gearstar’s 700-R4 are positioned side-by-side. As you can see, both sport similar dimensions. The Turbo 400 is actually lighter by 21 pounds. What you gain in efficiency with the 700-R4 beats the 400’s weight advantage.

The 700-R4 looks to this throttle valve (TV) cable to modulate shift control and firmness. Instead of relying on intake manifold vacuum to control shift modulation, the 700-R4 goes on throttle position and output shaft speed.

When you install the throttle-valve (TV) cable, Joel suggests moving the cable all the way out and locking the adjustment in as shown. This approach makes the cable easier to connect at the throttle valve.

With the cable locked, it’s easier to connect this link to the throttle valve.

Joel took the liberty of removing the 168-tooth flexplate, which fits both the Turbo 400 and the 700-R4, to check the integrity of the rear main seal. If you’re going to fix a rear main seal leak, now is the time to do it. Joel will reinstall the flexplate using a thread locker and torque wrench. Flexplate bolt torque is 75-85 ft-lb in a crisscross fashion in one-third values using Permatex Threadlocker.

Gearstar has fitted our 700-R4 with a Yank Performance torque converter offering a 3,200-stall speed for crisp street/strip performance. This is a big-block Chevelle born for the commute, which is also ready for the weekend autocross or dragstrip.

Joel guides the 700-R4 into place. This Level 4 700-R4 transmission sports a whopping 600 lb-ft of torque capacity, which means Joel can build more power into the 454.

Joel gets the Yank Performance torque converter lined up with the flexplate for a quick bolt-up.

Torque converter-to-flexplate bolts get Permatex Threadlocker and 35 ft-lb of torque.

Joel uses a flywheel/flexplate holder to hold the flexplate for bolt tightening. This holder is a cheap investment and a time saver.

The Turbo 400’s crossmember location is within a short distance of the 700-R4’s location. You may have to drill the secondary holes in the chassis for a match-up.

The Chevelle’s speedometer cable is a quick spin-on connection, which makes it perfect for our mechanical speedometer.

The manual shifter cable from the Chevelle’s TCI shifter is connected and is good to go. Joel will have to change the shifter detent to accommodate the Gearstar 700-R4, which is an easy conversion.

The TCI Outlaw shifter from Summit Racing Equipment was originally set up for the Turbo 400. This TCI gate plate (PN 618014) enables us to convert the Outlaw shifter to the 700-R4 four-speed shift configuration.

Gearstar provides this torque converter lock-up kit, which operates off of intake manifold vacuum. This vacuum switch denies lock-up at wide-open throttle under hard acceleration and while on steep grades.

This illustration demonstrates the workings of the Gearstar converter clutch lock-up switch and related wiring. Tee off the intake manifold where you have constant vacuum. This switch is adjustable from 6 to 22 inches of manifold vacuum. Turn the screw clockwise to achieve a trigger point sooner as vacuum falls. Expect 6 inches of manifold vacuum as the trigger point with the screw turned completely in.

As you can see from this diagram, the torque converter will lock up only in Fourth gear. The vacuum switch is designed to prevent torque converter lock-up when the accelerator is mashed to the floor and when you’re going up a hill.

Joel measures for the custom driveshaft from Inland Empire Driveline Services. You will want to measure from the transmission extension housing seal to the bottom of the universal joint cap pockets at the pinion yoke. You’ll want vehicle weight on the rolling stock to get an accurate measurement.

The new, custom-made steel driveshaft from Inland Empire Driveline Services is a perfect fit and ready to handle the ZZ454’s torque.

What We Learned
When Joel took the Chevelle out for a road test, he was pleasantly surprised at the crisp performance of Gearstar’s 700-R4 Level 4 transmission. “The shifts are perfect,” Joel commented. “I drove the Chevelle home and have to say the 700-R4 is pretty badass. It shifts right on time with my shift light all by itself without manually shifting. All I have do is point and take a stab at it.”

Joel drag-tested the car with the 700-R4 and came up with a 12.43 e.t. at 107.8 mph. When he took the car to GTR High Performance for dyno testing, he broke the 12-bolt differential, which tells us plenty about the fierce durability of the Gearstar transmission. It survived the dragstrip and the punishment of a dyno session.

With the Turbo 400 transmission, Joel experienced 362.34 hp and 381.83 lb-ft of torque at the rollers. Although the 700-R4 consumed power, it stayed together with 344.24 hp and 372.49 lb-ft of torque at the wheels. That indicates a loss of around 18 hp and 9 lb-ft of torque. What does this mean for you in the real world? Success comes to those who finish the race, not those with hard luck stories and failed transmission tales to tell. The Gearstar 700-R4 gives you real efficiency on the street where you drive most and proven durability when it’s time to go racing. CHP