Thanks to Modern Driveline (MDL), a TKO five-speed upgrade for your 1955-’57 Chevy is a just a weekend away 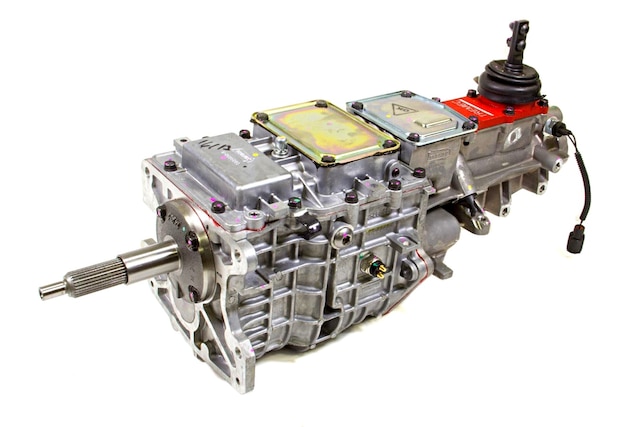 Behold the beloved and time-proven 1955-’57 Chevrolet in all their many forms. For some 60 years it has been the embodiment of Americana. In fact, we cannot imagine the American highway without them. If you own one then you understand the charm that goes with this most legendary generation of Chevrolets. And while we love the classic style, we feel the driveline can benefit from an infusion of 21st century technology.

If your Shoebox still has the original driveline or a perhaps a period-correct four-speed or Turbo-Hydramatic from the 1960s, you also understand the wear and tear that goes with an old straight-drive box along with the accompanying excessive fuel consumption. The 1:1 final drive ratio of those transmissions keep the rpm up and the mpg down, which is a bad combination. When fuel prices were under a buck a gallon and you could cruise all night for $3.00 who cared?

This isn’t 1963 anymore and fuel costs are somewhere around $2.50 to $4.00 a gallon across the land, depending upon where you live. Cruising isn’t cheap anymore and we’re all ears for fresh ideas on how to make it more affordable, and at the same time keep it fun. We’re seeking a quick way to get into both economic cruising and less wear and tear on our mill. Modern Driveline (MDL) has everything you’re going to need to install a TREMEC TKO five-speed in a vintage Chevy to keep the rpm’s down so you can cruise longer between fill-ups.

MDL enables you to move quickly on this conversion in a weekend because everything is available in one spot. We found the installation to be straightforward, void of unexpected obstacles and delays. No special modifications were required to the body or chassis and the TKO-600 slid right into place. We also opted for the MDL hydraulic clutch conversion kit, which is a logical upgrade for your TKO-600 retrofit because it offers light pedal effort and crisp function. It also avoids the challenges of hooking up a mechanical linkage. The car for this exercise was a sweet ’57 owned by Larry Ashley over at TMI. With a ProCharger supercharged 383 stroker under the hood, his wallet was getting killed at the gas pump. Besides, rowing your own gears is a good time waiting to happen.

TKO-600 Facts
TREMEC’s TKO series five-speed transmission family was originally launched in Ford’s 5.0L Mustang and has since been fitted into nearly every rear-wheel-drive performance application imaginable, including classic Chevys. Serving up a whopping 600 lb-ft of torque capacity along with confidence-inspiring slippery-smooth shifts and fuel-saving overdrive, the TKO-600 offers the ideal blend of brute strength and excellent street manners.

Based on the 3550 family of TREMEC five-speed transmissions, these guys upped the game in 2004 by offering a GM TKO-600 five-speed as the toughest five-speed to date. You get close gear ratios with a 2.87:1 First gear for those that have a 3.50:1 axle ratio or higher ratios, with two optional overdrives 0.82:1 (18%) or 0.64:1 (36%). TREMEC dubbed 0.82:1 OD the “road race” box for those that want hard acceleration in top gear. For optimal cruising and gas mileage we suggest the 0.64 ratio. These transmission are perfect for small- and big-block Chevy engines.

1. Here’s everything you need for the TKO-600 conversion all in one-stop, along with the technical support you may need to get the job done. The Modern Driveline/TREMEC TKO-600 can withstand 600 lb-ft of torque and comes with a 1. year warranty from the date of use. We’ve decided to complement the TKO-600 with a Modern Driveline hydraulic clutch conversion kit.

2. First up was installing the fresh pilot bushing included in the kit for the TKO install.

3. The pilot bushing or bearing can be driven in with an appropriately sized deep-well socket or a driver like this one, which drives the bushing in without damage.

4. The block separator plate has been installed and is temporarily held in place with a couple of bolts until we’re ready for the flywheel.

5. Blue threadlocker is used on the flywheel bolts prior to installation. Bruce Couture of Modern Driveline suggests never using threadlocker on the clutch pressure plate bolts.

6. Always use new fasteners with a new flywheel and clutch in the interest of safety and durability. The flywheel bolts have been snugged to ensure proper flywheel seating, then torqued in a star pattern to 85 ft-lb in one-third values.

7. Clean the flywheel contact surface with brake cleaner and a clean cloth void of any contaminants.

8. Our Modern Driveline Kevlar/Organic clutch disc is being properly centered with the provided clutch alignment tool. Make sure there are no traces of oil or grease on the contact surface, including skin oil from your hands. Modern Driveline builds all their clutches in-house to ensure superior driveability using Kevlar facings that last two-times longer than the average clutch, including situations from everyday driving to open tracking. Every clutch is 100 percent tested ensure proper release and performance.

9. Once the pressure plate bolts have been snugged around the perimeter, they are torqued in a crisscross fashion to 25 ft-lb in one-third values to ensure uniform pressure plate seating.

10. The Quick Time bellhousing is installed next, securing all of the bolts at the engine block. The Quick Time housing is SFI rated, which is a huge bonus in the highly unlikely event of a catastrophic failure.

11. The clutch diaphragm depth is checked here as shown to determine the release bearing depth adjustment.

13. The bellhousing to separator plate bolts are installed next and secured.

14. The TREMEC TKO-600 is raised into position and seated in the bellhousing. Because we used the clutch alignment tool, installation is easy.

15. The release slave hydraulic lines are routed through the clutch fork opening in the left-hand side of the Quick Time bellhousing. The bags are there to contain any leaks during the install.

16. Modern Driveline provides this TKO-specific crossmember, which the car’s owner had painted to match the rest of the ’57’s chassis.

17. Here’s the Modern Driveline crossmember bolted into place with the TKO transmission secure. As you can see, there’s plenty of room in the transmission tunnel.

18. AMSOIL Manual Synchromesh Transmission Fluid is pumped into the TKO-600 until it reaches the bottom of the filler port, about 2.75 quarts.

19. Following Modern Driveline’s instructions closely, we’re measuring for a new Dynotech steel driveshaft. Modern Driveline has provided us with a driveshaft order sheet, which explains in great detail how to measure for a custom driveshaft. The vehicle must be positioned with the rear axle at drive height, meaning rear tires on the ground or supported so the rear is compressed to drive height.

20. Our Dynotech driveshaft has arrived and is a perfect fit. Lube the forward slip yoke with transmission fluid to prevent seal damage.

26. Modern Driveline suggests removing the clutch pedal helper spring because it will not be needed.

27. Here you can see how the Modern Driveline firewall plate is used to properly locate the clutch master through the firewall.

29. A hole for the shifter has already been cut in the transmission tunnel. The shifter handle is installed at this time along with the boot.

30. The TMI custom console is installed next along with the TMI boot. In all, we spent a full two days on the install. Modern Driveline offers a wide variety of five- and six-speed transmission conversion packages, including stock replacement bellhousings and performance shifters.