The Muncie Miracle: Getting to know Chevrolet’s most legendary four-speed transmission 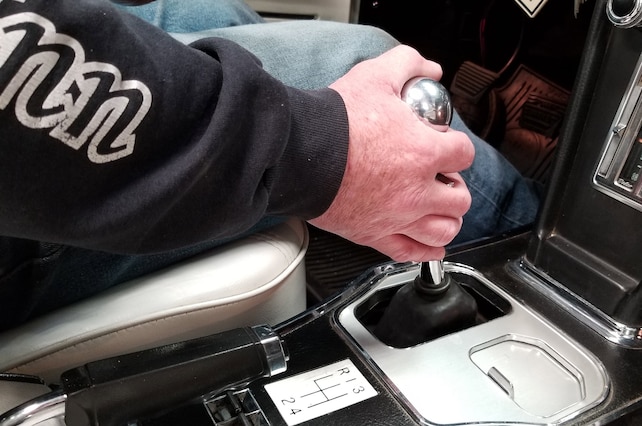 Few things excite like the sound and feel of an old-fashioned Chevrolet muscle car and that familiar whine of a classic Muncie four-speed transmission going through the gears. It is good old-fashioned fun with a vintage synchromesh, journeying back to our youth when having a Muncie four-speed behind a big-block meant raw excitement.

According to Paul Cangialosi, Muncie transmission historian, technician, and author of Muncie 4-Speed Transmissions: How to rebuild and modify, the Muncie four-speed transmission has its roots back to 1935 and the U.S. patent number 3,088,336 along with an engineer named James W. Fodrea. This patent number, according to Cangialosi, can be found cast into most Muncie four-speed main cases. Fodrea's legacy is far-reaching, extending into popular transmissions around to this day, yet most have no idea who he was.

That the Muncie has much in common with the T-10 is no accident. It was a matter of economics when Chevrolet needed a four-speed manual transmission for the Corvette in the mid-1950s. According to Cangialosi, GM took the basic T-10 design and beefed it up to conceive the Muncie M20 and M21 four-speed transmissions, which arrived in 1963.

GM's goal with the Muncie four-speed was to produce a better shift employing larger synchro cones. He tells us both the M20 wide-ratio and M21 close-ratio transmissions were first offered in 1963. The M22 Rock Crusher would come later to accommodate the heavy twist of Chevrolet's big-blocks in the mid-1960s.

Because the Muncie has so much in common with the T-10 and even similar Saginaw boxes, it is easy to get this guy mixed up with non-Muncie units. Although the Muncie's bloodline goes way back, this legendary gearbox entered service for the Chevrolet Division in 1963. In fact, 1963 is a standalone year because changes in this box came almost immediately for 1964, beginning with the front bearing retainer, which was aluminum for 1963 and became cast-iron in 1964. The bearing bore size was also one year only with a #6207-style input shaft bearing, according to Cangialosi.

The early production Muncie four-speed case is the small-bore unit and can be identified by the GM casting number 3831704 (see Muncie M20/M21/M22 Main Case Identification chart). The large-bore Muncie came into production in 1964-'65 and became the standard from then on through the end of production in 1974. What makes the small-bore and large-bore case Muncies different is the input shaft bearing size and first gear, which rode on the mainshaft void of a bushing for 1963. For 1964 and beyond, it rode on a bushing between it and the mainshaft.

Cangialosi explains there were two basic mainshafts produced for the M20, M21, and M22 transmissions (see Input Shaft Identification chart). From 1963-'70, the Muncie was fitted with a 27-spline mainshaft and must have the corresponding slip yoke. For 1971-'74, a larger diameter, 32-spline mainshaft was employed along with the corresponding yoke. Because this mainshaft is larger, you're also going to need larger bushings and seals. Keep this in mind when you're searching for a Muncie transmission.

What you will find in your search for the right Muncie four-speed is conflicting information from different sources. Before you here are the basics of Muncie M20, M21, and M22 four-speed transmissions. Glean the basics and use them in your research. Expect to find various combinations out there because these high-performance four-speed transmissions have been thrashed, trashed, and rebuilt through the decades. You're going to find various combinations of main cases, tailshaft housings, and side covers coupled with variations inside of each case. Pure dumb luck will lead you to a completely unmolested Muncie.

One more way to identify the Muncie is via stamped codes in the case, which indicate when the transmission was built at Muncie (see How To Read Muncie Build Date Codes chart). According to Cangialosi, the date was based on model year, not necessarily the calendar year.

Of course, restorers and rebuilders will tend to re-stamp the date code to suit a particular restoration. This can add confusion to what you've found. Muncie transmissions also tend to get performance improvements such as a gear ratio change and stronger internal parts. This is when you have to remove the side cover to see what's inside. Examine the input and output shafts to see if you've found the box you want.

And finally, if forced to choose between a Muncie or the BorgWarner T-10, it is suggested you choose the Muncie due to its brute strength. The Muncie was originally a stronger alternative to the T-10 and Super T-10 because it could take the torque. If you find an M22, you have the ultimate Muncie designed for the high torque of a big-block that will bolt to your small-block.

1. The classic Muncie four-speed transmission in all its many forms generally looks like this (this one provided by Anaheim Gear), though applications will vary in appearance. Cases are either small-bearing (1963) or large-bearing (1964-'74). The cases offer a broad range of interchangeability. Muncie transmissions from 1971-'74 have the larger 32-spline output shaft.

2. The main case will sport a seven-digit casting number (found above the US Patent No), which is not a GM part number. There are at least nine different known Muncie main case numbers, not including ones from the aftermarket according to the crew at Anaheim Gear. Author and technician Paul Cangialosi tells us the original U.S. patent for the Muncie four-speed was filed on November 29, 1957, and approved May 7, 1963. Main cases manufactured prior to May 7, 1963, will say Patent Pending. Anything after that time period will say US Patent No 3088336.

3. The Muncie four-speed, like the T-10, is a side-loading transmission. Remove the side cover and forks for a look at the geartrain. Removal of the front bearing cover is where disassembly begins. This frees up the geartrain.

4. The guys at Anaheim Gear tell us there are seven total Muncie input shaft options. Shown here is the M20 10-spline wide-ratio input shaft and counter gear. There is also a fine-tooth 26-spline input shaft employed from 1971-'74.

9. Here's another view of the M22's input shaft and countershaft. The 26-spline input shaft yields greater torque capacity via the number of teeth and greater surface area.

12. On the left is the M20 countershaft, which is easily identified by the larger 29-tooth gear. On the right is the M22 countershaft with 27-teeth. When you have the two side-by-side it becomes obvious which is which.

13. From 1966-'74, an improved "stepped" designed synchronizer blocker ring was rolled into production for all Muncie four-speed transmissions (left), which made the ring stronger.

14. This is an M21 with 10-spline input shaft and cast-iron bearing retainer. Note the single groove, meaning an M21 close-ratio.

15. Tailshaft housings will vary based on original application. There were a total of six types. You can use a variety of stock and aftermarket shifters on any of the Muncie tailshaft housings. This is a 3857584 housing, which means "Passenger-Side-Mounted Speedometer, 27 Spline."

16. There are six known Muncie side covers. Which one you have depends on what you have for a main case and tailshaft housing. Two are early style side covers. Four are late model.

18. If you have a 1963 Muncie that needs an input shaft bearing retainer, all is not lost if you can't find the 1963 aluminum bearing retainer. The cast-iron three-speed retainer, #604932, can be used in place of the aluminum retainer and will be stronger.

19. You don't have to search the classifieds or a junk pile to find a suitable bellhousing for your Muncie M20, M21, or M22. Summit Racing Equipment inventories all kinds of cast-aluminum and steel bellhousings for the Muncie. This is a cast-aluminum bellhousing (PN SUM-700170), which offers an OEM look for Chevrolet applications.

20. Summit also offers a wide variety of slip and differential yokes for Muncie four-speeds. Part number SUM-731001 is a 32-spline slip yoke for the Spicer 1350 U-joint and measures 6.250-inches long.

21. Looking for a Muncie shifter engineered to fit within your budget? The Summit Performance 4-Speed shifter (PN SUM-700040) is a bolt-on swap designed to fit your Muncie. Good, solid, rugged construction makes it a terrific drop-in for around $100.

Photography by the Author and Summit Racing Equipment

ATI Performance Products shows you how to determine the stall speed needed and torque converter selection for your Chevy.