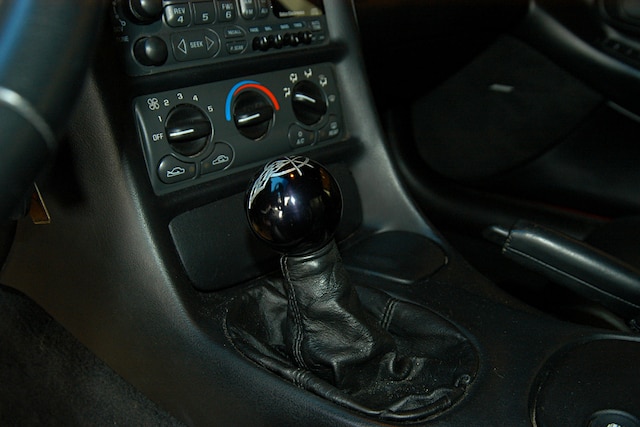 Q: Greetings to everyone at the magazine. I have enjoyed the how-to articles for several years now. I own a 1998 Corvette with a manual transmission and I like to think of myself as a weekend mechanic. I have recently noticed a rattling sound from the shifter in First or Second gear under acceleration. It also seems like my whole shifter has a lot of movement in it, like something is not tight. Do you think my shifter is just worn out? I hope you can guide me as to what to look for.
Thanks,
Shelby

Some of the symptoms can include excessive or sloppy shift lever movement and difficulty when trying to upshift or downshift. You could also experience vibrations and rattling coming from your transmission tunnel or at the shift knob.

The only way to get the shifter bushings from Chevrolet is to purchase the entire shifter box assembly. However, there are several companies—such as Zip Corvette—selling replacement shifter bushings, available for around $30.

Replacing worn shifter bushings and performing the shifter adjustment is a very simple job that can be accomplished in a couple of hours with minimal tools. This should solve your shifter problem and give you a positive feel to the shifter again.

The first step is to gain access to the shifter, this is done by removing the center console panels so you can access the shifter box.

Remove the panel that houses the traction control button by prying the assembly out, taking care not to gouge the surrounding console face.

The console compartment comes out next by removing four nuts. Two of the nuts are visible once the traction control panel has been removed. The other nuts are under the oval-shaped covers on each rear corner of the console. The covers pop off with a small screwdriver to expose the nuts. The auxiliary 12-volt power port requires the connector to be unplugged before the compartment can be completely removed.

Once the compartment is out of the way, pop off the air conditioning sensor with a small screwdriver and remove the hidden screw under the sensor. This will allow the center console upper-fascia to be detached.

To take out the center fascia, the torx-head screws under the ashtray/cigarette lighter door must be removed.

Once these screws are removed, the fascia plate is simply held in place by push-in retainers that allow the plate to be pulled away from the dash. Be sure to disconnect the cigarette lighter pigtail at this point.

The shift knob is the next thing we will need to remove. The factory shifter knob has a top cap that simply pops off. The knob itself is held in place by a wedge that fits tightly into the shifter handle. Gently pry the wedge out. Then the knob can be unscrewed counterclockwise. Remove the 10mm nuts to detach the shifter boot.

How to Remove and Adjust the Shifter and Shifter Box

Put the transmission in Neutral with the emergency brake on before removing the shifter.

Blow away any debris or contaminants that may have accumulated.

Remove the rod from the box so it can be cleaned. When installing the rod back into the shifter box it should be lubed with a good high-heat lubricant. If there is excessive up and down play where the shifter rod passes through the shifter box, the shifter box rod bushings may need to be replaced. This is not a common failure.

Then tighten the three Torx bolts on the torque tube to 22 ft-lb. You must torque the two mounting bolts first and then the pinch bolt. Then, pull up the positioning pin at the front of the shifter and there you have it. The shifter should be adjusted.

Shelby, at this point you may want to temporarily re-install the shifter knob and the traction control switch and road test the vehicle before you reinstall any of the panels. Let me know how this repair works out for you.