Repairing the Clutch in a Long-Neglected 1995 C4

Putting Your Foot Down … on the Clutch 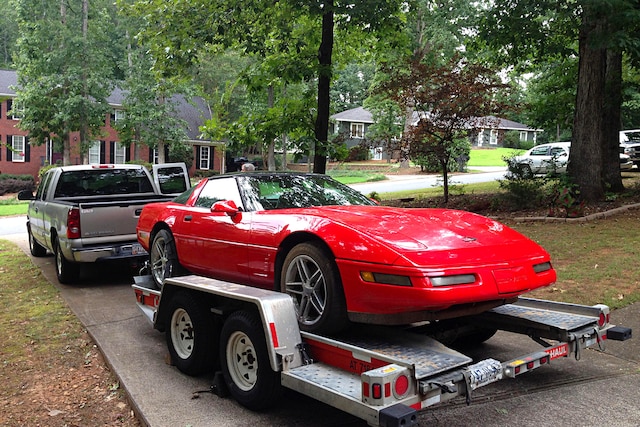 Meet Baby Red, a six-speed ’95 Corvette coupe that sat without running for about three years and which we purchased for $3,000. There are deals like this to be had, but it’s only a deal if you can do the work yourself. If not, it’s cheaper to buy a car that drives.

In this case, the obvious mechanical problems are that the car didn’t run, the brakes were rusted well beyond salvage and the clutch would not disengage. Here, we’ll cover replacing the hydraulic components of the clutch, which consists of the master cylinder mounted to the firewall and the slave cylinder that bolts to the transmission bellhousing. We could have just replaced the master cylinder, which was so frozen in place the clutch pedal could not even be depressed, but the slave cylinder is every bit as old and is likely to fail soon so we ordered each component from Summit Racing and the local O’Reilly Auto Parts store, respectively. As the phrase goes, “OHIO—Only Handle It Once.”

The step-by-step is in the photos, but there are a couple other things we’d like to pass along: both components are held in place with 13mm fasteners and have hydraulic lines that need to be removed with a 14mm flare wrench. They are also both torqued into place: 25 ft-lb for master and 19 ft-lb for the slave cylinder (these specs are for the six-speed only; torque values for earlier cars are different). You should also be warned that it takes a fair amount of force to get the slave cylinder back into place because the actuator rod has to be compressed against the clutch fork. The easy way is to use a short pry bar to hold it forward long enough to line it up on the mounting studs and get the two nuts started.

Once everything is bolted in place, the system must be bled, which is a royal pain, especially underneath a car with the amazing selection of spider webs and egg sacs that came with this one. You’re also going to be dealing with brake fluid, which is highly flammable and can destroy your paint. It’s also not great for your health, and eye protection is required when working with it. DOT 3 brake fluid is required for the clutch system and we used Wilwood’s Hi-Temp 570 Racing Brake Fluid, which is our fluid of choice. Since brake fluid is hygroscopic (it draws moisture from the air), only use fluid from a new, sealed container.

For those of us who often work alone, a vacuum pump is an invaluable tool that makes it possible to bleed hydraulic systems like this one (or brakes) without having someone else available to pump the pedal. All the other rules apply such as not letting the reservoir get too low, but it can make bleeding a one-man job. We learned a number of valuable lessons from trying to bleed the slave cylinder with a vacuum pump. The first is that using a pump in close quarters where the reservoir cannot be held vertically (or connecting the hose to the incorrect nipple on the reservoir) will result in sucking brake fluid through the pump itself and a spectacular spray of fluid being blown through the face of the pressure gauge, followed by an impromptu lesson in how to field strip a vacuum pump so you can clean it out before the fluid eats the seals. The correct orientation of the nipples on the reservoir (determined by which side the down tube is on) is shown in the photos. The other issue is while the pump system may come with fairly large diameter tubing to affix to the nipple on the bleed screw, you may want to replace it with smaller diameter tubing that will seal better (especially on aftermarket cylinders that, like this one, have a nipple smaller than the factory one). With the better seal, it’s also easier to tell when you’ve got all the air out of whatever you’re bleeding. After starting with the pump, we used 1/8-inch ID rubber fuel line and hit it with a heat gun just long enough for it to expand around the nipple but still seal tightly. Vette

1. The first order of business is to remove the side panel and disconnect the battery. It’ll come out as well, but that can wait until more stuff is out of the way.

2. Remove the two bolts that hold the ECU in place on its bracket and gingerly move it to one side where it will be out of the way.

3. With the ECU out of harm’s way, the bracket remains. Two things hold it in place: a tapered rod-like mount onto which it slides and a bolt located near the hood latch.

4. This is the bolt that holds the ECU bracket in place. Once it’s removed, the bracket can gingerly slide forward off its mounting. This is the end of the easy part.

5. The next step takes us under the dash, where the hush panel has to come out. Removal starts with the two 7mm bolts that hold it in place from underneath.

6. Unlike the lower screws, the side screws are Torx bolts like the trim panel above. There is so little room that getting a driver in place may not be possible. We used the old standby of a wrench on the bit to remove the one closest to the door hinge.

7. With that, the panel can be gently lowered into the floorboard, exposing the courtesy light and OBD port, which are still attached to the hush panel.

8. While the courtesy light can be unplugged, the OBD port needs to be unscrewed from its bracket in order to free the hush panel so it can be removed from the floorboard to make room for you.

9. The clutch actuator rod fits on a stud on the side of the clutch pedal and is held in place with this spring steel clip, which served the same purpose from 1963-2004. A narrow screwdriver will let you pry the locking tab up high enough to slide the clip off and free the round end of the actuator rod from the clutch pedal. You’ll be working in very close quarters, and the only way to see what you’re doing is to lay upside down on the floorboard with your head under the dash. Removing the seat will make this easier.

10. With the underdash side of things done, it’s time to move back under the hood. If you haven’t figured it out yet, one of the real problems is getting access to the clutch master cylinder reservoir, which is so packed in there some owners can’t even find it.

12. There’s a spacer that goes between the master and the firewall and you will want to replace it. In our case, the gasket was destroyed and the spacer so stuck in place there was no serious thought of reusing it, so we ordered a new one from Corvette Central.

13. Any time you open a hydraulic system you’re going to have to bleed it afterward in order for it to function correctly. We got a start on it by bench bleeding the master cylinder in a vise prior to installing it in the car. Fill the reservoir with fluid, put something underneath the outlet to catch the fluid and push the actuator rod in until the fluid flows out of the outlet.

14. The master and the slave cylinders are both about the same age, so if one is giving you trouble the other isn’t far behind. This is the slave cylinder as seen from directly beneath, mounted to the rear of the transmission bellhousing; note the rubber cap on the bleed screw, which will have to be removed for bleeding. Like the master, the slave cylinder it’s held in place with 13mm bolts and the hydraulic line uses a 14mm flare wrench.

15. We ordered a new one from the local O’Reilly. Prior to installation, the rod is inserted into the rubber boot, round end first. The boot fits snugly into place on the step near the tapered end, which must be seated in a depression in the clutch fork during assembly. The clutch fork and depression are visible with the slave cylinder removed.

16. The most vexing part is bleeding the system, which must be done prior to installing the slave cylinder. First, find all the slack you can in the hydraulic line going to the slave cylinder, which needs to be at a 45-degree angle with the screw pointed upward, then bleed.

17. We used a vacuum pump to start the bleeding process. Pump the handle to build up pressure and then crack the bleed screw just like you would with someone pumping the pedal. Be sure the down tube inside the fluid reservoir is on the side that goes to the bleed screw, and not the pump.

18. We finished bleeding with the usual method of having one person pump the pedal then hold it down while the bleeder screw is opened since it let us use a smaller tube that sealed better on the nipple. Repeat until no bubbles appear, replace the rubber cap on the bleed screw, and torque the slave cylinder in place.