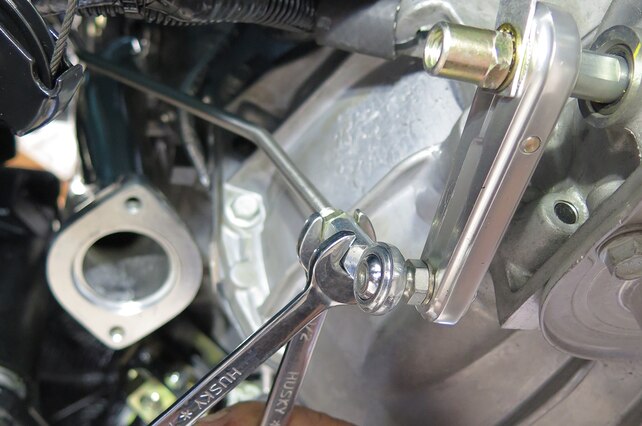 So, you’ve installed a later-model automatic transmission in your early Chevy and are wondering to yourself, “What’s the easiest way to hook up the shift linkage?” If it was an auto-shift model to begin, that pile of antiquated Powerglide rods and bushings left over from the swap won’t do you much good—nor would any of the remaining manual trans linkage.

Regardless of whether you’re reconnecting with a stock (automatic) or aftermarket steering column, the solution is fairly simple: a GM shift linkage kit from Classic Performance Products (CPP). (If you’re dealing with a manual-shift column, you’ll need to reconfigure the column accordingly, making sure to establish a functioning detent.) The Heim-jointed stainless setup with aluminum trans gear selector lever was designed to be universal, so with minimal modifications your transmission shift linkage situation is easily solvable.

We recently installed a new tilt steering column and a 700-R4 overdrive in a 1955 Bel Air, so to prove just how easy the situation solver is, we got our act in gear, so to speak, and went ahead and installed CPP’s GM shift linkage kit.

01. Whether it’s a factory automatic column (left) or an aftermarket tilt, making the “connection” to a freshly swapped later-model auto transmission shouldn’t be a problem—it should be a breeze …

02. …with CPP’s GM shift linkage kit. Comprised of a Heim-linked stainless connector rod with an aluminum transmission shifter arm, the kit is designed to be tailored to most any situation you can throw at it.

03. CPP’s Classic Fit tilt column, to which we’re about to install the linkage kit on, comes standard with a flat shift lever as well as a doglegged version—both offering multi-position mounting options. Also shown is CPP’s “adjustable” shift lever (bottom), which cannot only be clocked in various positions, but its serrated/slotted arm allows for more linkage adjustment as well.

04. Position the shift lever on the column so as not to over-rotate and/or bind the linkage. Park should land roughly in the 10-11 o’clock position. Secure with just a few screws for the installation process in case you need to re-clock the lever.

05-06. Rotate the transmission selector shaft clockwise till it’s in Park. Remove any existing linkage parts from the shaft; it will either be 10mm metric or 3/8-16 standard thread (both thread type hardware is included in kit).

07. The splined bushing slides over the shaft first (open-end facing out, slotted hole engaging on flat spots of shaft), then the shifter arm goes in place, secured with the appropriate-thread nut. Start out by clocking the arm in the 8-9 o’clock position.

08-09. Assemble the upper Heim joint portion and loosely install onto the column shift lever. Note the adjustable hex connector has been marked—this is to reference the depth of the connector rod.

10. Loosely install the Heim link onto the transmission lever; thread the connector rod completely into the female Heim.

11. In an attempt to keep the connector perpendicular to the end links (an angle connection could be made, but travel would be affected), we’ll need to put a couple of doglegs in the rod.

12. The “gap” was measured horizontally between the two rod ends, and then transferred vertically onto the arm for tweaking.

15. Bent as such: upper and lower straight sections parallel with an approximately 3-inch kick in the center.

16. Now that we’ve achieved plane adjustment sufficiently, we just need to trim the length accordingly. When doing so, make sure both shift levers are in the Park position.

17. Run the column shifter through all the gears with the rod mocked in place, ensuring full, unrestricted travel as well as full engagement into Park.

18. Trimmed with a cutoff wheel, the upper end of the rod is then marked and dimpled with a drill for the hex connector set screws.

19. Once the rod is bent, trimmed, and drilled, it’s installed into the hex connector and locked down with the Allen set screws; the jam nuts are secured as well.

20. When you’re satisfied with shifter arm adjustment, lock down the transmission end Heim joint to the gear selector arm as well as the Heim’s jam nut.