How to Fit a 4L85E Transmission Into an Early 1967 Chevelle

Overdriven: Fitting a 4L85E Under an Early Chevelle is Easier Than You Think 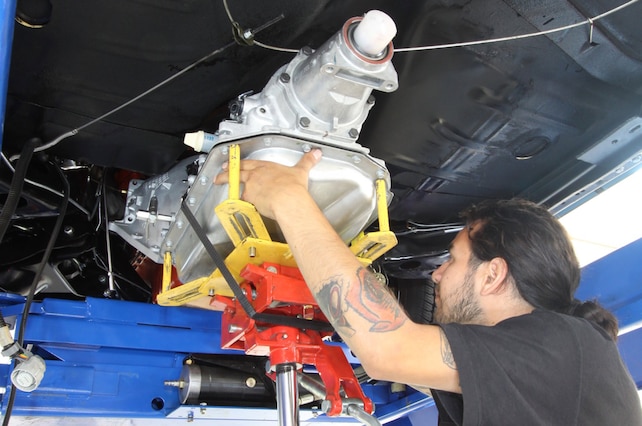 Chevrolet transmissions have evolved quite a bit from the two-speed Powerglides of the 1960s to today’s eight-speed marvels of engineering. And, in the same way hot rodders like to upgrade to modern engines, there’s a lot to be said for upgrading to new-school transmissions as well. The most common, mechanically controlled transmissions found under classic Chevys are the three-speed Turbo Hydromatics. Typically, TH350s found their way behind small-blocks and TH400s backed up big-blocks. Back when you could fill your gas tank for $10 they were great. But eventually, overdrives appeared and these simple, and effective, transmissions evolved.

Thanks to the overdrive gear you didn’t have to lose off-the-line performance, by swapping out rear gears, to get somewhat better gas mileage. By adding a fourth, Overdrive, gear (typically with a ratio of 0.75), you can keep the snappy gearing and still drop the gas-guzzling rpm on the highway. For a long time, the 700-R4 was the top-dog for hot rodders wanting overdrive. But, as time marched on, it became increasingly easy to go with GMs newest innovation, the electronically controlled overdrive transmission.

Yep, in the same way computers changed how we run our engines, they also made transmissions better than ever. One of the first transmissions to gain swap popularity was the 4L60E. A direct descendent of the 700-R4, the 4L60E hit the streets in the mid-’90s. In case you’re curious, the 4L60E gets its name from the four-speeds, longitudinally positioned, 6,000-pound GVW, and the fact that it’s electronically controlled. It weighs in dry at 155 pounds, and is perfect behind the typical hot-rodded small-block.

For big-block cars you have two choices. You can have a 4L60E modified to accept more power or move up to Chevrolet’s 4L80E line of transmissions, which began production in 1991. Unlike the 4L60E, which started out as the non-electronic 4L60, the 4L80E was designed from the start to be computer controlled. It’s also heavily based on all the things that made the TH400 such a badass transmission in terms of strength. It’s, in essence, a TH400 with overdrive, a lockup torque converter, and advanced electronic controls.

These units found their way into heavy-duty GM trucks and vans, but they’re also perfect for a classic Chevy with a big-block. The fact that it’s based on the TH400 transmission is a very good thing. After all, the TH400 was so popular, and strong, that they endured long after all the other old-school automatics were discontinued. Many parts were carried over into the 4L80E, including the 32-spline output shaft. In 2002, GM upped their game with the introduction of the 4L85E. It has the same basic dimensions as the 4L80E, but upgraded with tidbits like a five-pinion reaction gearset and a five-pinion output gearset.

On paper, the 4L85E was rated up to 460 lb-ft (compared to 440 lb-ft for the 4L80E), but it can typically handle quite a bit more. Of course, all of the extra strength of the 4L80E comes with a weight penalty of over 100 pounds compared to the 4L60E, but if you have a big-block then you most likely don’t care about a few extra pounds. They are the strongest GM overdrive transmissions ever produced. They can be upgraded for extreme power even though they lack any real problem areas for most street engines. Even in stock form they are perfect for most hot-rodded Chevys.

What we were dealing with this time around was a 1967 Chevelle with a 396 big-block and a TH400 transmission. It was fun off the line, but miserable on the highway and painful at the gas station. At first we considered a 4L60E, but believe it or not, it’s actually harder to fit one within the trans tunnel (due to solenoid placement) than a heavier 4L80E or 4L85E. Given that, we decided to go with the easier to fit and stronger 4L85E from Chevrolet Performance Parts. This will give us a transmission that will live a long time behind our big-block and give us all the benefits of 21st century transmission technology.

1. First up was removing the old TH400 transmission. A long extension made getting to the upper bellhousing bolts much easier. It’s pretty heavy with the torque converter in place, so having a buddy and a transmission jack helps makes things much easier.

2. We then swapped the flexplate over to one compatible with our new Chevrolet Performance 4L85E transmission. In this case it was a 168-tooth, SFI-certified, TCI Auto piece we had left over from another project, but GM versions (PN 19260102) are readily available.

3. The trans tunnel on our 1967 Chevelle didn’t seem very roomy, but, in fact, there’s more room than there appears, especially as you near the engine.

5. And here’s the 4L85E next to our TH400. As you can see, it looks a lot bigger, but most of the extra mass is in the length and the size of the pan, neither of which hampers fitting one under our Chevelle. In case you’re curious, the 4L85E is 26.25 inches long. We have found this transmission to be an easier fit than the “smaller” 4L60E series of transmissions.

6. For the transmission cooler lines, the unit ships with OEM-style quick-connect fittings. For our transplant we needed –6AN so we hit up the guys over at Sweet Performance Products in Placentia, California, for some of their adapter fittings made especially for the 4L85E (PN MO4GRWT44). As you can see, the rear fitting has tube extension on it that is critical to the cooling circuit of the transmission. Fluid flow and pressures are critical in modern overdrive transmissions, so even something as seemingly trivial as this extension is important to retain. In short, don’t just toss on any old fitting you happen to have around.

7. Running the –AN fittings can cause clearance issues with the trans tunnel. One logical solution might seem to be something like this. However, we’ve been warned by several transmission shops that this hard 90-degree turn can upset that critical fluid pressure/flow we mentioned earlier and cause trans problems down the road.

8. With the fittings in place we raised the 4L85E trans into the tunnel and marked where we would have clearance issues. It turned out that the only spot was the front fitting since there was plenty of space around the rear one.

9. Instead of just wailing on the floor with a hammer, we used a piece of heaving tubing. This gave our dent a rounded, more factory, look. This was the only place in the tunnel where we needed to add a bit of clearance.

10. Behind a mild big-block we could have run a stock GM torque converter. But, the big-block in the Chevelle we were working on had a pretty lumpy cam. Given this we decided to hit up the guys at Hughes Performance for one of their Street Master 2,500-rpm, 13-inch torque converters (PN 25A-25LHD). The higher stall rpm eliminates sluggish, slow starts and will help the big-block idle smoother when in gear.

11. After pouring in some fluid, we slid the Hughes converter onto the 4L85E’s input shaft.

12. We also decided to install the linkage for our 4L85E-compatible shifter now rather than after it was installed under the Chevelle. We didn’t want to ditch our column shift so we hit up Shiftworks for one of their connection kits (PN KK02). They even hooked us up with a sweet column lens indictor with the correct positions (P, R, N, OD, D, L2, L1) for our 4L85E.

13. It was then time to raise the 4L85E into its new home under the Chevelle. The trans weighed in at around 250 pounds dry and the converter added at least 60 pounds, so we were happy to have a sturdy tranny jack.

15. We most likely could have modified the existing crossmember, but we’ve had great luck with the ones sold by G Force. This boxed, black-powdercoated crossmember had integrated exhaust clearance cutouts, which we felt was a nice touch. For the trans mount we went with a polyurethane piece from Energy Suspension. We also installed the flexplate cover that came in our CPP Transmission Installation Kit (PN 19259119).

16. Our steel TH400 driveshaft was way too long, but having the stock driveshaft shortened isn’t the best way to go. A lightweight aluminum driveshaft is much easier on modern overdrive transmissions, so we hit up Inland Empire Driveline for one of their 3.5-inch aluminum spin sticks.

18. Our big-block has a carb, so we needed a way to get throttle position information to the computer. Enter the TCI remote TPS sender (PN 377400). It can work with two different brackets; one for Quadrajet, Carter, and Edelbrock, and one for Holley 4150, 4160, and 4010 carbs. Setting this up per the instructions is critical if you want your transmission to live a long and happy life.

19. Our application required TCI part number 376705 for our Holley carb – hooking it all up was cake. We also picked up a TV Cable Bracket Corrector (PN 376715), which attached to the throttle bracket on the Holley carb and gave us a place to attach the TPS cable.

20. The “E” in 4L85E stands for electronic and as such this transmission requires a computer to control it. For this we went with Chevrolet Performance Parts’ (CPP) automatic Trans Controller Unit (TCU) kit (PN 19212657). The kit included the controller, labeled harness, software, and USB cable. It’s weather resistant, but we chose to mount it under the passenger seat, since that seemed like the most out of sight location.

21. We’re not going to bore you with wiring. Let’s just say that all the connections on the CPP harness were clearly labeled and the instructions made it a nearly plug-and-play endeavor.

22. Under the Chevelle we simply plugged in the labeled connectors, such as input speed, output speed, and the main transmission harness. Once this was done we hooked up a laptop and worked through the setup menus per the instructions.