Clutch Performer - Installing a C6 ZR1 clutch for a stock feel and no slip in a high-horsepower Corvette. 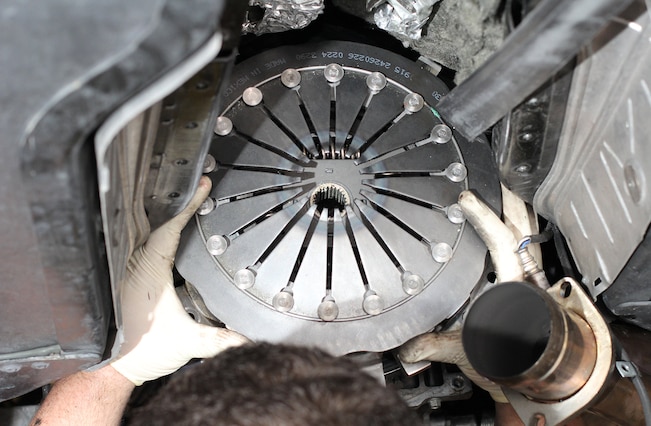 There are plenty of reasons to love the 2009-2013 Chevy Corvette ZR1. It’s an incredibly fast piece of machinery with some amazing technology. Even if you aren’t in the market for a supercar, you can still enjoy the fruits of the Corvette team’s labor. The clutch is perhaps the best place to start if you own a C6 Corvette or fifth-gen Camaro. Sure, there are plenty of great aftermarket clutches on the market, but few (if any) really feel like a stock clutch. And let’s face it; some of us aren’t quite as spry as we used to be. Increased pedal effort could be the difference between driving your pride and joy several times a week to collecting dust for several weeks at a time. But if you’ve put a blower or even a stout top-end on your LS2, LS3 or LS7, the stocker won’t last long.

If you want increased holding power without the leg workout, rattle, chatter or that on/off sensation, the only foolproof solution is to use Lingenfelter’s ZR1 Twin Disc Clutch Kit (PN L360020105). The folks at Lingenfelter Performance Engineering reverse-engineered the ZR1’s clutch for use on other platforms, starting with a billet steel flywheel that is made to OEM spec, but with the more common 6-bolt flange. Thankfully C6 Corvette owners only have to bolt up this flywheel, along with the OEM ZR1 twin disc pressure plate assembly, clutch discs and bolts as well as a ZR1 clutch slave cylinder. Camaro applications need an additional spacer for proper clutch engagement.

To ensure this 700-horsepower-capable ZR1 clutch conversion is as much a bolt-in affair as promised, we decided to install one in a modified 2008 Corvette Z06 that was a customer of AntiVenom in Seffner, Florida. In addition to the many projects you’ve seen on these pages, AntiVenom is quite the C5 and C6 specialist. At this point proprietor Greg Lovell has probably installed and test-driven every clutch on the market, including this one. And Greg gave it the thumbs up for an owner such as this one, who recently had hip surgery. He loved his modified Z06, all 584 rear-wheel horsepower of it, but the after the surgery the aftermarket clutch he was using became (literally) a sore point. The owner stopped driving the ’08 unless he absolutely had to. And that’s not right. Nothing else quite feels like a stock clutch, except another stock clutch, and this clutch swap put him back in the driver’s seat.

1. AntiVenom technician Kyle Miller kicks off our clutch install by removing the 2008 Corvette Z06’s center console to access the bolts that connect the shifter to the torque tube.

2. Kyle pops the hood to remove a few key parts to make room including the plug wires, spark plugs, and header bolts.

3. Stock intake manifolds can usually stay in place during a clutch swap, but the FAST LSXR adds a little bulk to the rear of the manifold that can make life difficult when reinstalling the bellhousing.

4. The headers are also unbolted from the X-pipe, the O2 sensors are unplugged and unclipped from the chassis (but left screwed into the headers). Eventually Kyle will remove the driver side header, but leave the passenger side in (though not bolted up) because the Z06’s dry sump oil lines are in the way and not worth disconnecting.

5. The rear O2 sensors are removed from the crossover pipe, as are the spring-loaded hangers. Once the clamps to the cat-back are loosened, Kyle can slide the pipes out and remove the X-pipe entirely.

6. The tunnel cover plays a crucial role in undercar aerodynamics, and even lends some rigidity to the chassis. It’s just a shame it requires so many bolts. Thankfully it is easily accessible with power tools.

7. Once Kyle unhooks the transmission lines, the torque tube is ready to come out.

8. Unfortunately there is quite a bit of work at the back of the car to remove the transaxle connected to the torque tube. Kyle starts with the lower ball joints and the tie rods, which require some muscle.

9. The lower shock bolts as well as the parking brake cables, brake line brackets, and ABS sensors are unhooked. Now the rear cradle is ready to be removed.

10. Using a trans jack to keep the transaxle supported, James leant Kyle a hand by unbolting the cradle. Since it is made of aluminum it is not terribly heavy, but Kyle makes it look easy – gripping the built-in handles where the transverse leaf springs would normally reside (this car has coilovers).

11. With the cradle out of the way, the catback exhaust system is quite a bit easier to remove. The hangers are easily accessible to unbolt (just below the license plate), but the over-axle pipes are a tight squeeze, especially on the passenger side.

12. AntiVenom unbolts the CV axles at the axle stub to preserve the axle seals.

13. The torque tube is unbolted from the bellhousing, slid out of the clutch, and lowered down.

14. With the bulk of the weight to the rear, the torque tube and transaxle stay balanced on the trans jack without issue.

15. Central to the LPE ZR1 Twin Disc Clutch Kit (PN L360020105) is the OEM pressure plate assembly and organic clutch discs, paired with LPE’s billet steel flywheel. Since the factory LS9 crankshaft and flywheel use 9 bolts to adjoin, the LPE flywheel is needed for use with the traditional 6-bolt LS applications. The LS9 and LSX crate engines are a couple oddball flywheels in the LS engine family (the LSA in the CTS-V and the ZL1 Camaro are also an oddball. They use an 8 bolt flywheel and that is where the LSX crate engines gets its 8 bolt pattern).

16. Here you can see one of the OEM organic clutch discs that helps keep this baby stay chatter-free, yet still hold over 700 horsepower. Not shown is the floater plate, which stays bolted to the pressure plate and is devoid of the familiar aftermarket rattle at idle.

17. To get started, the LPE flywheel is bolted up to the crank.

19. The bellhousing is a tight fit, but can be installed without lowering the engine.

20. Since all C6s use a single disc clutch aside from the ZR1, a new slave cylinder is required to account for the much different clearances (included in the kit).

21. Thankfully the LPE kit allows the OEM ZR1 slave to bolt right in with no spacers on the C6 for perfect clutch actuation. Normally we’d have to check the clearances and space accordingly with an aftermarket twin disc.

22. Kyle carefully slips the input shaft into the clutch, and maneuvers the torque tube in place to bolt up to the bellhousing. The rear cradle, tunnel cover, tranny lines, and exhaust are reinstalled (in reverse order) to button up the install.

23. Since this car does see some track time, the folks at Lingenfelter were intent on sending us their Clutch Pedal Return Kit (PN L360080197). This $80 piece will keep the clutch pedal from sticking to the floor on any C5 or C6 during high rpm shifting (a frequent and known issue).

24. Unlike the clutch, the installation is pretty simple and does not require a lift—just some contorting to get under the pedal. Once assembling the stainless spring, sound deadening sleeve and bracket, the spring hooks around an existing bracket in the footwell. The spring bracket then hooks around the pedal and is secured to it by the provided bolt and nut. The provided directions are very easy to follow. To date the spring has worked flawlessly on the 600+hp street beast, and the clutch feels—as promised—beautifully stock.