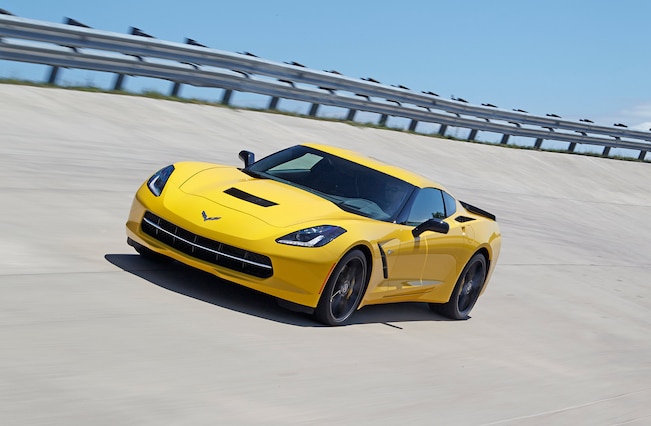 It seems the term “the more the merrier” is used quite often around GM these days. The 2014 C7 brought us the first Corvette seven-speed manual transmission, and GM just announced that they are plus-sizing the automatic as well. New for the ’15 Corvette is the 8L90 Hydra-Matic paddle-shifted eight-speed engineering wonder. Yep, that’s two more gears, and that equals a whole lot more fun.

There are many interesting aspects to the new eight-speed auto, but the most amazing part is that it’s the same package size as the outgoing six-speed auto. This obviously saved GM a ton of trouble and expense since they didn’t need to work over the C7 to get it bolted in place. The two extra gears didn’t even add any weight. In fact, due to the extensive use of lightweight materials and component redesign, the new trans comes in eight pounds lighter than the six-speed.

“GM’s new 8L90 eight-speed automatic represents a rare win-win scenario for customers,” said Kavoos Kaveh, global chief engineer for eight-speed automatic transmissions. “It offers greater performance and efficiency, while weighing less than the transmission it replaces. That’s a rare accomplishment in the industry today – and one for which GM has been awarded more than two dozen patents.” Also, the extra gears were added more for performance than fuel economy, although mpg did go up a bit. So now there are six “go” gears and two overdrives. This makes for a very close-ratio setup and it makes it easier to keep the LT1 (or LT4 in the Z06) in the sweet spot of the rpm range.

The torque converter design, with a turbine damper, complements performance with excellent refinement at low engine speeds. “The Corvette’s new eight-speed automatic delivers the comfort and driveability of a true automatic transmission, as well as lightning-fast shifts,” said Kaveh. “It was designed to enhance the driving experience, with performance on par with dual-clutch designs, but without sacrificing refinement.”

The new trans is built at GM’s Toledo, Ohio, transmission facility and will eventually migrate over to many other GM vehicles.

With four simple gearsets for optimal efficiency and five clutches (two brake clutches and three rotating clutches), creative packaging enables the new eight-speed automatic to fit the same space as the outgoing six-speed automatic – and the powerflow only uses two open clutches for low-spin losses, which further enhances efficiency. This architecture also features a turbine shaft node that reaches to the outside of the barrel, enabling easy execution of a high-resolution magnetic speed sensor. The turbine shaft itself is very short, keeping oil channel drill lengths to a minimum. The rotating clutches are located near the front of the transmission, with short oil feed channels, supporting the transmission’s very fast shifts.

Extensive use of aluminum and magnesium make it more than eight pounds (4 kg) lighter than the six-speed.

The greater overall performance and efficiency enabled by the 8L90 in the Corvette is due primarily to a new wider 7.0 overall gear ratio spread, which enhances off-the-line performance with a more aggressive First gear ratio – 4.56 vs. 4.03 on the six-speed – helping achieve a quicker 0-60 time.

The top gear ratio is 0.65 vs. the six-speed’s 0.67. Combined with a new, numerically lower 2.41 rear axle ratio in the Stingray vs. the 2.56 gear used with previous six-speed automatic models, engine rpm is reduced by 8 percent (123 rpm) on the highway at 70 mph. The lower engine speed reduces fuel consumption, while a new torque converter design enhances refinement, particularly during low-speed gear changes.

A new Gen II transmission controller analyzes and executes commands 160 times per second, and wide-open throttle upshifts are executed up to 0.08 seconds quicker than those of the dual-clutch transmission offered in the Porsche 911. This required a very precise valvebody.

An industry-first off-axis, chain-driven binary vane-type pump – located within the valvebody – effectively allows for two pumps in the packaging size of a single, which contributes to lower parasitic losses and optimal priming capability, as well as ideal oil routing to the controls system. The binary pump is located very low in the sump, for greater cold prime operation – as low as -40 F (-40 C) and excellent high-speed operation with stable line pressure.

The binary pump enables a 60 percent reduction in pump torque at points that represent large portions of the operating duty cycle, compared to the 6L80 six-speed, which is a significant contributor to the overall efficiency gains offered by the 8L90.

More than 550 computer-aided engineering analyses were made during the development of the 8L90 to ensure strength, durability, performance, and refinement. The architecture features a one-piece case with integral bellhousing for enhanced powertrain stiffness, as well as a detachable extension for the Corvette’s rear transaxle arrangement.

In the ’15 Corvette Stingray, the 8L90 enables a class-leading 29 mpg EPA highway estimate – a 3.5 percent increase in fuel economy over the previous six-speed automatic – and a quicker 0-60 time (3.7 seconds), all while delivering wide-open-throttle upshifts quicker than those of the dual-clutch transmission offered in the Porsche 911. Shift time quickness and improved responsiveness are accomplished with the new Gen II controls system. VFS solenoid technology and three internal speed sensors give the 8L90 the capability for world-class shift performance. The new transmission controller is mounted external to the transmission and has a processor that executes hundreds of calculations and commands every 6.25 milliseconds.