Newsletter
Sign Up today for our FREE Newsletter and get the latest articles and news delivered right to your inbox.
Home
GM High Tech Performance
How To
Transmission 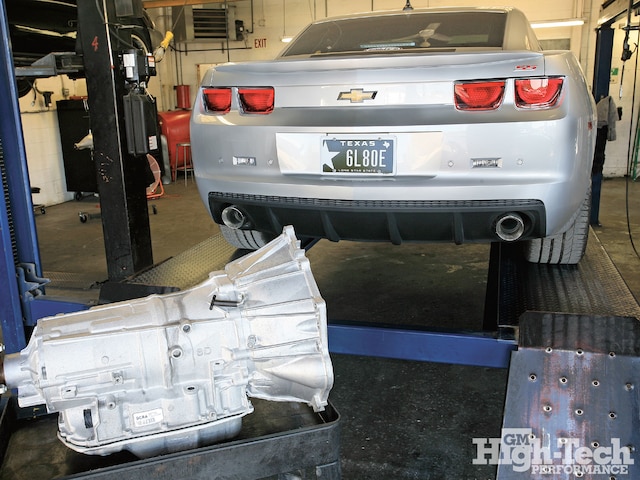 The row-your-own-gears crowd will always think that they're better drivers, but at least stab-and-steer boys needn't suffer from gear envy anymore. In Camaros and Corvettes of just one generation ago, the term "six-speed" distinguished a manually shifted machine from an automatic, but that's not the case anymore. With the introduction of the 6L80E in the '06 Corvette, the gear tally is all tied up at six for both manual- and automatic-equipped GM performance machines alike. That means automatics can now run just as quickly as their clutched stablemates down the dragstrip in stock trim, and outright destroy them once a higher-stall torque converter is thrown into the mix. However, as with any piece of hardware that's brand new from the ground up, hot rodders were destined to blow them to bits with prodigious doses of LS horsepower before the aftermarket had a chance to catch up with stronger internals. Fortunately, thanks to companies like Circle D Transmission, the wait for near-bulletproof 6L80E automatics is over. Circle D has been beefing up GM's new six-speed since they first hit the streets, and we recently visited its shop to find out what it takes to prep a 6L80E for battle.

Compared to the 4L60E GM bolted into C5 Corvettes and fourth-gen F-bodies, the 6L80E is one brute of a transmission. In GM speak, the "6" in 6L80E denotes the number of forward speeds, while the "80" is an arbitrary figure that represents its strength. Consequently, the 6L80E is essentially the replacement for the venerable, TH400-based 4L80E rather than a successor to the 700R4-based 4L60E. Not surprisingly, GM's new six-speed is reserved for only the most demanding applications such as fifth-gen Camaros, C6 Corvettes, and heavy-duty trucks and SUVs. With fifth-gens weighing in at a portly 4,000 pounds, an extra two speeds make it easier to get all that mass moving off the line while still keeping the motor in the fat part of the powerband at WOT. "Stock versus stock, the 4L80E and 6L80E are very similar in terms of strength," explains Kyle House of Circle D. "The main difference is that the 6L80E has much more versatile gear ratios. With a ridiculously low 4.03:1 First gear, it's a stump puller. The 4L80E is more proven because it has been around much longer and more parts are available for it, but the 6L80E has come a long way and they can handle tons of power with a few basic upgrades."

According to Circle D, GM rates the 6L80E's capacity at 375 rear-wheel hp and it often burns up clutches once exceeding the 400 hp mark. It certainly doesn't help that this transmission tends to run very hot, which Circle D rectifies on its shop car with two in-line trans coolers. "The mechanical workings of these transmissions are pretty stout, but the weakest links are the 3-5-Reverse clutches and the 4-5-6 clutches. The next component most prone to failure is the spline area of the 4-5-6 hub where it engages into the output carrier," says Kyle. "To address these needs, our standard rebuild includes heavy-duty 3-5-Reverse, 4-5-6, and 2-6 clutch packs. They feature custom nitrided steels to prevent warping, and more durable clutch linings that are more resistant to heat. With these modifications, a 6L80E can handle 500 to 600 rear-wheel horsepower in the typical street/strip application, although we have had customers push them all to the way to 1,000 hp."

Another major departure from past GM transmissions is that the 6L80E has no bands-just clutches-and relies heavily on electronics for all aspects of operation. By eliminating the bands, GM reduced the number of torque-handling components inside the transmission while also improving shift quality. The downside is that the timing of clutch engagement and disengagement, as well as clearances, must be very precise in order to prevent internal damage. Even at stock horsepower levels, Circle D reports that properly tuning the 6L80E is critical to transmission longevity. "The 6L80E is a clutch-to-clutch unit, which means that unless one clutch engages at exactly the same time that another clutch is disengaging, the transmission will bind up. That's where the electronics and tuning come into play," explains Kyle. "When GM builds the 6L80E at the factory, it installs a control module directly to the valve body. It houses all the pressure control solenoids, shift solenoids, and the transmission control module in one sealed unit. There are tons of electronic adjustments that can be made to alter clutch pressures and apply times for durability. The factory tune is good until you start putting more power through the trans. Once that happens, the clutches start slipping on initial apply, which messes up the timing. Depending on a customer's needs, we can modify the transmission control module so it's custom tailored to a specific application using HP Tuners software."

In addition to walking us through the rebuild process, co-owner David Dolejsi and Senior Technician Kyle House of Circle D gave us a sneak peek at some prototype hardware that is currently in the works to further fortify GM's six-speed. Co-owner Sherry Dolejsi was very careful to say that while they won't call their improvements bulletproof, Circle D is constantly making modifications to its procedures and looking to make certain areas of the transmission stronger. "It's a work in progress and will be for quite some time. As we strengthen one component we find the next weak link. The potential for this transmission is amazing, but there are growing pains." Due to Circle D's efforts, late-model GM enthusiasts can rest assured that the 6L80E will only get better as it continues to evolve.