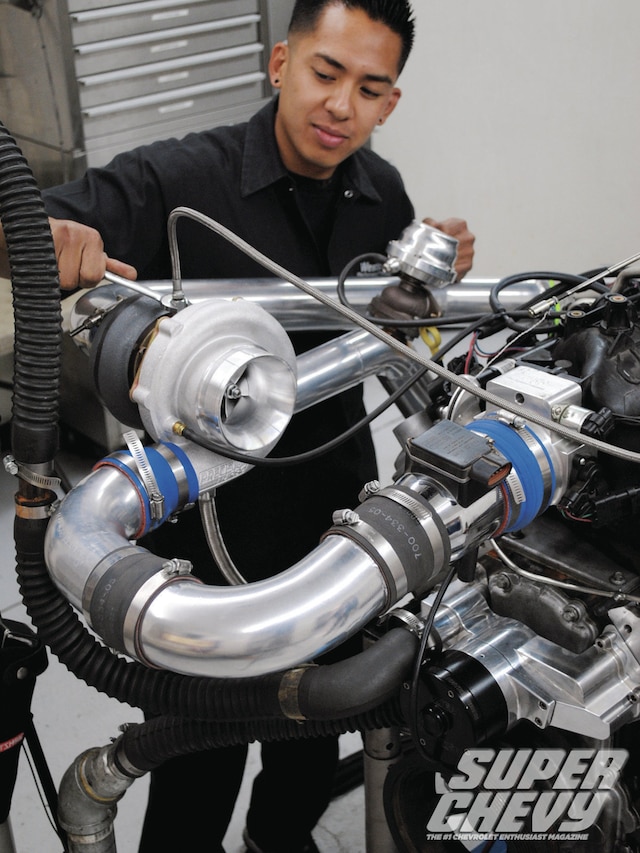 From day one, the idea behind Modern Mouse was to subject the 5.3L LS to all manner of testing, including everything from bolts-ons to blowers. Nitrous, a stroker upgrade, and even old-school carburetion helped round out the battery of tests, but the LM7 (now stroked to 383 cubic inches) emerged not only unscathed, but begging for more.

Subjecting Modern Mouse to all this abuse helped demonstrate the gains offered by various modifications. This in turn helps readers make informed decisions about which route to take when it comes time to modify their own ride. The impressive power output offered by the stock and modified 5.3L also makes a compelling case for choosing the little LM7 for your Chevy-powered hot rod in the first place. You might think that after six different installments, we would run out of things to test, but we have just scratched the surface. This month, we decided to introduce not just Modern Mouse, but a pair of LM7s to turbocharging. Confused? Read on!

Though Modern Mouse was currently sporting no less than 383 cubic inches, we decided to take a step back and illustrate the gains offered by turbocharging to two different 5.3L combinations. We were lucky enough to secure a second stock LM7 to run our first test this month. We figured running both stock and modified combinations would help our readers--after all, not everyone is going to build a duplicate of Modern Mouse.

The stock 5.3L was purchased from a local wrecking yard at an exceptional price, but we soon found out why. The LM7 take-out was advertised as complete, but was actually missing the throttle body and exhaust manifolds. It also had a cracked oil pan.

We cured this situation with an Accufab throttle body and a Moroso F-body pan we had from a previous test. The stock motor was run with a set of QTP long-tube headers and an electric water pump. For the single turbo, we got a set of JBA shorty headers. Tuning was provided by a FAST XFI/XIM management system and a set of 36-psi injectors. Run in stock trim (after optimized tuning), the 5.3L produced 361 hp at 5,400 rpm and 386 lb-ft of torque at 4,600 rpm. Torque production exceeded 350 lb-ft from 3,200 rpm to 5.400 rpm.

The 5.3L was then subjected to boost from a single turbo kit from HP Performance. The kit was designed for a Chevy truck, but it illustrated the potential of boosting a stock 5.3L perfectly. The kit included a dedicated Y-pipe that hooked directly to the stock exhaust manifolds (or our shorty headers). Though available with different turbos, we chose a 67-mm T4 HPQ turbo from Precision Turbo. It was capable of supporting nearly 800 hp on the right application, so it had no trouble on this otherwise stock 5.3L.

Unlike the stock 5.3L, we built a custom twin turbo system for Modern Mouse. Though custom, the system illustrated what is possible with properly- sized turbos on an already powerful normally aspirated LM7 combination. The twin turbo system featured a pair of 76-mm turbos combined with a twin-core, air-to-water intercooler that featured dual 3-inch inlets and a single 3.5-inch outlet all from CX Racing.

Additional components included a pair of 45mm Hypergates and a single RacePort blow-off valve all from Turbo Smart. The exhaust system featured shorty truck headers from JBA connected to the turbos using short tubing sections designed to adapt the stock exhaust flanges to the T4 turbos. The Turbo Smart Hypergates were positioned inline on the adapter tubing, while the single RacePort blow off valve was welded to the single 3.5-inch aluminum inlet tube.

CXRacing also supplied the necessary 3-inch aluminum tubing, couplers and clamps to connect the turbos to the intercooler as well as the 3-inch stainless tubing, v-band flanges and clamps used to complete the exhaust. In addition to offering complete kits, CXRacing was a one-stop source for our do-it-yourself turbo kit. The final upgrade was to replace the 36-psi injectors with a set flowing 75 lbs per hour.

Being so close to 1,000 hp, it took all of our will power to stop from cranking up the boost. In the end, we decided to limit the boost to a reasonable level.

19 Modern Mouse-NA vs Twin CX Racing Turbos (12.8 psi) Though we ran Modern Mouse at lower boost levels, the final test resulted in peak power numbers of 963 hp and 868 lb-ft of torque at just under 13 (12.8) psi. That represented a gain of 448 hp and 361 lb-ft of torque over the normally aspirated combination.