Project American Heroes III Is A Chevelle And The Build Has Begun. 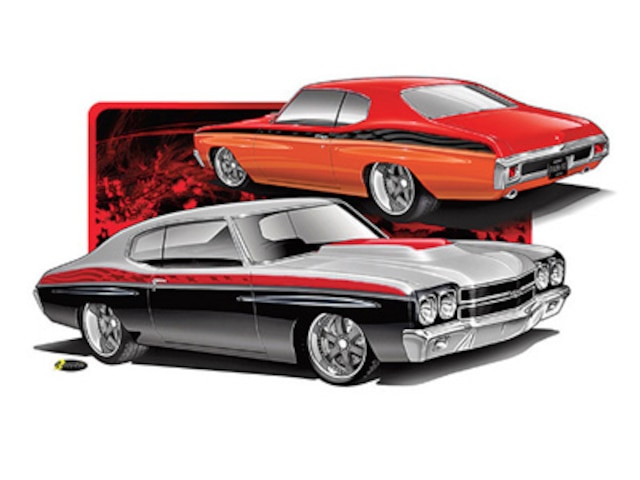 The Project American Heroes II '69 Camaro built by Route 66 Motorsports (New Lenox, Illinois) exceeded our wildest expectations at the Barrett-Jackson Collector Car Auction this past April in Palm Beach, Florida. Associate Editor Patrick Hill of Super Chevy tells the story: "We anticipated PAH II making an impressive splash at Barrett-Jackson, but we about lost our minds when the gavel banged and the auction ended. Before we knew it, the bidding price was at $100,000 and starting to slow down. But the various bidders regrouped and the bidding took off like a rocket.

In the blink of an eye the selling price hit $250,000 and had everyone stunned with excitement. After some more encouragement from First Lt. Mark Little from the podium, the price eclipsed $400,000 and had the arena buzzing. When the gavel banged and all was done, the price on the screen was $500,000.That's right, half-million dollars to benefit the Armed Forces Foundation."

Hats off to the new owner, Dave Parker, of Los Angeles, for his love for our country and our military personnel. A Vietnam veteran, Dave is now enjoying his incredible and historic PAH II '69 Camaro. Knowing the ways in which many military families have already benefitted from the Armed Forces Foundation with funds generated through the sale undoubtedly makes that LS7 motor sound even sweeter slicing up those California canyon roads.

As this missive is being penned, U.S combat troops are withdrawing from urban areas in Iraq, but the fight against terrorism still rages in Afghanistan. Tragic life-changing injuries, traumatic experiences, and the invisible scars that remain from battle require that those of us who enjoy our freedom stateside need to do all we can to support our newly arrived heroes. That's why organizations like the Armed Forces Foundation are so critically important. And that's why we're building another hot rod to raise money for the Armed Forces Foundation.

Project American Heroes III is a '70 Chevelle that will get the full monster treatment from Bill Jelinek & Company at Route 66 Motorsports. The Chevelle will feature an LS-series motor, six-speed automatic transmission, tricked out suspension, and appropriate killer wheel and tire combination.

As the stinger hood on the PAH II Camaro hearkened back to a '60s element, so too the Chevelle will lean on strong heritage by featuring a killer L-88-style hood and signature Project American Heroes patriotic graphics.

Imperial Blasting has invested countless hours of research and in-shop testing to develop its own proprietary media called IB Mineral. The IB Mineral used on Project American Heroes III produced a clean, undamaged surface with zero warpage and no damage to the metal. Tested on hundreds of cars, the IB Mineral has been found to deliver optimal results.

Imperial Blasting has stripped cars for some of the top builders in the country, including Troy Trepanier and the Ring Brothers.

Rather than attempt repairing the tired sheetmetal, the driver¿s quarter was removed. Believing that factory metal should be saved if at all possible, Jelinek decided to keep the passenger quarter in place during the blasting to see if it was worth saving.

Both floors and rocker panels were in very good condition. Properly able to assess the condition of the passenger side quarter-panel, Bill decided to simply replace both driver and passenger sides.

Bill Jelinek's son Nick is put in charge of the metal replacement. The passenger side quarter is carefully cut free from the factory welds and removed.

Nick takes out his trusty hammer and dolly and carefully straightens out the mating surface for the new quarter-panel.

The door jamb and window ledge areas receive special attention. In the process of preparing the surfaces, the new quarter is mocked up and removed to insure perfect fit.

The rear windsow channel is cleaned up with the high speed grinder for a nice clean edge for panel installation.

Having received equal attention from Nick for the new National Parts Depot quarter-panel, the driver side is fitted for the new metal. Satisfied, Nick removes the mocked-up panel in order to prepare the edges for welding.

A pneumatic hole puncher is called into service to create holes approximately two to three inches apart for welding.

The door jamb area is also punched to accommodate the MIG welds. The welds will be ground smooth and produce an OEM quality finish.

The NPD quarters are clamped in place and ready for final welding. Body lines are checked and lined up for perfect trunk and door gaps.

MIG welds in the hands of young Jelinek are clean and strong. Although the panels are only tack welded to the car at this point, Nick later repented for not wearing proper welding gloves.