Project Orange Krate Gets Some Dents Removed The Correct Way. 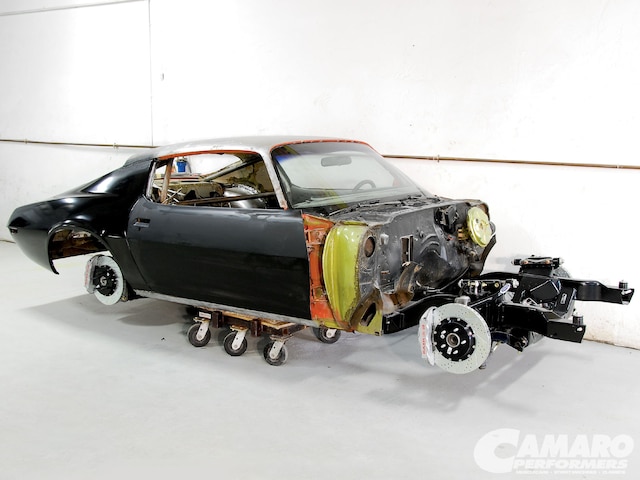 In numerous ways, almost everyone involved in the classic car hobby has worked diligently as a preservationist, whether they know it or not. For many, it's not only the act of restoring and maintaining a vintage ride in top form, but also ensuring that it retains its purity from when it was first rolled off the assembly line. Some car owners will go on quests to locate genuine NOS parts while others choose to utilize finely crafted aftermarket parts throughout their builds. Either way, the job gets done and the cars live on for decades to come. The initial teardown of Project Orange Krate revealed many issues that were not visible when it was first purchased, especially ones lurking beneath its once-glossy surface.

Numerous dirty little secrets were uncovered when Orange Krate’s body was chemically stripped. It was obviously masking some prior damage.

Once the body was stripped, it was apparent that the car had been in an accident involving the passenger side, with collision damages progressing from the door well into its quarter panel. In a past issue of Camaro Performers magazine, we covered the replacement of the panel that had previously been poorly installed and required it be removed and replaced with a fresh aftermarket section. When Peter Newell and his team at Competition Specialties in Walpole, Massachusetts, evaluated the damaged door, there were a number of issues which led them to make the decision to repair the original factory skin rather than replace it. Once the door had been stripped clean of its coating of paint and body filler, the revealed "repair" confirmed the obvious damages were pulled in the old-school method of drilling holes and using a dent puller to rework the sheetmetal. The repair got the job done, but required an overabundance of body filler. When Newell and his team reviewed the door, they noted that it fit and closed perfectly and that its edges, especially those along the bottom edge, were free from any corrosion or past rust-related repairs. This led them to focus their concerns on properly repairing the skin so it could be maintained on the car.

To get started, team member Brian Jordan ran his hand across the door panel to determine the exact areas needing attention. He fully prepared the doorskin's surface by grinding out any remaining body filler with an air-driven angle disc grinder topped with a 24-grit disc. He then broke out his Uni-Spotter Model 4500 electric starter welder stud gun and proceeded to get busy securing a number of copper welding studs in place, preparing them for pulls with a Posi Cam slide hammer.

Once the body filler was stripped off, it was easy to see the door had been repaired in its prior life. A careful evaluation confirmed it was a bumper-height hit that had been repaired using a dent puller and body filler. Since the door is still in solid shape, we decided to retain the factory panel and repair it correctly.

Let's follow along as Jordan brings the panel back to life to preserve some of Orange Krate's original factory personality.

3. To properly pull the dents, a Uni-Spotter Model 4500 electric starter welder stud gun combined with # 1001 Uni-Spotter universal welding studs and a Posi Cam slide hammer will do the trick. The kit is designed for easy welding application and stud removal once the dents are pulled.

4. A pair of air-driven grinders, combined with 24-grit sanding discs from 3M, will assist in the removal of any remaining body filler to create a nice clean surface to work on. Pictured here are a 3-inch angle grinder and 5-inch standard grinder.

5. Competition Specialties team member Brian Jordan got started by first removing the glass from the door. He then followed (while wearing safety glasses) with an air-driven angle grinder topped with a 24-grit disc to complete the elimination of any remaining old body filler on the door surface.

6. Jordan used an air-driven die grinder topped with a cone tip to carefully remove some of the old body filler from some of the smaller holes in the door.

7. With the doorskin cleaned and ready to be worked on, it’s a perfect time to run your hand across its surface to determine which areas will need attention by feeling for both high and low spots. Often, an area that visually appears fine will still be in need of attention.

8. It’s wise to work one area at a time and focus on correcting its immediate issues. Using a Uni-Spotter electric stud gun, Jordan attached a number of welding studs in place to focus on a particular damaged area.

9.This image lets you see the studs welded to the doorskin waiting for the next step. Note that the studs are made from 2.2mm solid copper and are quite flexible.

10. Using a Posi Cam slide hammer designed exclusively for this application, Jordan worked each stud to relieve the damaged area and bring the doorskin back to its original form.

11. In addition to the Posi Cam slide hammer, the chisel end of a body shop hammer was also used to relieve any high spots on the surface.

12. Once the pull was completed, a standard pair of side cutters made removing the studs a snap.

13. This image lets you see how, when working on one of the areas requiring a lengthy pull, the studs were secured to the doorskin to follow the line of damage.

14. As Jordan moved on to another area needing attention, the Uni-Spotter gave off a shower of sparks as its electrical charge secured the copper studs to the panel. This occasionally happens in the welding process.

15. Jordan masterfully worked the Posi Cam slide hammer to bring the doorskin back to its original glory by methodically working each stud to perfection.

16. Once all the pulls were completed, Jordan made a final pass over the door’s surface with his hand looking for any remaining high spots on the skin’s surface. He used the chisel end of a body shop hammer to carefully work the areas into place.

17. With the dent removal process completed, it’s easy to see the areas attended to.

18. Note the black spots from where the Uni-Spotter welded the copper studs to the doorskin outlining the path of correction to the original factory steel.

19. With all the pulls complete, the door was removed using an air-driven ratchet capped with a ½-inch socket. The door was then placed onto a work stand to proceed with the initial bodywork stage.

20. To clean up the doorskin and add plenty of bite for the body filler to adhere to, Jordan used an air-driven 5-inch grinder topped with a 3M 24-grit sanding disc. During this process he continued to feel the exterior of the skin with is hand to locate any remaining high or low spots.

21. Once the doorskin was ready, it was time to mix up a batch of Evercoat Rage Xtreme lightweight body filler to use as a skim coating on the door.

22. Jordan worked the skim coating of Evercoat Rage Xtreme filler across the door in a sweeping left to right fashion.

23. Jordon makes sure to cross over the skin to ensure an even application.

24. A Hutchins Hustler straight-line inline air board sander was used to properly sand the panel, and will be used along with a combination of 3M 36-grit and 80-grit sandpapers.

25. Once the body filler had cured (usually 20 minutes, depending on temperature and humidity) the panel was worked first with 36-grit to square everything, then Jordan followed with 80-grit to complete the repair.

26. The completed panel was coated in black self-etching primer to protect it from the elements until the final bodywork stages are ready to be tended to. Orange Krate was able to retain its original factory sheetmetal instead of having to be reskinned.