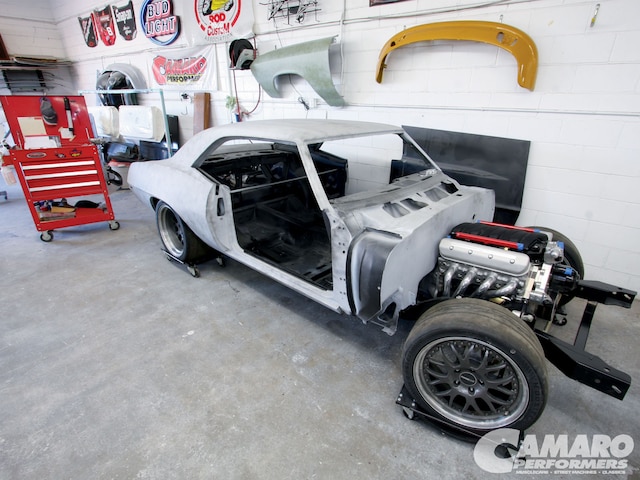 Some gearheads are recent converts to this hobby, while others have been infected with the need to wrench together hot rods for as long as they can remember. Gregg Blundell falls squarely into the latter category. He says, "I've always been into cars and so were my friends. Twenty or so years back, my roommates, Evan and Pete, and myself had a dozen or so cars between us at one point. Years earlier, my dad got me started and taught me what he knew about fixing cars. He said we could fix up the POS in the driveway, make it driveable, and I could have it for myself. Within a few months of getting the car back on the road, I had blown the motor and was already looking for something bigger."

In his youth, Gregg would work on anything that needed fixin' to get him down the road, but these days his tastes have narrowed just a bit. "I've always liked muscle cars. I especially like the lines on the first-gen Camaro-the '69 in particular. Combine that with the fact that the older I get, the less interested I am in driving something that feels like rowing a boat around corners, or praying that the thing will actually stop before the next solid object. I spent a lot of time on pro-touring.com and lateral-g.net and was bit by the handling bug," Gregg says.

After buying a 1969 Chevy Camaro coupe and gathering a ton of parts, Gregg was ready to get to work. It was an older restoration, void of rust, and had a new 420hp crate motor. Gregg figured after just a few weekends of work he would be cruisin' the Southern California coastline. That was spring of 2005.

What got in the way? Life. He was just too busy running his growing IT business to put any serious time into the car. Eventually he ran across our friends at Best Of Show Coach Works in San Marcos, California. Gregg says, "It's great to finally have a shop that knows what they are doing. I can't say enough about them or the work they do. It's a bonus that they're only 10 miles from my house, and they let me help work on the car when I have free time. The Camaro was mediablasted and then fitted with two new quarter-panels, DSE mini-tubs, and subframe connectors. They also smoothed the firewall and repaired all the past ills."

The small-block is long gone and in its place is an LS7 Gregg had massaged at RPM Motors in Santa Clarita, California. Always on the lookout for deals, Gregg found a guy selling a Ron Davis radiator online. On a hunch he drove to Phoenix and ended up coming home with most of the guy's car, including the radiator, Art Morrison C6 subframe, headers, an LS6 engine, 4L60E trans, Chassisworks g-Bar four-link, and a truck full of other widgets. The extra drivetrain was sold off and the remaining parts are destined for Gregg's '69. His goal is to build a nice cruiser that's comfortable enough for long hauls and capable of hitting the occasional road course or autocross. Needless to say, his first trip will be that overdue cruise along California's coastline.