Work continues on transforming Jegs’ stock Monte Carlo SS into something that performs as good as it looks. 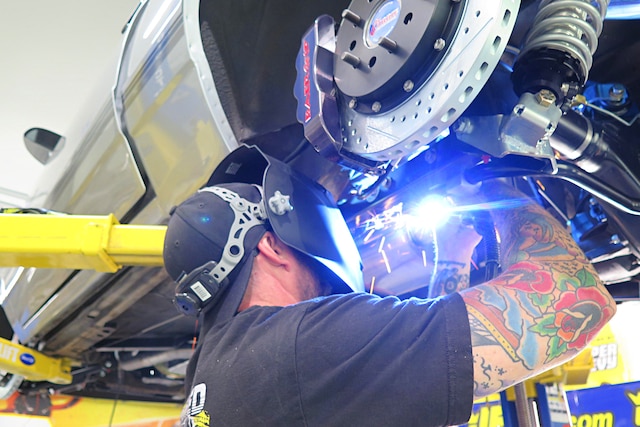 At the end of day four we’re a bit beat and like yesterday much of the work involved plumbing, wiring, or hooking up systems that were installed over the past few days. The hard lines for the Baer 6P brakes were finished and we started the bleeding procedure. On the wiring side we hooked up the fan relays, but instead of using inline fuses we went with 30 amp breakers. And so the day went, wire in the vacuum pump, clean up the wires running to the Jegs starter, fine tune the shifter linkage; it was a list that seemed to get longer as we went, but by the end of the day quite a few things were marked off of our to-do list.

In other happy news our headers arrived from Jegs and they fit the tight confines of our engine bay perfectly, even with the raised ports on the ATK heads. With that done we could turn our attention to one of the last “big” projects, the exhaust system. Jegs had send us over a very nice G-body kit featuring pre-bent, stainless, 2.5-inch pipes and a pair of stainless high-performance mufflers. Having the pre-made kit saved us a ton of time, but we still spent time making sure everything was exactly where we wanted it before tacking it place. The only part we had to make was the transitions from the mid-length headers to the Jegs exhaust system. Overall the kit was easy to get in, looked great, and we can’t wait to hear how it sounds tomorrow when we finally fire up our ’87 Aerocoupe project.

Speaking of firing up the SS we also started adding oil and some of the other fluids in preparation of that magic moment when our ATK crate engine will roar to life. Tomorrow we will also be tossing on our new wheels and tires from Jegs. The rollers arrived from Jegs mounted, balanced, and ready to install, saving us precious time that we’re fast running out of. And, since it’s ok to look good and go fast, we will also be adding a Jegs dress-up kit to the ATK 383 stroker. Tomorrow is our last official build day, so we expect to be up early and in the shop late buttoning up all the little last minute details so we can get this G-body on the road.