We keep working on transforming Jegs’ stock SS into something that performs as good as it looks. 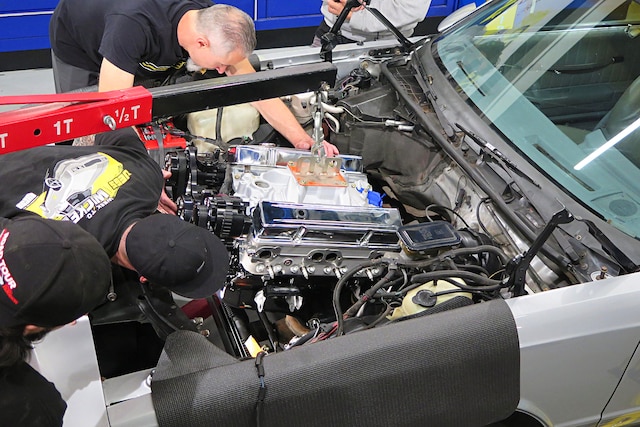 Day two of our Week To Wicked builds was a bit tough. After all, on day one so much happened in terms of progress. The old parts were ditched and a ton of new parts were bolted in place including the Baer brakes, QA1 Level 3 suspension, and Unisteer rack system. But day two turned out to be more about prepping the car for its new driveline from Jegs. Yea, most of the morning was spent buttoning up items from day one and getting the 500-hp 383 small-block ready for its new G-body home. But, it’s a process and some parts move faster than others.

First up was installing the billet serpentine drive system from All American Billet and a shiny new mechanical fuel pump from Jegs. The engine will be getting a FiTech fuel injection system, but to get the engine installed into the car we tossed on an extra intake we had in the shop (so we had a place to bolt our lift plate to). While the engine and Jegs 4L60 transmission were getting prepped we finished up the rear Baer brakes, messed with the linkage for the Unisteer rack and started sorting the “ still need” from the “no longer needed” mess of wires and hoses in the engine bay.

Our 1987 Monte Carlo SS Aerocoupe came from GM with a sluggish 180 hp (an optimistic number) 305-inch V-8 carbureted mill. The new ATK stroker from Jegs is rated at just over 500 hp, so the difference in performance should be night and day. To get the engine in place we swapped to some clamshell-style engine mounts with poly bushings and a Jegs transmission crossmember. With all of that done we slid the engine hoist into place and lowered the engine/transmission assembly into place. The long nose of the Monte Carlo gave us a headache so we fired up the forklift since it had extra reach. With a bit of effort, and a few bleeped out words, we persuaded the small-block into place and bolted everything down.

So, while it may not seem like we accomplished a lot, we are actually right on schedule in terms of progress. Day 3 will be all about installing the cooling system and hooking up a lot of water, AC, heater, fuel and other lines. We should also start installing the EFI system from FiTech. If we get ahead of the game we might even work on installing the new exhaust system.