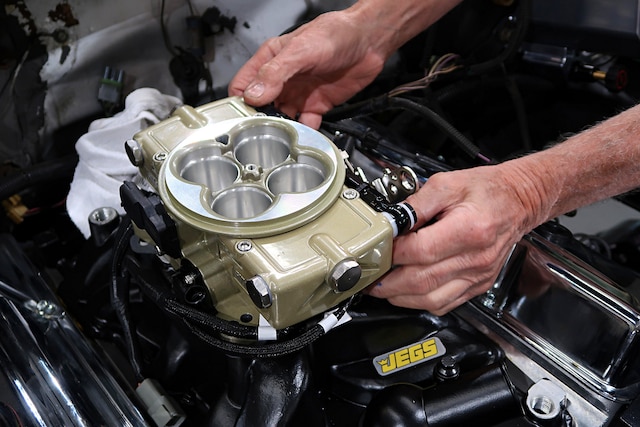 Day three of our Jegs Week To Wicked build was a bit of a grind. Mostly because it involved the less glamorous and somewhat tedious task of wiring and plumbing. Certainly necessary tasks, but somewhat less exciting than bolting on cool widgets. The Jegs supplied 4L60 transmission was mated to the 1987 Monte Carlo SS Aerocoupe’s shifter linkage and we continued hooking up the ATK 383 small-block. We did have a small hiccup when the headers didn’t fit since we didn’t realize the ATK stroker had raised port heads. After a quick call to Jegs the replacement headers were ordered and will be here tomorrow. Hey, it’s all part of hot rodding, right?

One of the last major parts to be installed was a complete FiTech EFI system. This was their new Classic system which is rated at 650 hp, more than enough to handle our 500+ hp ATK mill. The carburetor-styled EFI unit was mounted to a Jegs dual-plane intake and will be fed by FiTech’s new Command Center 2. This compact tank is fed by the low-pressure mechanical fuel pump and then pressurizes the fuel for the EFI system. The Command Center two came with an integrated regulator and pressure gauge along with fittings and some push lock hose. It’s a super easy way to get EFI performance and as a bonus it looks great. The throttle body uses carb-style linkage, so it was very easy to integrate into our SS. Once the FiTech was in place we set the engine to TDC and dropped in the Jegs distributor.

We also started our cooling system by installing a Champion aluminum radiator complete with dual fans and a fan controller. Having this in place allowed us to start fabricating radiator hoses, and so it went. Wiring, installing, plumbing, fabricating brackets were all tasks happing throughout the day. We even found time to ditch the non-functioning aftermarket stereo in the SS and replace it with a slick Bluetooth-equipped iPod-ready unit from Retro Sound that fit perfectly into the stock dash. The slick Baer master cylinder, with integrated proportioning valve, was put in place, but that meant we had more… you guessed it… plumbing to get done. Hey, nobody ever said this project would be fast or easy, but we’re just past the halfway point and it’s looking like we might have some late nights in our tech center.

Tomorrow we will continue our version of Dances with Wires and install the computer to control our 4L60 Jegs transmission. All eyes will be watching to the parts delivery guy since he should have a full set of Jegs rollers to deliver. We should also tackle our exhaust system, install our QA1 carbon-fiber driveshaft, and, if luck is with us, we might even start adding fluids in preparation for firing up the reborn Aerocoupe on Friday.