1968 Track Rat Camaro project gets a lot closer to hitting the track! 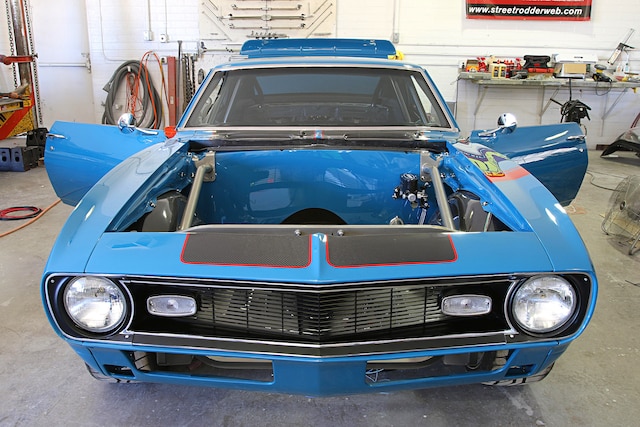 Projects. Some happen fast while others move along at the pace of a glacier. There are lots of reasons for a project taking many years to hit the road, but it's typically a lack of two things: time or money (or both). With our Track Rat 1968 Camaro, it was more of a time issue. Yeah, it seems like our job here is to just work on cars, but to be honest, there's a lot more going on and it's easy to get busy doing other projects and let our personal rides languish. Such was the case with Track Rat. We bought the rolling shell years ago, over 10 if you're counting, back when Camaro Performers magazine was still around. It was a first-gen that seemed to be in decent shape, but it ended up needing quarters and a few more bits. Once we had the bodywork pretty well sorted out, we came up with the bright idea of being different and giving the rear of the Camaro a widebody treatment. Well, that was harder than it looked and more than likely added years to the project. Sometimes the Camaro would sit for months while we were preoccupied with other tasks. But it always moved forward, even if slowly.

The project got a shot of adrenaline last summer when Spec Clutches came to us looking for a SEMA display car. Something blue and Pro Touring was on their wish list, so we volunteered. We had months, so it seemed easy enough, but things came up and eventually we were a month away from SEMA with a painted shell of a car and 80 percent of a driveline! Well, we had a promise to keep so we kicked the project into overtime (quite literally) and started knocking out the dozens of large and small projects left to do, all while doing our day job.

Did we make it? Yeah, sorta. Track Rat made it to SEMA on time, but it was more like a movie prop than a car, but it was there, looked great, and was closer to being a real-deal car than ever before. Since SEMA we've been chipping away at the last few things and our goal is to have it on track soon. It's been a long road up to this point and it's nice to see the light at the end of the tunnel, and know it's not an oncoming train. So follow along as we race to get Track Rat ready for the big dance and whole lot of steps closer to hitting the road.

1. With three weeks until SEMA this is where we were. No interior, no drivetrain, no wiring, no inner wheelhouses, and no grille.

2. First up was installing the Chassisworks Gemini down bars and Anvil Auto carbon-fiber inner wheeltubs. These had been trial-installed before, so there was almost no drama.

3. We did have to trim the carbon-fiber inner wheeltubs to clear where the Chassisworks down bar mated to the subframe. We also finished securing the AutoRad radiator core support using Chassisworks solid subframe mounts.

4. The steering column had been installed long ago, so we only had to worry about the steering shaft clearing the headers. It had been mocked up with a plastic LS engine, but never with the real deal.

5. We wanted wipers, but didn't want to cut a hole in our smoothed firewall. So, the best option was to use a wiper kit from RainGear Wiper Systems. The entire mechanism, including the multi-speed wiper motor, fit easily, and out of view, in the cowl area.

6. With the Anvil carbon-fiber cowl panel in place, the entire wiper system is neatly hidden away. We've used these systems before and they work great.

7. Track Rat needed wiring and since nothing in the car was stock we opted for a Highway 22 kit from American Autowire. The best part is that the main fuse block can be mounted just about anywhere. In our case, we decided to mount it behind the glovebox door where it would be out of the way, yet easy to access. Next to it is the fuse block for the Chevrolet Performance LS engine harness we picked up from Scoggin-Dickey Parts Center (SDPC).

9. We mounted the Optima YellowTop battery in the trunk using a billet mount from Eddie Motorsports. Besides cleaning up the engine bay, moving the battery to the trunk also improved the car's weight distribution. The cut-to-fit battery cables, from American Autowire, were run through the interior to bulkheads near the passenger side of the firewall.

10. Our 1968 Camaro was never a complete car so there were a lot of missing parts. For most of these items, like the headlight buckets, we hit up Classic Industries.

11. The original hood latch was finished off with black-anodized washers from Eddie Motorsports and a very cool stainless hood latch pin trim ring from Detroit Speed.

12. Moving to the back of the car we installed a pair of RS billet taillight bezels and a United Pacific LED lighting kit from Eddie Motorsports.

13. More parts from Eddie Motorsports were installed in the doorjambs, including their jamb vents and stainless strikers.

14. A new grille kit from Classic Industries was installed and really made the front of the Camaro look complete. With the lights in place we could finish running the wiring. Yes, that's an RS lower valance. The plan is to eventually use the turn signal openings as inlets for brake cooling ducts.

15. For rolling stock we went with Forgeline GZ3 wheels in 18x11 rear and 18x10.5 front wrapped in Falken RT615K 315/30/18 tires on all four corners. The quarter-panel stretch and mini-tubs out back gave us plenty of tire clearance while the Chassisworks front subframe afforded us more room for the bigger front tires.

16. To personalize the wheels we had Evod Industries make us these sweet center caps based on the artwork by Ben Hermance of Hermance Design. We think they came out bitchin.

17. Yeah, it's a '68, but we much prefer the Bowtie mirrors from the 1967 model year, so a pair from Classic Industries was added. At this point it was really starting to look like a car for the first time since we bought it as a rolling shell over 10 years ago.

18. The Camaro was shot with Axalta paint years ago, so our paint guru, Best of Show's Jon Lindstrom, went over the entire car and did some color sanding and buffing where needed and then polished the rest to perfection using a host of Meguiar's products.

19. One week before SEMA and the Camaro was finally getting its drivetrain. To help out in the home stretch, Mike Selvaggio, Efrain Diaz, and the owner of Best of Show Coachworks (BOS) Matt Alcala, came over to the TEN tech center to help get the 440-inch RHS LS engine and other bits installed. It was a very long week and I couldn't have done it without them.

20. Just as we planned, the Holley LS swap pan (PN 301-2) easily cleared the Chassisworks subframe system. Since our LS is rockin' a 4.125-inch stroke, we opted for the deeper Holley pan and it easily cleared our subframe.

21. With the engine in place, we could finish installing the super-compact Front Runner system from Vintage Air, bolt on the 102mm billet throttle body from SDPC and start plugging in wires from the Chevrolet Performance engine harness.

22. The best part of the AutoRad core support is that it runs straight across instead of curving inward toward the engine like the stocker. This meant that even with the massive radiator there was a ton of extra room between the engine and the dual fans. With the radiator installed we also installed the Eddie Motorsports fender braces, which did require a couple of extra holes, with Nutscerts, in the core support.

23. Many hours later this was the result and we breathed a sigh of relief when the Hooker 1 7/8-inch stainless headers fit beautifully. The Airaid air intake kit was super easy to assemble and we love using it on these projects since it comes with more than enough parts to build an air intake for just about any project. Matt Alcala, from BOS, TIG welded up some custom stainless radiator hoses and we worked on plumbing the FAST fuel rails down to the rest of the fuel system.

24. "The rest of the fuel system" included a Tanks Inc., fuel cell with an internal 255-lph pump. To save time, we used Earl's push lock lines for the fuel feed and return lines. Along the fuel rail we installed a Holley billet fuel filter and EFI regulator.

25. Backing up the 440-inch LS engine is a TREMEC Magnum six-speed manual from American Powertrain. The American Powertrain transmission kit included all the needed hydraulics along with this sweet White Lightning billet shifter.

26. Our Camaro was set to debut at the 2016 SEMA Show in Spec Clutches booth, so they sent us over one of their beautiful mini-twin clutches (PN SC66PT SC09SM10).

27. Part of the American Powertrain kit was this Hydramax throwout bearing assembly, which is a much better option compared to the plastic line factory part.

28. All hands were on deck for doing the math needed to get the spacing right on the American Powertrain hydraulic clutch assembly. A leg from an LS engine stand served well as a straightedge across the Quicktime SFI-rated bellhousing.

29. With everything done, we lifted the TREMEC Magnum under the Camaro and worked it into place.

30. With the transmission installed, we were able to take some measurements and order up a 3.5-inch aluminum driveshaft from Inland Empire Driveline. At this point, we had the car mostly together, but there were only three days until SEMA move-in.

31. Did we mention that the Camaro didn't have an interior? Well, lucky for us TMI had us hooked up with a complete bolt-in interior kit that would make our project look like it had spent weeks at a custom shop. For the front seats they stitched up their new sport seats in black and grey with red accents.

32. Sunday was move-in day for the show so Saturday—late into the evening—was spent installing the TMI interior along with the Auto Meter Stack gauges and Racepak G2X data system. Other dress up items included a carpet kit from Classic Industries; a Safecraft fire extinguisher; and a completely badass billet shifter lever, knob, and boot trim ring from Finch Performance (sourced through American Powertrain).

33. We were still wiping off the first coat of wax when the trailer showed up to take our project to the SEMA show. To be honest, it was nowhere near ready to hit the road, but our decade-long project was finally a car again and we were pretty damn happy with how it came out. Since the show we've been slowly getting her ready to hit the track for what we're sure will be a great payoff for all the effort put forth.