Week To Wicked Day 4: Moving Closer to Finishing Our 1972 Camaro 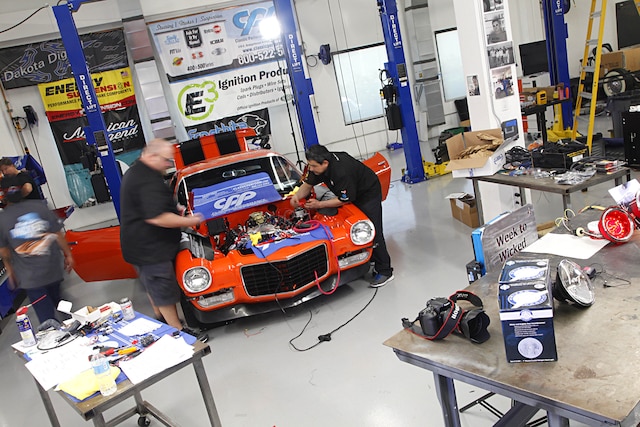 It’s day four of the Super Chevy Week To Wicked, Presented by CPP, and we admit it, we’re tired. The best analogy is a gas pump; the closer you get to being done, the slower the dial spins. The big ticket items are done, now it’s the hundreds (literally) of tiny tasks that turn minutes into hours and hours in days. Most of day four entailed chasing down parts and wiring. Jeff Abbott from Painless was busy running miles of wires and getting every connection just so. Add in the harnesses from the Holley Terminator Stealth EFI and the Performance Automatic transmission controller and it’s a lot of wiring that has to be done dead nuts perfect if we expect to fire up this Camaro tomorrow or Saturday.

You know that pie chart of working on your car? Yea, the one where one sliver is titled “working on car” and the rest of the pie is marked “looking for that damn part/tool you just had in your hand”. Yep, that was us. In the mayhem of building the Camaro, and shooting video, a small 6-inch cable that interfaces the Dakota Dash to the Holley Terminator went MIA. The shop was searched, searched again, and even the trash bins were rummaged through. No dice. Turns out it’s critical and not something you can buy at the local auto parts joint. We have video, so we know we had it, but it vanished just like a sock in the laundry. Dakota Digital was able to next-day-air us one, so tomorrow we should have the two computers jabbering to each other.

In other wiring news the Optima yellow-top battery was installed and Jeff installed the very cool Painless ground-strap kit. According to Jeff many of the tech calls they get turn out be related to poor grounds. His pro-tip was to grind away the paint between the strap and the metal it’s being attached to, dab on a little dielectric grease, and secure it using a bolt and a star washer. Wiring easily eats up two days of the build, but the payoff of having a correctly wired car justifies all the effort. Towards the end of the day the guys from United Pacific showed up to hook us up with a bunch of really cool LED lighting. For the rear of the car we installed LED tail lights. These were unique in that they come as a whole lens assembly that’s replaces the factory lens. The LEDs are weather-sealed in the new lens so we simply had to pop them in and plug ‘em into the factory bulb sockets. United Pacific even gave us a sweet module that will even give the system sequential lights. Up front we replaced the antiquated sealed beam headlights with some new United Pacific Halogen lights that will better light up those dark highways in our future.

We also finished up installing the Clayton Machine Works billet gas pedal and tying it into the Holley linkage on our throttle body. The pedal assembly is a work art, so we almost feel bad mashing it with our foot… almost.

The rest of the day was hunting down sensors, adaptor fittings, and radiator hoses just like any other build. We also went and picked up the custom-built 3.5-inch aluminum driveshaft from Inland Empire Driveline. So, parts are still arriving and the “to do” list is getting shorter, but there’s a ton left to get done, so it will most likely be a late night. If things go right we’ll be able to finish installing our Hooker Blackheart 2.5-inch stainless exhaust system, which is one of our last big parts to install. Then it will be an all-day thrash tomorrow to the finish line of our Week To Wicked project!

Also, in breaking news, for the first time ever we will be selling Week To Wicked T-Shirts, with the very cool rendering. If you’re interested click on over to www.shophotrod.com for more info.

If you’re behind on the Super Chevy Week To Wicked Presented by CPP project then be sure to click on some of the prior stories below to get caught up and follow along as we try to turn a weak Camaro into something far wickeder in one very short week.

More on our Week to Wicked 1972 Camaro Build!

Super Chevy is once again taking a boring and nearly stock Chevy muscle car and transforming it in one week from blah to wicked! This time it’s an unfinished and stalled-out 1972 Camaro.

» Read More
Week To Wicked Day 5: Finishing up and Firing up our week long project, complete with smoky burnouts!