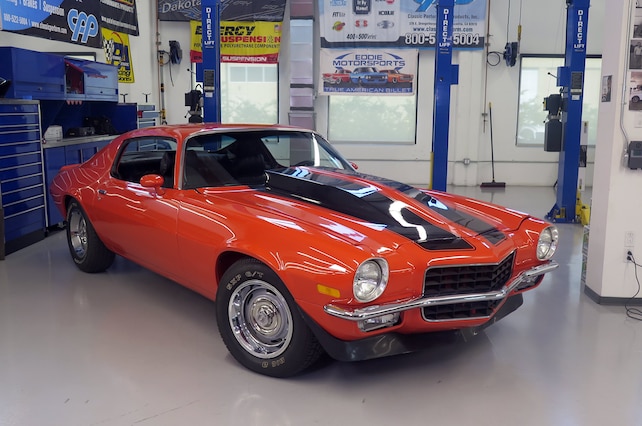 If you took a survey of hot rodders you would most likely find that stalled-out and unfinished project cars are nearly as common as finished ones. The last time the Super Chevy team tackled a Week To Wicked project it was our restored and driving 1967 Chevelle. Well, this time we came across something totally different for the Super Chevy Week To Wicked Presented by CPP.

What we found was a 1972 Camaro that someone had sunk a ton of time into, but ultimately never got anywhere near finished. The body looked great, the paint was driver quality, but it was missing a ton of parts and many of the parts it did have were in boxes and not installed. After looking it over, we figured it would be a good candidate to work over and get ripping down the highway.

Of course, we wanted to start with a running, driving car, so part of this challenge was getting the car to a “stock” (I should use the “ish” deal here) appearance. So we ditched the awful tall-and-skinny wheels in favor of some rally wheels and dropped in a small-block we had hanging out in our tech center. We also needed to install some of the missing and boxed interior parts and do something about the sight-restricting and poorly fitting four-inch fiberglass hood. The previous owner wasn’t going for a restoration since he had smoothed the firewall and color matched it, along with the inner wheel tubs, to the car’s Hugger Orange hue. Maybe his dream was for a pro-touring build, if so we think he’s going to be happy with what we have in mind.

So we had a car, a plan, and seven days to transform the car. In the past, almost everything we’ve done has consisted of bolt on parts, but this time around we decided to dive in a bit deeper and widen the rear wheel tubs to accommodate some wider 315/30/18 RT-615K Falken rollers wrapped around some two-piece American Legend wheels. The downside to doing this is that it’s a messy job and one that makes it virtually impossible to work on the rest of the car, so we decided to spend one of our seven days early and get the wheel tubs down. This will leave us with 6 days to transform the rest of the car. Some might call it cheating, we call it time management. Either way, the clock is ticking for the tub widening. It will pause for a couple of weeks and start again when the main build starts on March 27th. Our goal is the get the Camaro done on Friday the 31st so we can take it on a shakedown cruise along the coast, maybe even down to the Goodguys show in Del Mar, California. But our real end game is to drive the revamped Camaro to the Holley LS Fest West in Las Vegas and run it hard thought their full gauntlet of driving events.

The other item we are working on before the build starts is the engine. In the past, the whole deal came from one source, but this time there’s a few players involved. The engine, a Chevrolet Performance LS376 515hp mill, is coming via Scoggin-Dickey Parts Center (SDPC). Think of it as an LS3 Chevrolet Performance crate engine with a healthy cam. To make it run we’re adding a slew of parts from Holley including a single plane intake and their Terminator Stealth EFI system. The EFI kit is pretty cool as the throttle body looks like a traditional Holley double-pumper carb (hence the stealth label). We’re also running their oil pan and a pair of Hooker LS swap headers. To dress up the LS we’re adding a set of their black valve covers and a finned valley cover. Lastly, E3 is providing plugs, wires, and their new LS coil packs. To make sure everything is happy together, and find out what the combo makes, we’re wrenching it all together and hauling the engine down to Westech Performance for some quality time on their Superflow 902 dyno. Backing up the worked-over LS will be a 4L75e trans from Performance Automatic.

Other parts on the “to install” list include a Dakota Digital dash, Procar by SCAT seats, United Pacific LED lighting, Ididit tilt steering column, Hooker exhaust, Earls plumbing, Eddie Motorsports billet widgets and engine drive system, Energy Suspension bushings, and, because someone double-dog dared us, a full NOS nitrous system. Like last time, the crew from Classic Performance Products (CPP) will be tackling the brakes, steering, suspension, and the aforementioned wheel tubs. CPP is also hooking us up with a custom CPP 9-inch rearend sized perfectly to accommodate our wider rear Falken rubber. The Camaro will also be getting a complete rewiring by Painless Performance. It’s a lot of stuff to get done in a week.

Between now and when the full build starts on March 27th, we’ll be sure to keep you up to date with social media postings, teaser videos, and some Facebook live posts. So follow along as we turn a failed Camaro project into something a bit more wicked.

Week To Wicked: We Completely Transform a Stock 1967 Chevelle in a Short Five Days

Super Chevy is once again taking a boring and nearly stock Chevy muscle car and transforming it in one week from blah to wicked! This time it’s an unfinished and stalled-out 1972 Camaro.

» Read More
Week To Wicked Day 5: Finishing up and Firing up our week long project, complete with smoky burnouts!