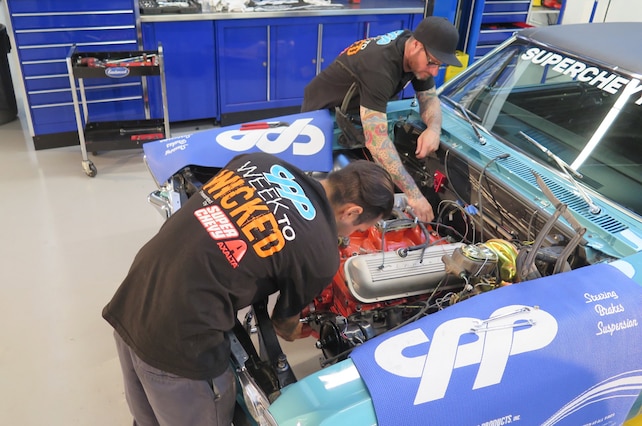 Time flies when you’re having fun – also when you only have a week to build a car. That being said, the team of diehard gearheads here in Super Chevy’s Santa Ana tech center is making killer progress on the CPP Week to Wicked ’67 Chevelle build, presented by Super Chevy and Axalta. We’ve been at it for about 5 hours now and the car is almost completely disassembled.

That small pile of parts in the corner of the shop has rapidly expanded into mountain-like stature. The powertrain is out, the suspension is dropped and the Chevelle is sitting, hovercraft-like on the lift. Next up for day one of the build, is to lift the car off the subframe and replace the doughy, stock, rubber body bushings with a set of Energy Suspension’s uprated polyurethane mounts.

We have a long road ahead of us, and an extremely tight timeline, before this Chevelle is roadworthy again; but knock on wood; we’ll start reassembly tomorrow. That will begin with a completely new, and thoroughly modified, suspension from CPP, which will be the heart and soul of the car’s newfound handling prowess.

Stay tuned on Facebook and SuperChevy.com as the clock runs down and we continue on our path to Pro Touring-awesomeness on this Chevelle.