Video: How to Install an LS in a 1967 Chevelle, Week to Wicked 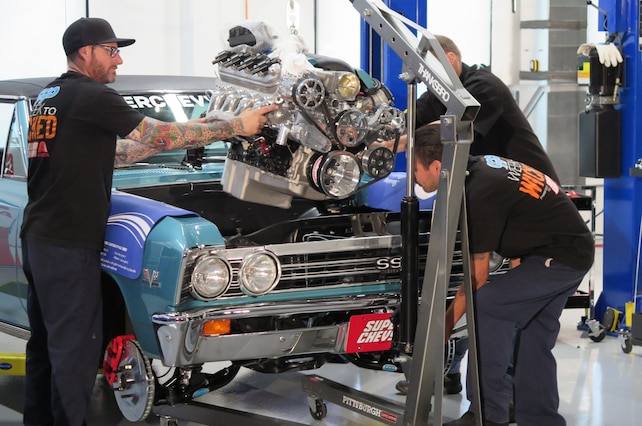 It’s finally horsepower time on the CPP Week to Wicked build, presented by Super Chevy and Axalta. The suspension is 100 percent complete and we’ve dropped the 615-horsepower BluePrint engines LS3-based 427 stroker in between the Chevelle’s front fenders.

The engine is shod with CPP adjustable motor mounts which provide considerable adjustment of the motor fore and aft. This will help us arrange the engine to clear all of the other components in the engine bay, such as the electric cooling fan. We are also using CPP’s engine pedestals, which replaced the original big block pedestals, and Energy Suspension engine mounts. Funneling exhaust out of the engine is a set of CPP LS manifolds. These flow really well and also provide valuable clearance and ease of installation.

One thing we’re really digging on the motor are the custom fuel rail covers, which were done by Willie Davis of Big Willies Garage. Axalta supplied the Emerald Turquoise paint to perfectly match them to the body and Davis airbrushed BluePrint’s logo and the iconic “427” cubic inch onto them perfectly.

Slipping the engine into its new home was easy since the car is still partially stripped down, but now it’s time to attach all of the components to make the beast roar, such as the wiring, fuel system, cooling, air inlet and a few more things. Tech center manager Jason Scudellari is putting his fab skills to work, already building brackets to mount the computer and engine power control center (the fuse-block included with the BluePrint LS427 engine) into the fender of the car.

We have only a few days left to get this engine fired and prove that our one-week-built Pro Touring car can tackle a 1,000-mile road trip.