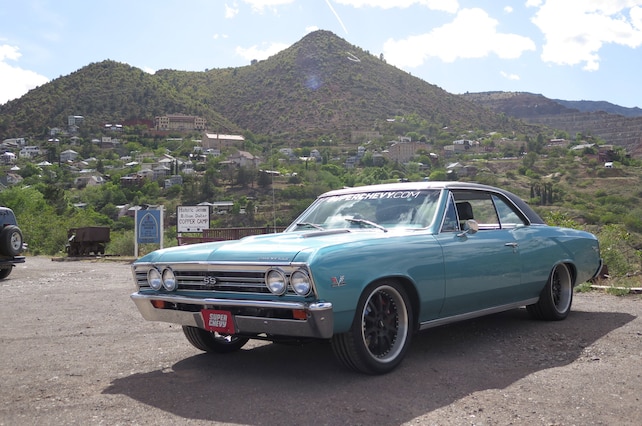 It was 5:00PM under a cloudy sky when we rolled off the chassis dyno at Westech Performance and pointed the nose of the Week to Wicked Chevelle eastward toward Phoenix, Arizona. Thanks to Eric Rhee’s tune, the Chevelle ran like a new car. It idled smoothly in gear, started quicker when hot and the throttle response was cleaned up. It is an absolute animal.

We noticed the car was sagging in the back and there was some driveshaft rubbing over road undulations so we put another inch in the rear coilovers after the dyno was done. It was no mystery why the Chevelle was dragging its butt: The 90-pounds of fuel, 375-pounds of people, and 200-pounds of gear were taking their toll.

With the car riding level, we set off. And, not but 10 minutes after we hit the road, Mother Nature rewarded our newfound horsepower with a downpour that followed us on the highway for almost 3 hours of the journey. Before CPP Week to Wicked presented by Super Chevy and Axalta, driving the Chevelle in the rain would have been a white-knuckle affair. Not only did the new CPP Pro Touring suspension and Viking Shocks keep the car firmly planted on the soaked road, the brakes offered a huge measure of confidence and the Falken tires shed oncoming water like champions.

It was midnight when we pulled up at the hotel in Phoenix, exhausted but thrilled the car had run so well.

The next morning we cruised over to Hot Rods by Dean to have his talented crew of builders give the car a once over before we hit the open road, yet again. We found a few minor issues such as a wire loom for the O2 sensor that was intermittently bumping the exhaust pipe and needed to be zip-tied out of the way. The biggest issue we caught was that one of the vent hoses for the fuel tank was too large of tubing and worked its way off the hose barb. It was an easy fix, but it made for an embarrassing fill-up at the gas station. Oops. But honestly, for a car built in 7 days, this thing is stout!

After checking the fluid in the BluePrint 427 LS and Flex-a-lite radiator, Drew from Hot Rods by Dean rolled down the garage bay door, dimmed the lights and helped us align the headlights. He asked if we were hunting satellites. We weren’t, but that did explain the not-so-friendly hand gestures from a few of the semi-truck driver’s on interstate 10.

We thanked the guys at Dean’s and hopped back onto the 17 North toward Jerome, a cool, old ghost town nestled in the mountains. Naturally, we picked a route rife with twists and turns to test out the new CPP suspension. We’ll have more updates for you at the next stop, so stay tuned for more news from the road on our 1,000-mile Week to Wicked road trip.