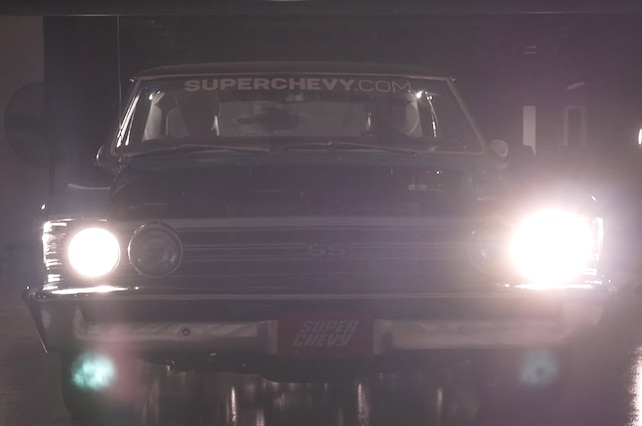 Day five at the CPP Week to Wicked build, presented by Super Chevy and Axalta, was every bit the late-night grind we thought it would be. We installed the dash, steering column, and wheel in the car in early morning, but there was still a lot on the plate for the day. Buttoning up the little things on a car is always one of the most time consuming parts of any build, and inevitably, when you change as many components as we did, gremlins begin to rear their ugly little heads. Did that stop us? No way.

We pushed on, taking 3 steps forward and 1 step back toward first startup – hey, that’s still progress. Despite a faulty wire in the ignition hot lead, we were able to bust out the soddering iron, route voltage to the proper pin of the GM computer and coerce our BluePrint LS427 crate engine into making sweet, sweet music.

Things got goofier as the night drew on and the team got increasingly tired, but we put our heads down and had the Chevelle running and driving at 11:00 pm. On day 4, we made a promise of a burnout to come. On day 5, we delivered. Check out the daily recap video to watch the AMD Chevelle light the hydes like only a 600-horsepower muscle car can.

We still have Saturday and Sunday on the clock to get the car ready for its thousand mile road trip through the Arizona desert, but getting it running and driving on day five was a huge success.

Stay tuned for more updates as we get the car prepped for its journey and also updates from the road trip.