The car looks absolutely killer sitting on the ground 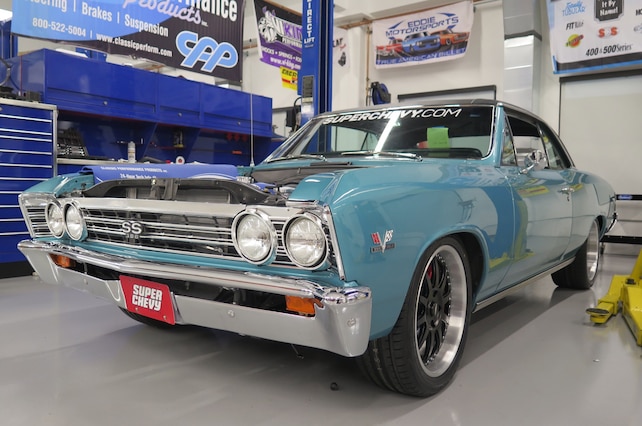 The CPP Week to Wicked Chevelle build, presented by Super Chevy and Axalta is becoming a race against the clock as we push to get the car together in time for our impending 1,000-mile road trip. We’ve completed three days of the build and are quickly running out of time to get the car running and driving. We definitely got a lot of wrenching done today and the car is finally sitting on its Falken tires and American Legend wheels.

One of the biggest milestones for the day was finishing off the driveline. The BluePrint LS 427 engine, which has a polished Eddie Motorsports S-drive pulley system up front, was connected to the Performance Automatic Platinum 4L80E transmission and linked to the freshened 12-bolt via a Driveshaft Shop driveshaft. We also finished off the cooling system with a Flex-a-lite radiator and massive electric fan.

The car looks absolutely killer sitting on the ground, and the stance from the CPP Stage III Pro Touring Suspension and Viking coilovers is dead on! It would be easy to waste time just staring at it, but we still have our work cut out for us. Tomorrow we have a huge laundry list of parts to tackle, such as plumbing, wiring, exhaust, gauges, and a lot more.

Check out the video from today and stay tuned on Facebook and SuperChevy.com. Don’t miss a minute of the build as the clock runs down. There are only a few days left before we hit the road for Arizona. Can we do it?