We find out that it’s the little things that count as we try to wrap up our 1967 Chevelle rebuild. 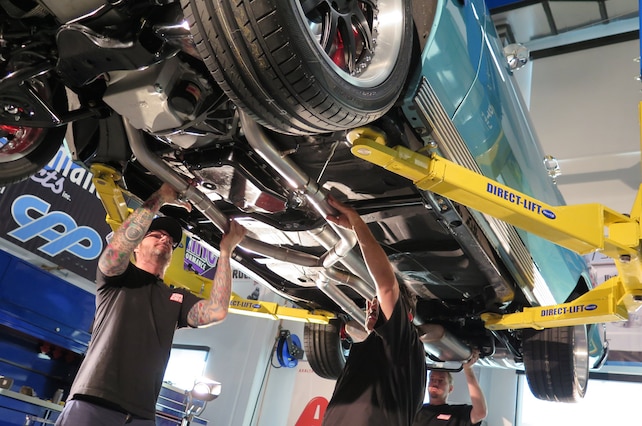 Day five at the CPP Week to Wicked build, presented by Super Chevy and Axalta, has been a grind. After working till nearly midnight on day four, the electrical seemed done by mid-morning on day 5, so the team started knocking out the long list of “little things” that still needed to be done. The BluePrint engine was filled with oil, the Performance Automatic 4L80e trans was topped off with fluid, power steering fluid filled the Eddie Motorsports reservoir, and the Flex-a-lite radiator received the best water we could find. We couldn’t fit the trans dipstick tube into the trans with it in the car, so we ran down to the local speed shop and bought a flexible Lokar tube and dipstick. The dash was also reinstalled in the car with the new Dakota Digital dash in place.

After the CPP crew set the rear pinion angle we went about installing the new exhaust system. Luckily for us CPP has their own 1967 Chevelle shop car running an LS engine and the same exhaust manifolds. To save time we had Lee over at Muffler Man in Placentia, California stich us together a complete system using the CPP Chevelle as a template. This saved us a ton of time and the new exhaust fit perfectly.

At 5pm we hit the ignition and… nothing. For some reason the ECU wasn’t triggering the fuel pump, so the crew broke out the diagnostic tools and started tracking down the issue. We found the ECU wasn’t getting an ignition hot signal so now the hunt is on for a break in the wire from the ignition. We’re close, but until it fires our Chevelle is a just a really heavy static art project. Tune in tonight for more updates on our project, it might end up being another all-nighter.