The fate and nature of project cars 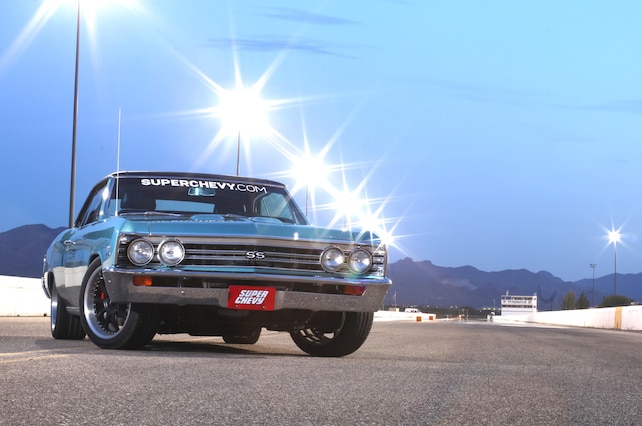 Driving a 1967 Chevelle that was built in a week across the Arizona desert has been a huge adventure. One devoid of sleep, but packed with excitement and memories I’ll take with me to the grave. My co-pilot John and I made it across almost 800-miles of highway, desert scape and twisty canyon roads, stopping often to take in the sights, local cuisine, and restock our supply of caffeinated beverages.

Last night, we arrived at Tucson Dragway for what was supposed to be our last stop before embarking on our drive back to our California headquarters the following day. By the time we pulled up, the awesome crew here had the track prepped and ready to handle every ounce of power we could throw at it. Not wasting anytime, we dusted the Chevelle off, took some shots of it on the big end of the track and unloaded the pounds of camping equipment, camera gear and tools.

I staged the car without a burnout and made a half throttle pass down the track just to make sure all was well. The tree dropped, the green bulb illuminated, and the Chevelle powered down the track. It was easy to tell how much more was lurking in the pedal. The car felt good, completely at home on the track and since all the gauges read happy and the fluids were topped off, I rolled it into the burnout box and lit the hydes.

I brought the car up on the converter and when the tree dropped, I sidestepped the brake and the car hooked, hard! First gear was gone in the blink of an eye, but as the car found second, something caught my eye on the Dakota Digital dash. “Low Oil Pressure,” flashed angrily on the digital read out. I clicked off the engine and coasted down to the return road. Something was wrong.

A mechanical gauge was attached to the engine which verified that we weren’t just looking at an electrical gremlin. Something wasn’t right and rather than risk damaging the engine, we decided it was best to park the car for the night and attack it in the morning.

Morning came and with the help of Nate Burger, the guy behind the Tucson Performance and Race Shop, we hoisted the car in the air and drained the oil. There were some shavings in it, while not big enough to get an old-timey prospector excited, were enough to cause concern. It was clear that our journey would end at 794 miles, and not the 1,000-plus that we had hoped to accomplish.

While this was a hard hit, having come so far with the car during the Week to Wicked build, such is fate and the nature of project cars. We knew building a car in 5 days would be hard. Turns out. It’s harder than we thought. But don’t worry; we’ll be back to make the pass this car deserves.