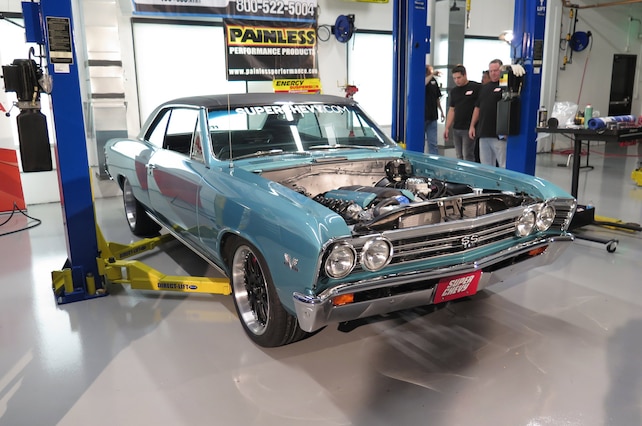 As day three wraps up at the CPP Week to Wicked build, presented by Super Chevy and Axalta, our 1967 Chevelle project is finally a roller with a complete suspension and drivetrain! Of course we still have a long punch list to address, but we are certainly on the downhill slope of the project and picking up steam.

Today’s priority was finishing the drivetrain and figuring out items like the radiator hoses and various other details. The Performance Automatic 4L80E went in with only one minor hiccup; we didn’t have the right (i.e., long enough) flexplate bolts to fit the crank spacer used in the kit. A quick trip to Guarantee Chevrolet in Tustin, CA, netted us a the correct GM flexplate (an offset unit from a 2500 truck that would have come with a 4L80E) which got us rolling along again. Other than that, the build has been going surprisingly well, will only minor bumps and minimal blood.

The cooling system was dropped in place and is centered around a Flex-a-lite radiator and fan combination. At one point we thought we were going to have to make a custom upper radiator hose, but the team lucked out when one of the oddly shaped ones we had on hand fit perfectly. This saved us a couple of valuable hours.

The custom three-piece wheels showed up from American Legend and, after having them mounted to the Falken tires, we were able to get them installed and get our Chevelle rolling in the shop for the first time this week. Having the car clear of the lift will let our wiring guru from Painless Performance get inside and start the process of wiring the Chevy. Overall we’re in a really good spot and, knock on wood, we should be able to fire up the Chevelle by the end of the week.