Day 2 – CPP Suspension Installation! Our 1967 Chevelle gets a big boost in handling thanks to a CPP Pro-Touring Level Three kit 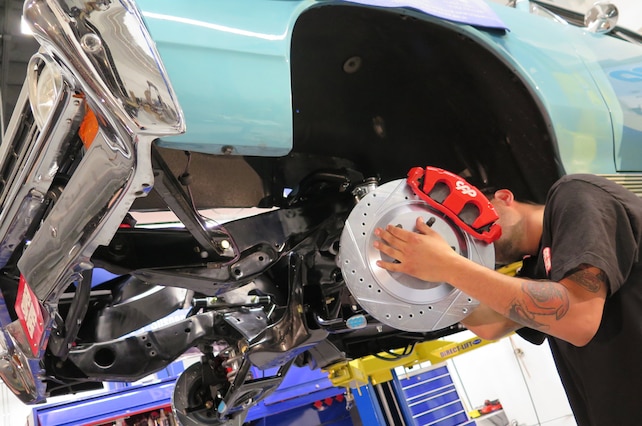 We’re halfway through day 2 of CPP Week To Wicked, presented by Super Chevy and Axalta, and we’re actually ahead of schedule. First up this AM was bolting on all the Classic Performance Products (CPP) suspension widgets under our 1967 AMD Chevelle. As expected, everything progressed smoothly with the only surprise being that our 12-bolt had C-clip eliminators, necessitating a run to the hardware store for longer bolts. Other than that, it was a completely bolt-together and drama-free exercise. Before tackling the CPP suspension parts, we swapped out the rubber frame bushings with polyurethane pieces from Energy Suspension. We did this one-by-one, using a pole jack and the whole process took less than half an hour.

The front suspension was converted to coilovers using Viking double-adjustable shocks and conical-shaped front springs. This design lets the CPP spring utilize the upper spring pocket and then tapers down to fit the adjustment ring on the Viking shock. It’s the easiest way to get coilovers under a classic Chevy. The front brake system showed up fully assembled and mounted to the AFX spindle and C5 Corvette sealed bearing hub, which save a ton of time. The tech crew also wrenched together the new steering components which are all tied into a CPP 500 close ratio (13.7:1) steering box.

The rear was out of the Chevelle, so that made pressing in the new upper control arm bushings much easier. The CPP team also worked out the C-clip eliminators and figured out which shims they would need to center the single-piston calipers over the zinc-washed 12-inch rotors. To get us in the ballpark they also adjusted the upper control arms to be the same length as the stock stamped-steel arms we removed. Other tasks included installing the rear bump stops, bolting on the new rear CPP brake lines, and installing the lower brackets that will hold the rear coilover shock. The sway bar which will be used has three adjustment points which will allow for tuning at the track. After lunch we’ll finish up the CPP suspension install and dive into dropping the BluePrint 427 LS3 between the fenders. Look for updates throughout the day!