Through pizza and perseverance, we will prevail! 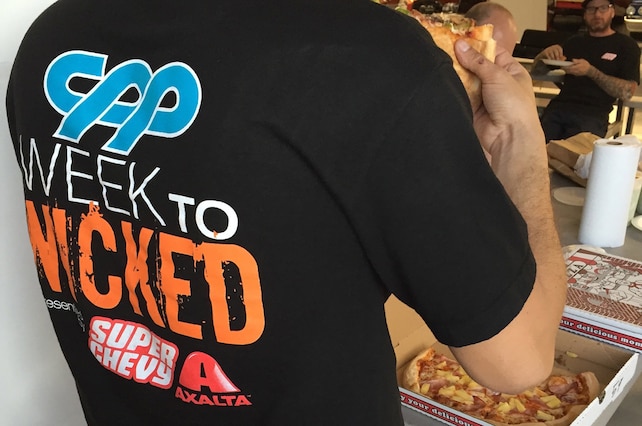 The CPP Week to Wicked build, presented by Super Chevy and Axalta is on its final build day. That means 24 hours left to take what was essentially a stock, restored car and finish converting it into an LS-powered Pro Touring machine. Last night was a late one, wiring; but save for a few more splices under the car, the electrical system is finished. Today, we still need to get the interior back in the car, add an exhaust, reinstall the hood; with a set of Eddie Motorsports billet hood hinges, add fluids to the car, and button up a myriad of other laundry-list items. The clock seems to be moving artificially fast, but we’re as focused and motivated as ever. We’ve had a lot of requests for a burnout, and hopefully at some point today, we’ll be ready to oblige!

If you’re a new Super Chevy reader, you may not know the entire history of this car. The 1967 Chevelle you see before you isn’t a numbers matching piece of history we decided to cannibalize in the name of horsepower. It was actually a rusted out hulk of a car that was saved from the scrapper by the installation team at Auto Metal Direct (AMD). All that was salvaged from the original sheetmetal was a firewall and an exoskeleton. AMD re-skinned the entire car with their top-shelf reproduction sheetmetal. The laser-straight, Axalta-paint-covered body panels, and perfect body gaps are all clues to AMDs skilled handiwork.

The big block we pulled out in favor of the BluePrint LS427 crate also wasn’t a numbers matching mill. It was a later engine that had been making some questionable noises ever since the car was road-tripped from Florida. That engine is making its way over to our sister mag, Street Rodder, where it will get a full refresh and a new lease on life; just like the Chevelle it came out of.

Check out what happened in this video recap of day 4 of the build and don’t miss any of today’s thrash-fest at SuperChevy.com for a full recap video later tonight. Don’t miss a minute of the build as the clock runs down. There are only a few days left before we hit the road for Arizona. Can we do it?