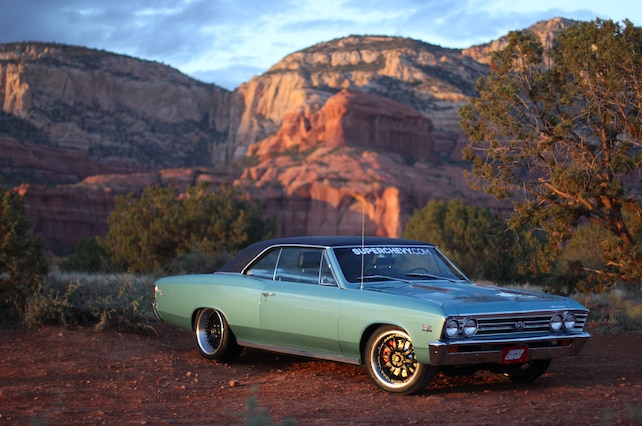 What better way to prove the reliability of the Week to Wicked Chevelle then turning the wheels onto the dirt and heading out on an epic adventure drive into the Arizona desert? That is exactly what we are doing.

Are we crazy to take a Pro Touring muscle car across washboard road, rocks, and some of the meanest cactus that’s ever poked me? Yes, we probably are. But, that doesn’t make it any less awesome.

After cruising down the mountain roads from Jerome, Arizona, where the new suspension had my co-pilot, John, and I grinning from ear-to-ear, we hit Sedona where we will be camping. We dialed the Viking shocks to full soft, made sure the air filter was still nice and tight and turned onto the red, Arizonian soil.

If you had asked me yesterday how the car would handle off road, I would have guessed it’d ride like a cement mixer. Today, I can honestly say it isn’t that bad. With the shocks dialed back, I didn’t lose any fillings, or shake anything important loose from the car. I don’t think CPP is ever going to advocate their Pro Touring suspensions for the hardcore camping/off-roading market – but they totally could.

About 10-miles into the portrait-esque desert landscape, we found a nice turnout to park the car and setup camp. A 6-person Coleman tent will be our home for the night. We unloaded a couple bundles of firewood we picked up on the way and built a healthy campfire. Hot dogs are hanging over the fire and will promptly be consumed. It is a surreal feeling writing this; sitting on a folding chair, the Chevelle bathed in campfire light while the setting sun illuminates the towering red mountains on the horizon with its last fading rays. Today was a good day.