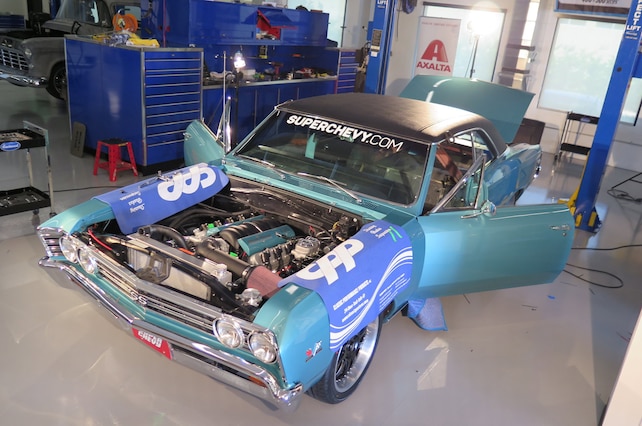 The punch list for CPP Week to Wicked presented by Super Chevy and Axalta is getting down to the last few odds and ends as the build crew hustles to complete Super Chevy’s 1967 Chevelle in time to get its motor running and head out on the highway for a rowdy weeklong road trip. But first, before the road crew gets to pass through Blythe and dodge the California Fruit Police (no kidding California really does have Fruit Police stationed at the California –Arizona border) the interior in the 1967 Chevy SS396 has to be installed. Early this morning with strong coffee at the ready, it was time to rehang the dashboard, now fitted with a Dakota Digital gauge cluster.

After the final connections were made for the Painless Performance wiring harness, the next step was to hang the dash. After the dash was back in place, only now with a lot more muscular look, it was time for the installation of the tilt steering column by the CPP team. Once the column was bolted in place, the teams set to work installing the shift linkage to the Performance Automatic 4L80E Transmission.

The crew is now crawling around under the car hanging the exhaust, which was fabbed up by Muffler Man in Placentia, CA.

There is still a lot to do before the car makes noise or drives, but stay tuned for updates as the action plays out.

How can you follow along from home? The entire event will be covered on SuperChevy.com via daily video and story updates, as well as on all of our social media sites such as Facebook, Twitter, and Instagram. Stay tuned for what is sure to be one heck of a wild ride!