With the dyno complete, we’re ready to hit the open road! Watch the dyno here. 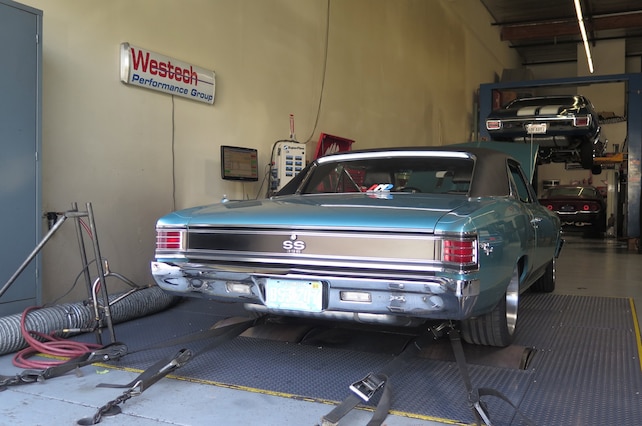 It was early in the AM when we pulled out of the Super Chevy Tech Center, eastward-bound, and on a mission to dyno tune the Week to Wicked Chevelle as the first leg of our 1,000 mile road trip. We made it about 200-feet before the car sputtered, died, and rolled to a stop. There was a brief aura of disappointment that was gone no sooner than it arrived, and we immediately pushed the car back to its starting point to figure out the next step toward getting back on the road.

We knew from previously checking the plugs that the car was running really, really rich so we rolled it back into the garage and put a fuel pressure gauge on the fuel rail. What should have been 60 psi, the pressure the BluePrint Engines 427 was tuned at, read more like 150 psi-ish. We say “ish” because the gauge doesn’t read that high and it actually spun all the way around when the fuel pump came on. It was easy to see why the engine was loading up so bad. We found the culprit, a busted stock-style fuel pressure regulator. We tossed the car up on the lift where an adjustable Aeromotive regulator was spliced in place of the existing unit.

We hit the ignition key and the car roared to life. The fuel pressure was set at 60 psi and we were back on the road, albeit a few hours behind schedule, to Westech Performance for the car’s dyno tune.

The trip here went smooth. The engine ran well, the Performance Automatic dutifully shifted through all four gears, and the CPP suspension/steering and Viking Shocks tracked supplely and straight down the highway. The CPP brakes are worlds better than the factory setup, requiring little pedal effort to hunker the car down from speed. We did notice a slight rubbing from the driveshaft on the floor pan over road dips, so we’ll have to crawl under the car and raise the ride on the Viking shocks. We suspect this is from the 250-pounds of luggage and camera gear in the trunk and the 375 pounds of dudes onboard. It’s an easy fix and we can lower the car back to its original sexy stance when we get home.

We made it to Westech unscathed, and after the car was strapped down on the rollers, Eric Rhee got to work on the tune. Working his keyboard like Jimmy Hendrix worked an upside down guitar, Eric masterfully perfected the tune for our specific application and to optimize the engine’s peak power.

After some tuning time, the car spun the dyno to 450 horsepower and 423 pound feet of torque. And, with the dyno complete, we’re ready to hit the open road. Only 6 hours to Phoenix!