Newsletter
Sign Up today for our FREE Newsletter and get the latest articles and news delivered right to your inbox.
Home
Chevy High-Performance
How To
Project Cars 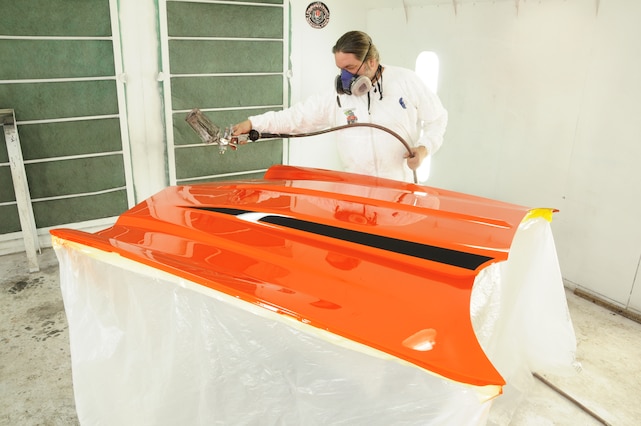 When taking on a complete build from the ground up, one of the best steps you can take is to have an automotive artist take your ideas and synthesize them into a rendering; especially if the build with take a few years to complete. This will give you an exact visual template to study as you move forward. Of course, you always have the opportunity to fine-tune all the elements should you decide to pursue a different wheel and tire combination, vary the paint scheme, or even update with some custom fabrication.

Editor Licata worked his vision through the talented pens of well-known automotive designer Ben Hermance to nail down the ideas for Project Orange Krate in the most finite details, including stance, balance, and wheel and tire combination. From there the car was shipped to Peter Newell at Competition Specialties in Walpole, Massachusetts, to take on bringing the build to life. Along the way (this series, started in the now-defunct pages of Camaro Performers magazine) Newell flexed his creative skills as a builder by infusing plenty of additional badass attitude into the mix of the original rendering.

Many times it’s the small details that give your car a signature, as evidenced by the choice of striping Hermance added when he designed the car’s paint scheme. Subtle, yet well balanced, they set the car apart from the rest to give it plenty of allure. It takes time to execute these small details as Newell tells us, and proper surface preparation is one of the most important facets in creating a final product you’ll be proud of for years to come. It also helps to have a mix-master of a paint guru who can bring his special voodoo to the table with one-off colors. For this we called on our pal Ray Williams of Sherwin-Williams Automotive Finishes to dig deep into his bag of tricks to come up with the sparkle needed to complete the look.

It won’t be long till Orange Krate is out making noise and you know you’ll see it here first! Stay tuned.

01. To properly prepare the panel, Peter Newell of Competition Specialties first made sure the hood was free of any debris by blowing the surface clean.

02. Newell then applied Prep-sol to a clean cloth and worked it across the entire surface to be sure any contaminants, including skin oil, were properly removed. Taking the time to prepare the paint surface is paramount to an exceptional outcome.

03. A great tip Newell gave us was to add just a hint of dishwashing liquid to the water in the bucket for wet sanding. This adds a bit of slickness to the panel surface and also cleans it as you go. For this application, 500-grit sandpaper was used, seen here soaking in the bucket to soften the paper a bit before use.

04. Different styles of flexible sanding blocks are perfect for a nice flat and even cut to the surface when wet-sanding. They also allow you to work contoured areas with ease.

05. Making sure to keep the panel surface very wet, Newell worked his way over the hood using the 500-grit paper across the surface to maintain the right sanding consistency.

06. With the paper removed, the backside of the flexible sanding block was used to squeegee the water and sanding sludge clear from the surface. This allows for the surface to be inspected for flatness. This step takes time to achieve a perfect surface finish.

07. Here is the hood after being completely wet-sanded with 500-grit paper. The surface is nice and even at this point, ready for the next step.

08. To prepare the hood for striping, 2-inch masking tape was used to back-tape to protect the finished underhood paint from any overspray.

11. Newell then followed with a razor, carefully trimming away the top portion of the plastic to reveal the prepared surface.

12. Working with 3M 1/4-inch blue fine-line masking tape, Newell anchors the tape for the first pull to establish the baseline of the stripe to the cowl hood.

13. The line is masterfully set into place, laying the groundwork for the rest to follow. Take your time as this needs to be a perfectly straight line.

14. Having previously completed the stripe outline on the other side of the hood, and to maintain consistency from side to side, Newell takes a measurement from the stripe’s tip to the front edge of the hood.

15. To perfectly replicate the balance of the stripe from side to side, a marker of fine-line tape was set onto the hood surface to mark the stripe’s tip, as shop dog Thor looks on.

16. With the marker in place, Newell was able to pull an exact line to maintain the flow from side to side.

17. Moving to the rear of the hood, the tie-in was set in place, completing the outline for the stripe.

18. Here you can see the final design, mirroring the original Hermance art rendering. It’s a lot of work, but the final product will be something that separates Orange Krate from the pack.

19. The hood surface was then covered in paper to prepare for the final painting process. Newell carefully used a razor to trim the area where the stripe will be applied.

20. Newell then used 2-inch masking tape to seal the paper to the hood while carefully following the design layout of the stripe.

21. Here you can see the completed stripe area ready for paint.

22. Newell loaded his spray gun with a custom-blended Sherwin-Williams Planet Color hue by Ray Williams called Midnight Lightning Pearl and began to lay down the vibe by covering the surface with a number of light coats.

23. Once the color coat was sufficiently dry, the stripe was unmasked and the fine-line tape was carefully pulled away from the surface.

24. The stripe was then lightly wet-sanded with 2,000-grit to prepare for the final step. This is also where the stripe edges were gently sanded to soften them.

25. A 3M tack cloth was then used for final surface preparation to be sure the panel was free of dust and debris.

26. Newell then laid down a number of coats of clear to complete the process.

27. The completed hood added the final icing to the details on Project Orange Krate, thus bringing the Hermance design to life.