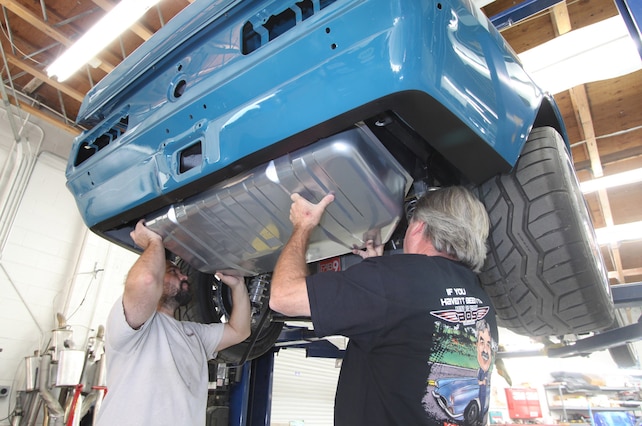 A Chevy is made up of many parts. Some fall into the category of optional while others are quite mandatory. And, of the mandatory items, many of the less glamorous ones can be done in a “just good enough to get buy” way. Guys spend a ton on wheels and engines, but sometimes skimp on the bits that aren’t drooled over at the local cruise spot. Gas tanks often—and unfortunately—fall into this category, especially when dealing with electronic fuel injection (EFI) applications. If we had a buck for every time we’ve seen an LS-swapped ride with a stock tank we would have enough money to … well, buy a really nice tank.

Yeah, you can suck fuel to feed your EFI engines from a stock tank, but start turning corners, especially with not all that much juice in the tank, and that fuel-injected mill under the hood will start throwing a fit. You see, EFI engines require a steady flow of high-pressure (relative to a carburetor) fuel. When the pickup becomes uncovered, such as when going around a hard corner, a big slug of air is sent upstream. Besides just running badly, they can run lean, which can cause much bigger problems down the line.

OK, so the plan with any EFI install, and that includes traditional small-blocks with aftermarket EFI kits, should be to add a properly baffled gas tank. For a long time that meant dropping big bucks on a stainless tank or breaking out a lot of tools—welders included—and modding a stock tank. One way was expensive and the other one hard. But today there’s another option: aftermarket stamped-steel baffled tanks. Yep, all the internal updates to make your EFI engine purr at a price that will make your wallet do a happy dance; that is if wallets could dance.

Our 1968 Camaro project is getting ever closer to receiving its LS powerplant and that engine is going to want a steady, uninterrupted stream of petrol. We considered the more expensive custom tank options, but luckily the folks over at Tanks, Inc. came up with a better solution. They have EFI tanks ready to rock for just over $300. And, while they have tanks the same exact size as factory, what really got our attention were their new notched tanks. Here’s the deal, when Chevys are mini-tubbed it eats up valuable real estate under the car, making the exhaust even harder to run. But, by lopping off the corners of the tank, room is freed up for the exhaust piping. Of course, that would cause a loss of tank volume, so Tanks, Inc. made their tank about an inch deeper. Problem solved. Now, we will agree that the fancy stainless tank looks a bit nicer, but the powdercoated steel tank from Tanks Inc. looks great and all the extra cash in our pocket makes it look even better. So follow along as we get Project Track Rat one step closer to hitting the road.

1. While it may somewhat resemble a stock Chevy tank, the Tanks, Inc. product is a whole other animal. The tank is made from coated galvanized steel, which is then powdercoated silver, but it’s the inside that makes it so great for fuel-injected cars.

2. The newest offering from Tanks, Inc. is this notched version (PN TM32AN-T). The corners have been lopped off, making the front of the tank just 27 inches across. This change makes it much easier to run a wide, 345mm tire along with a 3-inch exhaust system. To regain the lost volume, the tank is 1-inch deeper than stock. To be honest, even on a non-mini-tubbed car, it’s nice to have the extra room for exhaust.

3. What makes it perfect for EFI applications is the extensive use of internal baffling and the extra-large 4.3-liter internal fuel tray. The design goes a long way toward preventing fuel starvation during hard cornering. (Photo courtesy of Tanks, Inc.)

4. After measuring the depth of the tank, we prepared for shortening the 0-90-ohm fuel sending unit (PN TAN-GML).

5. After taking off the sending unit brace, we cut off the excess with a cutoff wheel. Remember, it’s better to make it too long and have to cut it again than to cut it too short and be stuck.

6. We then followed the instructions to determine how much needed to be trimmed off of the float rod. Due to the internal baffling, the float went in pointed roughly toward the driver’s seat.

7. We then slid the assembled sending unit into the tank. Keep in mind that although there are five holes in the top, they are not evenly spaced (two of them farther apart). This means they are clocked and there’s only one way the sending unit can mount to the tank.

8. Even though the screws came with rubber seal washers, we opted to give the threads a tiny dab of white Teflon thread sealant.

9. With that done, we finished securing the sending unit.

11. Like the sending unit, we started by measuring the depth of the tank, which is different due to the fuel tray (bucket) the pump sits in. The nipple coming off the tank edge is there in case you need additional tank venting, and can be run to a charcoal canister of Tanks, Inc.’s rollover vent valve (PN VVR). For now, we capped this off and will only use the vent on the fuel pump assembly.

13. This razor cutter made cutting the hard plastic lines easy. Tanks, Inc. suggest warming the black fuel supply line with a heat gun to make it easy to slip over the inlet on the pump, but in our case we didn’t have to.

14. We then snipped off the end of the return tube at an angle per the instructions.

15. Here’s the pump fully installed with the return line in place. The black “sock” helps deaden the noise generated by the pump operating. Keep in mind that the assembled unit is too wide to fit through the hole in the tank. We found the easiest way to get it in was to remove the white return hose, slide the rest partially into the tank and then reinstall the return hose.

16. The pump was then installed and secured with the provided screws. Just like the fuel sender, we used thread sealant on the threads. If you want to ensure no gas seeps out through the gaskets you can give them a coating of Permatex Indian Head Gasket Shellac Compound.

17. As we mentioned, the tank is 1-inch deeper to make up for lost volume. This means stock tank straps won’t work. Fortunately, Tanks, Inc. includes properly sized straps with the tank. We forgot to order strap liners so we had to make some using stuff around the shop, but Tanks, Inc. sells them for a few bucks (PN SL24).

18. With the tank straps hanging in place, we lifted the tank into position and then swung the straps around and secured them using the factory carriage bolts and lock nuts. The tank isn’t heavy, but an extra set of hands and a tranny jack made it even easier.

19. And just like that, our new tank was installed under our 1968 Camaro and looking great.

20. Dumping fuel on the track during every hard turn can get you black flagged fast and smelling fuel odors can crimp your cruising style. Well, the answer to both is this billet overflow/vent canister (PN FIN001) from Finch Performance. As a bonus, it can vent two systems so once this is mounted to the floor of our trunk (using the included template) we will be able to vent our differential as well. We’ve used it before and it works exactly as advertised.

21. We still have to plumb it all in, but our Tanks, Inc. pump will feed to an Aeromotive EFI regulator mated to their 100-micron fuel filter before it flows up to our 440-inch LS engine that’s being built. It won’t be long until Project Track Rat is putting this new fuel system through its paces.