Roller vs. Flat Tappet Cams: Which is Better for Your Chevy?

Under the Curve: The Benefits of a Roller Lifter vs. a Flat Tappet Lifter 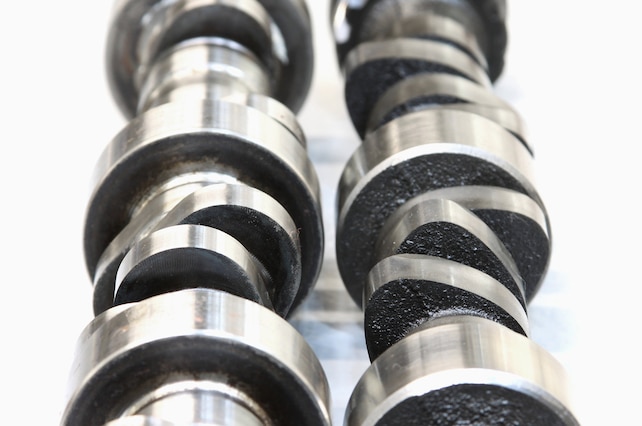 Picking the right valvetrain for your engine can be a daunting task. Solid flat tappet, hydraulic flat tappet, solid roller, hydraulic roller; these are the choices, made even more difficult due to the amount of outdated, and wrong, information floating around out there on the Internet.

What was true 10 years ago isn’t necessarily today, and having incorrect info can lead you to make the wrong decisions when choosing valvetrain components. For example, there was a time when anything above 6,000 rpm meant that solid lifters were the way to go. Today, there are a plethora of hydraulic lifters that can operate at high engine speeds.

One reason for that outdated theory is that hydraulic roller lifters are tall and heavy compared to flat tappet lifters, and also prone to pump-up. But, with the advances in hydraulic lifter design, namely short-travel lifters, tighter hydraulic piston clearances, and lightweight valvetrain components, many hydraulic lifter-equipped engines can easily handle 7,000 rpm or more.

The big advantage roller cams have over their flat-tappet cousins isn’t the reduced friction most people immediately think of, it’s increased tappet velocity (i.e., faster ramp rates). This increased velocity, as much as 30 percent, equates to more power. Because the valves can open faster, they are at higher lifts for a longer period of their overall duration. This is known as “area under the curve.” If the same aggressive ramp profile was used on a flat tappet, the edge would “dig” into the material and cause a failure.

The more aggressive ramp rate of roller cams typically requires higher spring loads to control the valvetrain motion. Another major benefit to the roller cam is increased durability. The roller design is far less likely to fail compared to a flat tappet since they are not as reliant on oil splash to keep things functioning properly. Also, with flat tappet cams, dialing in the right spring pressure is far more critical compared to the more forgiving roller design. This reliability is why the OEMs shifted from flat tappet to roller cams in production vehicles. It’s also what makes a roller valvetrain the best choice for hot rodded street engines.

Now, this isn’t some indictment of flat tappet-based valvetrains. There’s still a place for them in today’s engines, especially in racing classes that require them, or on extreme budget builds. And, even though they are still less reliable compared to hydraulic rollers, they’ve been refined over the years and are far better than they once were.

This was accomplished by an improvement in flat tappet lifter materials and new-age manufacturing processes (don’t expect that the knock-off lifters from overseas have incorporated these improvements). In short, today’s flat tappet lifters aren’t the same as what your grandpappy ran. Of course they are still held hostage by modern oils. Over the years the EPA has mandated that many of the additives — such as zinc dithiophospate (ZDDP), the one flat tappet cams need to survive — be removed for emissions reasons.

This means that the same oil you run in your modern daily driver could kill your flat tappet Chevy engine. The solution here is to always run oil specifically designed for flat-tappet engines or add a ZDDP additive package to off-the-shelf oil. Flat tappet cams are wallet friendly and the way to go if you’re on a budget, since the roller stuff does carry a price premium. Of course, flattening one cam will erase any savings, so it’s best to think long term when shopping engine parts.

All of this brings us to our 1967 Project AMD Chevelle. The big-block was fitted with a solid flat tappet valvetrain and we recently decided to make the swap to hydraulic roller. Why? Well, we wouldn’t have to lash the valves on a regular basis, we would no longer have to worry about what additives are, or aren’t, in our oil, but mostly we would be able to make more power with a roller cam of the same lift and duration.

1. In this diagram from COMP Cams it’s easy to see the relationship between the lifter and the cam lobe. With a roller tappet cam, designers have more freedom with their lobe design since they don’t have to worry about the edge of the flat tappet digging into the ramp.

2. With a roller cam, more tappet lift can be achieved without the added duration that would normally be required to “ramp up” a flat tappet to the added lift.

3. Whether solid or hydraulic versions, flat tappet lifters have one thing in common, they are flat on the end the mates to the camshaft. This flat face design is what limits the aggressiveness, and ultimately the performance, of the camshaft. Also, due to the fact that they wear-into the specific cam they are broken in with, they can’t be reused like a roller lifter can. This is a long-term item to keep in mind when you’re short-term price shopping a valvetrain.

4. Here’s an example of what can happen to a flat tappet lifter if things don’t go right. This was from a freshly built small-block that we were breaking in to dyno test. The flat-tappet design is far more susceptible to bad oil or the wrong spring pressures than a roller valvetrain.

5. And here’s our starting point, the 413-inch big-block in our 1967 Project AMD Chevelle. We recently upgraded the heads from GM iron to freer-flowing aluminum Edelbrock pieces, but the engine was still rocking a solid flat tappet valvetrain. Aside from the annoyance of regularly readjusting valve lash, we always worried about forgetting our oil additive and flattening the cam. For a street car, there’s a better way; and that’s going hydraulic roller.

6. No need for a blow-by-blow on tearing the engine down. We simply pulled the carb, distributor, intake, drive system, and balancer. To make room for the cam to slide out, we also drained and removed the radiator.

7. The engine already had a nice COMP double-roller timing chain, so we were set in that department. We pulled the three bolts and removed the chain and top sprocket.

8. Well, we should have known it wouldn’t be that easy. The cam hit the top of the front bumper before it was all the way out of the block. So, it was time to pull off more parts.

10. After getting a heaving coating of assembly lube, the new cam was slid into place.

11. We also remembered to order up a COMP cam button (PN 205), so we made sure to install it when we put the timing set back on. This, or a thrust bearing, is needed on a roller system to prevent the cam from walking. On a flat tappet the system the lobes are machined with a slight angle to offset the thrust movement.

12. Another key player in our new hydraulic roller valvetrain are these High Energy retrofit link bar lifters (PN 854-16). In terms of durability, these roller lifters are much better suited for street car duty compared to their flat tappet cousins. They also allow for more aggressive cam profiles while, at the same time, decreasing friction. The new lifters are taller than the old flat tappets, so we needed different length pushrods as well, 7.725-inch intake and 8.684 exhaust.

13. For rockers we grabbed a set of COMP Ultra Pro Magnums (PN 1620-16). Engineered from 8650 steel (300 percent stronger than 7075-T6 aluminum), these rockers will most likely outlast our engine. The steel means they won’t flex with increased rpm. Although the whole rocker is heavier than an aluminum one, they are actually 5 percent lighter where it counts, over the valve. Here you can see the Pro Magnum next to one of the stamped-steel stock rockers we removed from the Chevelle.

14. All 16 roller rockers were installed and adjusted. The problem showed up when we tried to put the stock chrome valve covers back on. The problem wasn’t so much the rockers as it was the poly locks. After some measuring, we figured we needed another half-inch of clearance.

15. The short covers were too short, but tall covers gave us problems as well. The solution was these cast-aluminum, finned valve covers from PML (PN 9739). For a few extra bucks PML also offers these valve covers in polished as well as black and orange powdercoat.

16. Our 11-inch brake booster was already pretty close to our stock covers, so there was no way they would clear any covers that would also clear our roller rockers. However, by moving to a new 9-inch Classic Performance Products (CPP) power brake booster we gained the needed clearance.

17. And with that, our project was done. The PML valve covers maintain our OE look and, to be honest, look far nicer that the chrome stockers.