Waking Up the Beast - An old project gets new life 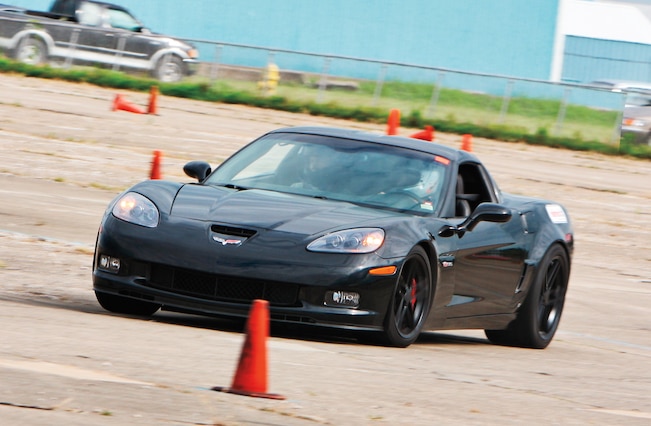 Project cars often take on a life of their own. One example is this ’08 Z06 that was started on its performance journey in GM High-Tech Performance magazine. Well, that book is gone, but the car remains. Since we like the idea of making fast cars faster we decided to pick up some of the build stories on what they aptly named project Track Attack. As you can tell by the name, its destination is the nearest road course and prior to this story it received a fortified rearend, courtesy of MTI Racing, and some stronger axles from The Driveshaft Shop.

The Vette was baseline tested at Palm Beach International Raceway (PBIR) a few months back, being rewarded with a 1:37 lap time around PBIR’s 2.1-mile circuit. Just for kicks, we clicked off an 11.6 at 123 mph on the PBIR dragstrip while we were there, too. We’ll more than likely take it down the 1,320 at some point again, however, its main focus is road racing—so every modification applied to this car will be geared toward that form of competition.

The next step in our build was to create more power with the stock LS7 7.0L engine. Five hundred and five horsepower at the flywheel is nothing to sneeze at, and it was pretty much paramount in terms of American horsepower levels when it was released in 2006. But with many of today’s ponycars now exceeding that number (the ’14-’15 Camaro Z/28 shares a version of this engine), we’re seriously going to have to step it up if we want Track Attack to be taken seriously.

Enter our friends at MTI Racing, SLP Performance, and American Racing Headers. After making a few phone calls and sending out a couple of emails, these three companies were happy to set us up with the hardware needed to take our run-of-the-mill C6 Z06 (if you can call it that) to the next level of all-around performance. For this round, Track Attack will be getting a cold-air induction system, long-tube headers and catted X-pipe, short-throw shifter, and fresh plugs and wires.

Down the line we have plans for more mods to help get the Z06 around a track faster, but for now let’s see what we can accomplish with a few bolt-ons.

02. Although the stock shifter is OK, a serious track car deserves serious shifter. Given this, MTI Racing sent us one of their Six Shooter short-throw shifters for our Z06 (PN MTI-106-001). The Six Shooter bolts right up to your manually shifted C5/C6, no modifications are necessary. Installation required the removal of the dashboard’s faceplate and top section of the center counsel.

03. We removed the bolts holding the shifter in place and slid in the Six Shooter. Once connected and with the bolts tightened, we put all of our trim back into place.

04. MTI offers customers four different shift knobs for the Six Shooter, and we decided to go with the white-handled version. It fits perfectly in the palm of our hand, which aids in making precise throws.

05. With the new MTI shifter installed, we turned our attention to under the hood, and that meant ripping out the stock exhaust manifolds, airbox, and spark plugs. American Racing Headers sent us over a pair of their stainless steel 1 7/8-inch headers that are not only going to increase horsepower and torque of our stock LS7, but they’ll come in handy later when we tackle the LS7 with a top-end engine package. Being stainless they won’t rust, so they’ll look great holding up to Mother Nature. The tubes arrived at our door uncoated, but we can always send them out later if we ever decide to throw boost at Track Attack or if we simply want to make exhaust cooling more efficient. But for now, they’re going in as-is.

06. Having a lift made this job way easier, so we set to work pulling the stock exhaust components and installing the new headers from underneath. This is the best way to go since it’s next to impossible to slide long-tubes in from the top on a C6.

07. With the headers in place we assembled the stainless exhaust pipes using the included clamps and slid them in place under our Z06.

08. Once in, we checked out the results and were very happy with the fitment of the parts, especially at how well the headers cleared the other components in the engine bay.

09. With the hood already open and the fuel rail covers, plugs, and spark plug wires out of the way, we slid in a fresh set of Delco plugs and MTI Racing’s Hot Spark wires. The wires are made with a high energy wire-wound core with a 7mm high-temperature-silicone insulation jacket. They’re typically manufactured to fit all standard LS-series engines. However, if your Vette just happens to be of the C6 ZR1 variety then worry not because MTI offers these wires in a shorter length. And if you happen to own an LS-powered pickup for the daily grind, MTI makes wires for those too.

10. Obviously, before we could install the SLP Blackwing cold-air intake, we had to remove the restrictive stocker first. The first order of business was to disconnect the battery, MAF sensor, and unclamp the elbow leading from the filter and into the throttle body. The SLP Blackwing cold-air kit for the C6 Z06 has been on the market for quite a while now, but thanks to its high quality and proven, efficient design these are still a very popular upgrade among Corvette enthusiasts. The air filter is washable and reusable so you’ll never need to replace it. The Blackwing comes with all necessary hardware, instructions, and even a built-in flow indicator (courtesy of GM) to tell you when it’s time to clean it. How cool is that?

11. With the new shifter, cold-air kit, headers, and X-pipe installed into the Z06, we strapped the car back down to the dyno. With nothing more than simply bolting the parts to the car, we picked up 25 hp and 19 lb-ft of torque to the tires. Later we’ll try some tuning with EFI Live and see how much power that brings to the party.