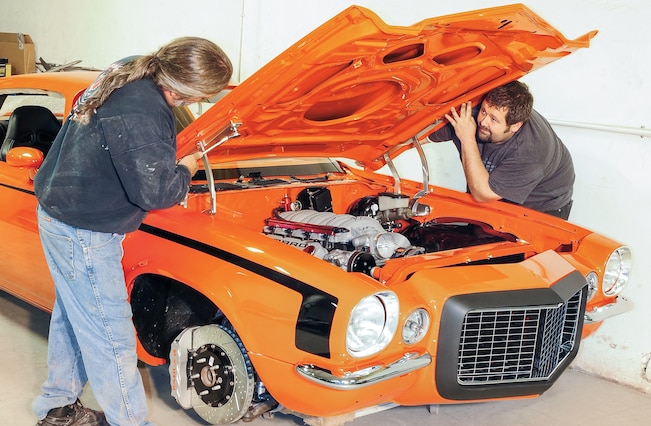 When coming around the corner on a full build there’s always plenty to do near the end. You could call this installment “bits ’n’ pieces” since there’s a little bit of everything addressed with even more that we don’t have the magazine pages to show you. It’s a time when you go over the car from front to rear and inside out to tidy up the loose ends. To make sure you tightened every last bolt and have everything in order before adding fuel and spark.

In the case of Orange Krate, our ’71 Camaro project, we’ve covered 29 installments (most of which were published in Camaro Performers magazine), and basically addressed every facet of the build. Peter Newell of Competition Specialties in Walpole, Massachusetts, handled the turn of every bolt, bringing his own signature edginess to the car’s newfound attitude. Study something long enough and an artist can evaluate it for the final icing—something that might have been previously overlooked. Case in point, with the rear of the car. Newell felt it still needed a bit more twist so he brought it back into the spray booth to add the final dazzle by giving the rear taillight panel some added custom-blended Planet Color vibe known as Midnight Lightning Pearl. The final visit to the spray booth also included a number of bits requiring a splash of Planet Color Big Bad Orange, including the bullet mirrors, inner headlight buckets, and front bumper fillers.

The reassembly of the body found it time to begin installing myriad parts, starting with making the doors whole again thanks to bits from Camaro Central (mirrors) and Ground Up (handles and locks). Also included is a 2-inch cowl induction hood from Ground Up, which was suspended by a set of attractive billet hinges from Eddie Motorsports. Up front, a complete Classic Industries RS front end conversion gives Krate plenty of venom, while a brilliant chrome rear bumper woke up the back end, especially when complemented by the Marquez Design taillights.

Keep in mind to pay particular attention to the fitment of the hood and trunk lid to the body, as these lines will make or break the final look of the car. All along, Newell and his team kept checking off the little things on the get-it-done list till it grew smaller and smaller.

By the time the car was set on its Boze Lateral-g wheels shod with BFGoodrich g-Force KDW tires, you could almost feel the lightning ready to strike. You’d think this is it, but there will be one final chapter before the car is shipped to the West Coast for its full feature where we wrap up some custom tweaks performed on the exhaust system.

01. To prepare the new sideview mirrors from Camaro Central for final paint, Competition Specialties’ Peter Newell started by using Sherwin-Williams prep-solvent to remove all contaminants from the surface.

02. The mirrors were then disassembled to allow full access to all related parts. A pretty simple grouping, but once apart it’s easy to get into all the tight areas to prepare them for gloss.

03. In order to protect the new mirror surfaces it’s a good idea to use some 2-inch masking tape across the outer surfaces.

04. All surfaces to be painted were then sanded with 3M 500-grit sandpaper. This included the outer mounts and inner mirror cones. A final surface pass was done with a red Scotch-Brite pad to ensure a nice even surface, in addition to all tight areas getting scuffed.

05. Once all the miscellaneous parts were blown clean and prep-washed for the final time, they were coated with Sherwin-Williams epoxy primer.

06. Newell then brought the parts to life by following up with a lustrous coating of Sherwin-Williams Planet Color Big Bad Orange.

07. To complement the dramatic custom side stripes applied to the car, Newell made the decision to black out the upper fascia of the taillight panel. He began masking the area with 2-inch masking tape. Once the baseline was established, he used masking paper and a razor to continue on while also covering all related openings to the rear panel.

08. Once masking is completed, the only area showing should be the one ready to be prepped for paint.

09. Since the area had previously been painted, it was wet-sanded with 3M 500-grit sandpaper. The sanding sludge was then washed clean from the surface.

10. 3M 1/4-inch blue fine-line masking tape was then used to establish the graceful line around the outer surface of the taillight pan.

11. The surface was then blown clean, wiped down with Sherwin-Williams prep solvent, and then wiped with a 3M tack cloth to remove any minute debris.

12. The spray gun was then loaded with a custom-blended Planet Color hue by Ray Williams at Sherwin-Williams Automotive Finishes called Midnight Lightning Pearl.

13. The final result brought a dazzling bit of decadence to the rear of the car.

14. Part of the final assembly included the installation of the fresh chrome door handles from Ground Up, using the new inner hardware to secure them in place.

15. In freshening up the entire car, nothing says “new” like a set of replacement door locks from Ground Up, which arrived complete with all new mounting hardware.

16. To secure the new mirrors in place, new mounting hardware and gaskets from Camaro Central made the installation a snap.

17. Coated in Big Bad Orange, the new mirrors look wicked, and the twist of a Phillips head screwdriver secured them in place, ready for action.

18. To give the trunk an all-new feel, a pair of inner taillight housings from Camaro Central did the trick as they were mated to the custom taillights from Marquez Design with Dakota Digital LED lighting elements.

19. The installation of the updated Marquez Design taillights added a distinctive complement to the updated rear taillight panel.

20. To bring added brightness to the mix, a new chrome rear bumper from Ground Up was secured in place with hardware from Totally Stainless (PN 6-8082).

21. With the assembly of the rear of the car almost complete you can finally get an idea of just how bitchin the view most competitors will see is!

22. Part of the RS conversion kit from Classic Industries includes perfectly replicated parking lamp assemblies to which we added a pair of Delta H4 halogen headlights and fresh headlight bezels from Ground Up.

23. With the new upper and lower valance panels in place, Newell proceeded to install the new RS parking lamps.

24. He followed by installing the Delta H4 headlights, retainer rings, and headlight bezels to complete the look.

27. Once installed, you can see the overall quality and fit and finish of the Eddie Motorsport hinges.

28. Wow! If this doesn’t make you break out in a cold sweat nothing will. The combination of the RS upgrade along with the cowl-induction hood, Boze Forged Lateral-g wheels, and massive Baer brakes sure makes a statement.

Camaro Resurrection: Bringing a Car Back to Life after Sitting for 20 Years.