Getting A Handle: Front Suspension Upgrades Net Huge Improvements on Our ’58 Corvette Project 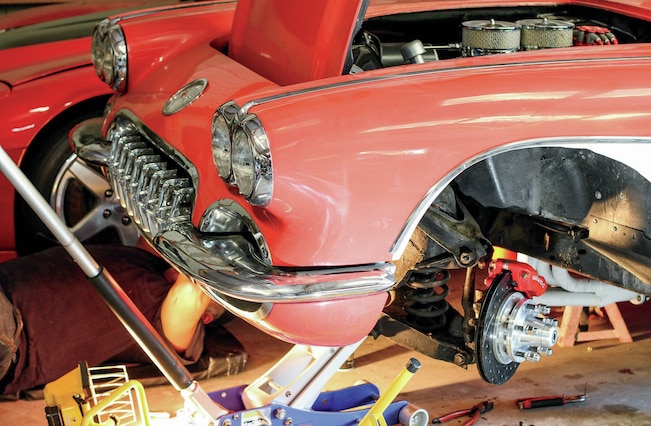 Purchasing a ’58 Corvette fulfilled one of Greg Lovell’s lifelong dreams, however its loose frontend and steering made the dream more of a nightmare. In fact, on his first drive he noted that it was the only thing preventing the Vette from being a total blast on the street. With so many advances in the aftermarket over the years, there is no reason to dread driving your classic Corvette. Chances are if you have a problem, there is an aftermarket solution. That was certainly the case for Greg’s C1 Corvette.

For a little background, let’s keep a few things in mind. The ’53-’62 Corvettes all sported the same basic frontend as a ’49-’54 Chevy passenger car. (Gasp!) Yes, it’s true. The bad news is that it isn’t exactly the most technically advanced setup. In fact, there are almost no bushings in the entire frontend, which means there’s plenty of metal to become fatigued and worn out over time. The good news is that there are plenty of interchangeable parts, such as ’53-’54 passenger car spindle uprights, which can help drop the front end by 3/4 inch. Unlike a more modern car that might use lowering springs, spindle uprights are the only way to lower first-gen Corvettes.

Our mission was two-fold: replace all of the worn-out parts in the ’58 Corvette’s frontend and make it lower to the ground for a more modern ride height. Accomplishing the second task turned out to be a little trickier than we anticipated since it came with ’53-’54 passenger car spindle uprights. The solution was to purchase a set of Fatman Fabrications’ drop spindle uprights for a total of 2.5 inches. These uprights move the spindle mount up as far as it will go for the lowest of the low. As for the frontend, rather than piecemeal all the parts we might need together, we made a quick call to Corvette Central for a frontend rebuild kit (PN 571001) and upper control arms (PN 571004) along with Bilstein shocks (PN 571104) and some other goodies we will go into later.

If you’ve been following this series at AntiVenom, then you’ll know that our ’58 Corvette project isn’t far from a complete overhaul. On the last two installments, we covered the brakes and rearend upgrades. Be sure to check out Part 2 of this story where we tackle the steering system and button up the frontend up for good.

01. Greg Lovell kicks things off at AntiVenom Skunkworks by unhooking the ’58 Corvette’s steering shaft. The cotter pin is pulled first, and then a flathead is used on the pin before rotating out to disconnect from the Pitman arm.

02. A total of eight bolts (per side) hold the front subframe to the C1’s frame. The radiator shroud must be removed to reach the nuts on the front two inner bolts. If the bolts are seized it actually negates this chore since you won’t need to get a wrench on the nut.

03. Here you can see these rotted old (factory) subframe spacer plates. We’ll be replacing those with new pieces in the Corvette Central kit.

04. As you can see, the engine does not connect to the front subframe on the C1, making this job a bit easier. Greg will tear down the subframe before sending it out to powdercoat and starting the rebuild process.

05. Greg starts on the spindle by removing the nut and then the pin.

06. The caps are pried off before pulling the retaining clips to get to the kingpin.

07. The kingpin is chiseled out with a mallet.

08. The cotter pins are removed from the third arm, along with the attached nut.

09. The entire third arm is then removed with four bolts.

10. Perhaps one cause for the frontend issues in the ’58 is that the spindle upright was not centered in the upper A-arm. Centering the control arms is a crucial part of the installation process, which we’ll cover later.

11. Greg unbolts the struts, first from the top, and then removes out the bottom. To save time, we are going to omit the dangerous part where Greg compresses the springs and unbolts the cross-shafts that attach the spindle uprights to the A-arms. However, you’ll get your fill of that during the installation in a second. Once you’ve removed the cross-shafts and finished stripping the crossmember, it is a good time to inspect the upper inner shaft on the crossmember to make sure that the metal bushings are in good shape (ours were). These are welded in, so replacing them is a bit of a pain (but not impossible).

12. Corvette Central sent us a new set of springs, subframe spacers, sway bar endlinks, bumpstops, upper control arms, and Bilstein struts (and shocks) to help overhaul the frontend of the AntiVenom ’58 Corvette. New cross-shafts (four per side) are not pictured, but central to the frontend rebuild kit (PN 571001) since they take most of the abuse in the suspension. The struts, shocks, and upper control arms are not included but are highly recommended. Greg also plans to install a front sway bar (hence the endlinks) to this former drag car to complement these additions.

13. When the bare crossmember came back from powdercoat, Greg bolted it up to an engine stand to make it easy to work on. The first piece to be bolted to it is the new Corvette Central (lower inner) cross-shaft. There are no rubber or polyurethane bushings in the control arms, just metal on metal, which is exactly why it wears out.

14. Greg checks and rechecks that the lower control arm is centered before the final tightening of the cross-shaft nuts.

15. Greg uses a measuring tape to ensure the upper cross-shafts are perfectly centered upon installation. The upper cross-shafts are a bit trickier than the lowers, since it threads through the crossmember and must go in from the front. The forward threads are larger than the rear. Replacement shafts (like these) are 0.008-inch oversized, making it even more difficult, and must be installed dry (without lube).

16. The factory nut (bushing) was used as an installation tool before greasing the Corvette Central nut for a final tighten.

17. Greg used a homemade spring compressor that consists of a piece of all-thread with nuts. The new spring is sandwiched between the control arms, and then the nuts are tightened to compress the spring.

18. Drop spindles, or spindle uprights, like these from Fatman Fabrications (top) effectively raise the mounting point of the wheel up into the wheelwell, rather than decreasing the suspension travel with lowering springs or coilovers like on a late-model car. It is the only way to effectively lower the ride height on a C1.

19. All of the cross-shafts eventually get greased, so it is crucial that you install the seals properly on the outer cross-shafts or they will leak profusely. The lowers are particularly difficult to install without tearing with this setup, and you may have to resort to using some O-rings.

21. Greg used a three-stone brake cylinder hone to bore out the spindle for the kingpin bushings, which will ride on a bearing and bushings. Shims are also used to keep the spindle tight to the upright since the gap is over 0.006-inch with the thrust bearing in place.

22. The kingpin is tapped into place with a mallet. It should be stiff to rotate (if not, it needs more shims). Just as you saw during removal, caps and locking rings secure it. The convex side of the cap goes outwards.

23. Last but not least, here is a little preview of what the AntiVenom ’58 Corvette will look like on the ground. Now that’s proper fender-to-tire gap! We’ll wrap this up next time, including the addition of some steering upgrades. Stay tuned!