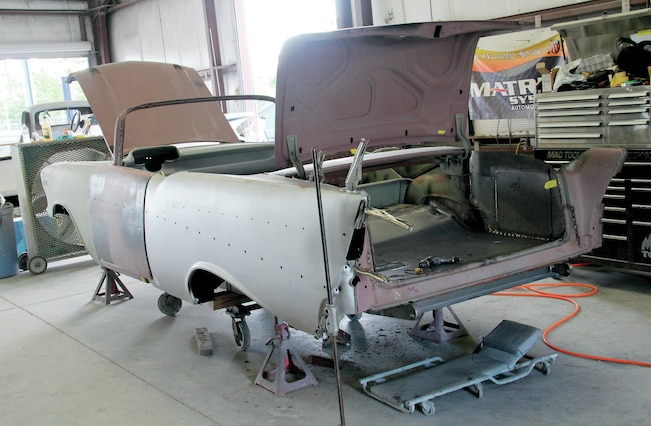 If you look at the “before” photo of the March Performance ’57 Chevy convertible project, then you know this Tri-Five has a long way to go. The folks at North Port Auto Body had their work cut out for them. The ’57 Chevy needed two new quarter-panels, one new fender, a floorpan, new firewall, and plenty of other fabrication that would ultimately set it apart from the hundreds of other cars on the SEMA show floor and muscle car circuit. I mean, talk about a car that’s been done before … the Tri-Five is one of the iconic cars in hot rodding—it’s not easy to build one that really stands out.

So let’s start from the beginning: Kim March, owner of March Performance, dropped off this ’57 convertible at North Port Auto Body in North Port, Florida. The plan was to have North Port do all of the metalwork and apply the paint. North Port outsourced the interior work, which was also on the docket. Meanwhile, Steve Ehrie at Saints & Sinners Hot Rod Shop would be doing all of the wrenching. This is a collaboration [of builders] with more years of experience than I have fingers and toes to count. The ’57 was to be a Pro Touring-style build with an Art Morrison chassis, custom paint, custom interior, big brakes, LS7 engine showing off March’s pulleys, and a paddle-shifted six-speed automatic transmission.

When I arrived at North Port, the TCI 6x tranny we covered in the first installment was in transit. However, the Art Morrison chassis had already been delivered and bolted up to the body. If you are not familiar, this mandrel-bent work of art uses 2x4-inch rectangular tubing. By itself, the frame is a huge upgrade. Usually, factory frames of this vintage are C-channel, welded in sections, and would flex with a gentle push let alone the weight of a Tri-Five body and 470 lb-ft of twisting force.

But, wait, there’s more! The Art Morrison chassis also introduces modern suspension geometry to the equation, 3-4 inches of lowered ride height, compatibility with modern engines and transmissions, and the ability to fit much larger rolling stock. The new independent front suspension uses a double A-arm setup with 5 degrees of positive caster (up from +2) for improved stability at speed, adjustable Strange coilovers, adjustable sway bar, and a modern spindle design that connects to a DSE rack-and-pinion steering. Art Morrison says it’s light-years ahead of the popular Mustang II front-end swap due to the optimized roll center stability, increased anti-dive, and a bumpsteer curve that matches the caster and camber curves.

Meanwhile the rear suspension contributes to these predictable and consistent handling characteristics with a “triangulated four-bar” arrangement, Strange coilovers, and an adjustable sway bar (a far cry from the factory leaf springs).

Even with a solid frame under the ’57, the March Performance showpiece still needed quite a bit of metalwork, starting at the rear. Both quarter-panels and the floorpan would need to be completely replaced, as is common on Tri-Fives. Replacing the quarter-panels was (thankfully) as easy as calling Danchuk Manufacturing, which has nearly every piece of metal you’ll need for a Tri-Five. We went ahead and ordered both sides (PN 16156, 16157) along with several other pieces you will see throughout this build.

Follow along as North Port Auto Body warms up its grinders and welders, and gets to work on March Performance’s ’57 Chevy convertible. We’ll have plenty more metalwork in the next installment as well, so stay tuned.

01. As delivered to North Port Auto Body, the ’57 Chevy convertible was not in pristine shape, but not exactly a rust bucket either. It was a great starting point for a no-bolt-left-unpolished type of build.

02. Before getting started, North Port did a quick mock-up of some proposed changes to the factory molding lines.

03. Here you can see the gorgeous Art Morrison chassis that now lies beneath the ’57 Chevy. The DSE rack-and-pinion steering is a huge upgrade over factory, even with a highway friendly 20:1 ratio (quicker ratios are available). The modern spindle and double A-arm setup with improved geometry is also a huge plus.

04. The triangulated four-bar rear suspension uses Strange coilovers and an AME-fabricated 9-inch housing. It’s not complicated, but it certainly works.

05. The frame comes with these rubber body bushings that get sandwiched between the body and frame. Though there are Heim joints and rod ends in the suspension, this will help prevent vibrations from transmitting into the cabin.

06. The stock frame (among other pieces of rusty metal) no longer has any use on this ’57.

07. To get started on the quarter-panels, the primer is ground off and the cut line is established.

08. The quarter-panels were cut off at the seam with a die grinder, revealing a very rusty inner quarter-panel (though very much salvageable).

09. Because there was a body vent that did not properly exit the body, it simply dumped moisture inside the quarter-panel. Technician Tom Wallace ground off the rust to start. Later, some modifications would fix this and other issues.

10. The trunk floor was also completely cut out. Let the fabrication begin!

11. Some nice, flat 0.040-inch (19-gauge) sheetmetal was cut to replace the floorpan and other pieces. Note the cutout for the gas filler neck.

12. This is the start of more custom modifications to the inner quarter-panel that would house a battery box on the passenger side. The wheelwells were rusted out, and by fabricating new pieces Tom could also account for the battery box.

13. Meanwhile the trunk lid was removed and ground down to prep for primer.

14. Fast-forward a bit and you can see the nearly completed trunk with an extra storage bin on the driver side for sound system electronics. This could also be used for mason jars of … let’s say pickles. Note all the seam sealer to keep any tire smoke out of the trunk.

15. A wider angle of the completed trunk shows the battery box on the passenger side with a matching hinge to the driver-side storage. Those intimate with Tri-Fives will also note the removed stock shock mounts, as this changes with the AME chassis. The rear body mounts have also been replaced in the process.

16. The fabricated battery box, along with the rest of the inner quarter-panel, was sprayed with some glossy black to keep it from rusting. It looks too nice to be so well hidden.

17. The inner quarter-panels were repaired in several areas in an effort to keep as much of the original car together as possible. At the very bottom you can see where the rocker panel rusted from the improperly drained moisture. The screw holes for the convertible top were also replaced with new steel (just out of picture).

18. The wheelwells now look even smoother than factory. The plan is to have a pretty substantial set of meats in here.

19. Like the factory inner quarters, the inside of the Danchunk outer replacements were treated to some fresh paint.

20. The quarter-panels are given many test-fits before final installation. These long pieces definitely require two sets of hands to get in place. And in case you are wondering, it is extremely hot in Florida in the summer.

21. It takes a couple of different methods to hold these heavy panels in place, including a trusty set of Vise Grips.

22. When the quarter-panels are installed for the last time and welded in place, the gaps should be about 3/16-inch. You might also notice the door handles have been shaved, and the holes have been filled in—more on that next time.

24. From the floorpan to the nose of the March Performance ’57 Chevy convertible, there is still plenty of work to go, so stay tuned!