Getting Colorful - Painting the Bottom of the Body and Then Setting It Down Over the New Art Morrison Enterprises Chassis. 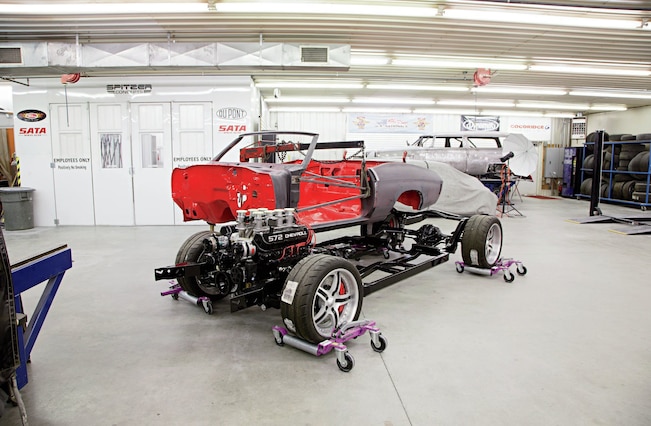 For some time now, we have been covering the resurrection of the rustiest project car we have ever taken on. The ’70 Chevelle XS convertible had seen better days (to say the least), but after countless hours of cutting, patching, grinding, and loads of new sheetmetal from Goodmark Industries, the car was ready for some color. Goodmark was founded in 1991, and for almost 20 years, its inventory has grown by leaps and bounds to keep pace with demand. That’s a great thing for us, as we practically threw the Goodmark catalog at our rusty Chevelle.

The body has been stuck on a rotisserie while the body and paintwork have been going on, but by the end of this article, the hull will be atop one of Art Morrison Enterprises’ killer chassis, getting us one step closer to completion. To have all this paintwork done, we enlisted the help of the skilled crew at Spitzer Concepts, which specializes in building street rods, pro touring machines, and restomods. These guys know their stuff, and their latest project—Jim Mitchell’s ’69 Plymouth Road Runner (dubbed “Road Rattler”)—is a piece of automotive art. Feeling pretty confident on where project XS resides, we sent photographer extraordinaire Robert McGaffin to document the work.

The paints used for this project are from Axalta’s (formerly known as DuPont) ChromaPremier line. This line of products has a few things going for it that appeal to the paint and body shops. Start at the Primer Filler, which has all the qualities of the high-build primer, with the curing times of a spot primer. All the products feature simple mix ratios for less chance for mixing errors.

Speaking of mixing, the primer, sealer, and clearcoat share a common activator, so there is a reduction in mixing issues and inventory needed. The activators are based on temperature ranges, and Axalta has one for just about any climate. The basecoat is offered in just about any hue imaginable, with solid metallic and pearlescent finishes available.

This story will cover the Spitzer Concepts crew as they epoxy, prime, and paint the interior, firewall, and underside of the XS Chevelle before they mount it to the Art Morrison chassis.

1. After the bodywork was complete and all areas were sanded with 800-grit paper, Bob Brown from Spitzer Concepts started masking off the surrounding areas of the quarter-panels and any area he didn’t want painted at this point.

2. It’s not necessary to cover the whole body. Just mask around the edges where the spray gun gets at the edge. Bob is using a coated paper instead of the normal uncoated paper, which you can tell by the shininess of said paper. The coated stuff allows the overspray to actually stick to the paper and hold on to it. The uncoated stuff can let the overspray turn to dust and release it back into the air, which could possibly show up on your next coat.

3. Once masked, the body is wheeled in the down-draft paint booth, and all areas to be painted are wiped with wax and grease remover. This removes impurities, allowing the epoxy sealer the perfect base to adhere to.

4. Axalta’s ChromaPremier line of paints covers very well and is user friendly. Another cool feature is the 24-hour recoat window that allows you add a second coat from the moment the first coat flashes off up to 24 hours later. Axata recently purchased the DuPont line of paints, so you will see different labeling and a new Chromax name in the future. All the components in the can will be made by the same chemist in the same labs—even the part numbers will stay the same.

5. Epoxy Sealer is used at a mix of 2:1. This will provide excellent corrosion resistance and is the perfect base for the basecoat.

6. The sealer is sprayed with a SATAjet 4000 B RP, HVLP gun with a 1.3 tip in 50 percent overlapping passes. The first coat is left to flash for 15 minutes before the second coat is applied. After the second coat, the sealer was left to dry for 90 minutes.

7. Per the instruction sheet, the paint is mixed in a 1:1 ratio.

8. Two coats of Blaze Red were shot in the interior, trunk, and firewall. The bottom received three coats, all with 15 minutes flash time in between.

10. The paint is applied by spraying 6-8 inches away from the panel in 50 percent overlapping strokes. The bottom and firewall were given three coats, and the interior and trunk received two coats apiece with 15-minute flash time in between.

11. The paint was left to dry overnight so it could be handled with no issues.

12. The next morning, the paper and tape were removed.

13. The body was brought out of the booth and set on jackstands so the rotisserie assembly could be removed.

14. An engine hoist was used to support the driver’s side so those jackstands could be removed, making room for the chassis to come in from that side. The passenger-side jackstands were located in the rocker area so the chassis would not have contact with them.

15. Spitzer has a set of Go Jacks that make rolling the chassis around super simple. These are fairly pricey, but under-wheel rollers can be purchased from Harbor Freight that can emulate these.

16. With the body up and the chassis on skates, the two were lined up. Then the hoist was lowered, dropping the driver side. Then it was moved to lift the passenger side of the jackstands. Then that side was dropped down.

17. After making sure everything was positioned properly, we put the solid Art Morrison body mounts in place and tightened them down.

18. Project XS is permanently sitting on its new foundation. Now the rest of the bodywork can be completed. The doors, decklid, and front clip will be installed and aligned. Then it will all be blocked and painted, but that’s a story for another month.