Newsletter
Sign Up today for our FREE Newsletter and get the latest articles and news delivered right to your inbox.
Home
Super Chevy
How To
Parts 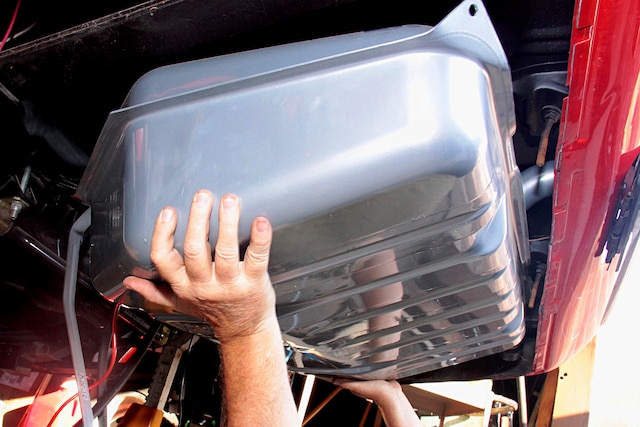 We all want convenience from our restomods. We like the lines of a classic Camaro or a broad-shouldered Chevelle. Yet, we’d rather have the convenience of a more reliable late-model ride. Not all of us want fuel injection and the mysteries thereof. Some of us like the more traditional carburetor for, if nothing else, the tinker value on a summer morning. Either way, we want the same reliability we’ve become accustomed to with our modern rides.

Few things drag an old Chevy down more than a rusty and dated fuel system. Half-century-old fuel system components are easily the biggest cause of breakdowns and no-starts. Thanks to the aftermarket, there are a ton of options for updating your fuel system with components far better than what your Chevy came with from the factory.

Back in the old days you would just order a replacement tank with another new, but still dated, tank. Today, thanks to the aftermarket, there are options to replace that old tank with something much better. Enter Aeromotive. Long known for their race-quality fuel system components, they are now offering complete, ready-to-rock replacement fuel tanks. Their Stealth line of tanks are completely baffled and come with pumps capable of supplying fuel to support whatever horsepower your mill is churning out.

For this exercise we are installing one of their Gen I Stealth tanks into a ’69 Camaro. The stamped steel and fully coated tank came with the high-volume Aeromotive pump and requested sending unit already in place, which really cut down on the installation time. Since doing this project, Aeromotive has upped their game with the introduction of their Gen II line of Stealth tanks (see sidebar), but the installation for either tank is about the same, so follow along as we bring this Camaro’s fuel system into the 21st century.

Because our ’69 Camaro is fitted with a fuel-injected LS it is already plumbed for EFI. This makes the fuel tank swap a slam-dunk. Note the way the braided pressure and return lines are properly secured to the chassis.

The new tank employs the Camaro’s factory fuel tank strap mounting locations without any modifications. Don’t forget to install the bolts on this end of the new straps that come with the kit.

The Aeromotive 18-gallon Stealth tank is a bolt-in replacement for the stock fuel tank, which makes installation easy. If you notice something different about this tank compared to stock, it’s that the corners have been cut off. This gives additional space for exhaust routing; something that really comes in handy with mini-tubbed cars. To keep the volume the same, the tank is about an inch deeper than stock, which is why they include the needed straps.

On the left is the electric fuel pump with all the necessary connections, including the vent. There is also a tank vent should you have a carbureted application. You have the option of using both of the vents or just one of them. Just make sure to plug the vent you’re not using. On the right is the fuel sending unit for your Camaro’s fuel gauge, in this case 0-90 ohm.

You may have to get fittings specific for your application. These O-ring seals should be lubricated with engine oil or a thin film of wheel bearing grease before the fittings are tightened to allow the O-ring to properly seat.

The pressure and return line fittings will get reinforced pressure hoses. The vent hose ventilates the tank as the fuel is consumed by the engine. It also allows for temperature changes, which cause the fuel to expand and contract. For the vent we chose a simple barbed fitting. The pressure line to the fuel filter and engine’s fuel injection is connected as shown to the outlet side of the pump. We also installed the vent hose and secured it with a clamp.

The fuel pump power is sourced via this heavy gauge lead, which comes from the fuel pump relay.

Here’s the complete Aeromotive fuel tank package with all of the connections, lines, and straps. Everything needs to be wired and plumbed before the tank is put in place since it’s impossible to reach once the tank is installed. The tank may be made from stamped steel, but the silver powdercoat gives it an attractive and durable finish.

The tank is light and easy to lift into place with a transmission jack (taking care not to dent or scratch the tank) or your God-given strength. It is always good to have a helper to secure the tank straps while you’re holding the tank in place. There’s no need to use a vented gas cap since the fuel tank is already vented.

The tank straps sport rubber insulators, which prevent the metal strap from digging into the tank, scratching it, or worse, causing a leak.

As mentioned, Aeromotive launched a new generation of their Stealth line of tanks, and the changes are impressive. The biggest change is Aeromotive’s patented and award-winning Phantom in-tank technology that enables a quiet, high-flow EFI fuel pump and baffle to maintain an abundance of fuel around the pump while ensuring consistent fuel delivery and driveability, even in low-fuel conditions.

Aeromotive’s Gen II Stealth tanks offer outlet and return ports along with power terminals in the original locations. This design enables flush installation to the vehicle floor and will not require strap modifications or spacers.

All Gen II Stealth tanks arrive completely assembled and ready to go. The fuel pump, fuel level sending unit, and fuel/electrical bulkhead are already installed, which saves a ton of time. If you have a carbureted fuel system you may still opt for the Aeromotive Gen I tank and, since it’s already fully baffled, you’ll be all set if you decided to add EFI at a later date.

The biggest visual change is that the Gen II tank uses the factory fuel sending location for the fuel inlet and outlet which greatly simplifies the installation. This is also where you supply power for the pump and pick up the signal from the integrated sending unit.

The foam and the bladder system (which can incorporate check valves) ensures fuel stays around the pump even in hard cornering.

Since the Gen II tanks come fully assembled we thought you might like to see what’s going on inside. The foam and bladder system was previously seen only in high-end racing fuel cells, but with the Phantom tank this system can now keep your Chevy supplied with plenty of fuel, even under hard cornering and acceleration.

Installation, plumbing, and wiring for the new generation of Stealth tanks is as easy as it was with the previous generation.

Photography by Jim Smart and courtesy of Aeromotive