Our SS396 project gets seam-sealed, just like the factory did it back in the day. 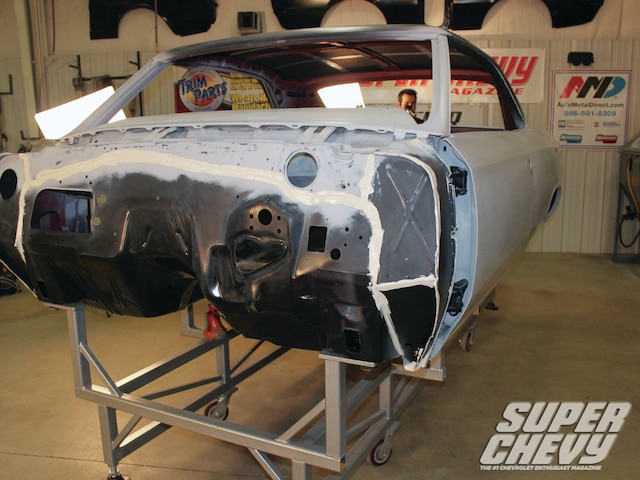 The AMD Chevelle project is getting closer and closer to being finished. Craig Hopkins and his crew (Aaron Hopkins, Caesar Brecino, and Chris Dyer) at C. Hopkins Rod & Custom in Commerce, Georgia, have been doing an excellent job bringing the original 1967 SS396 Chevelle back from the scrap pile. In this installment, Craig is going to show the proper places to apply seam sealer for a factory-original appearance.

Seam sealing is a necessary step to prevent premature rusting of body panels. Most of the areas that get seam-sealed are where two body panels come together and get welded. Even though they are welded areas, it's just a bunch of spot welds instead of a fully welded joint. That means if left unsealed, water can penetrate the overlapping pieces of steel and sit there, turning into iron oxide—what's commonly known as rust. We despise rust and would prefer it not to show up on the Auto Metal Direct Chevelle. Craig will be seam-sealing all the areas just like the factory did back in 1966.

If you've missed the previous stories, let us catch you up. The first installment showed how to properly strip the car down to a bare skeleton in preparation for all the new AMD sheetmetal. The second story showed new floor, quarters, roof, and other panels from AMD being welded in place. The third installment showed the proper procedure to re-skin a door with AMD's GM-licensed door skin. The fourth talked about blocking out the newly installed AMD sheetmetal to get it nice and straight.

Like we have mentioned in the other stories, the idea of this project is to show you how to take a worn-out muscle car and transform it into an assembly-line-fresh piece. The work on this car was pretty extensive, so think of this as a worst-case-scenario build.